Largest Dog Breeds With Pictures That Will Leave You Dumbstruck

Wondering which is the largest dog breed in the world? Several breeds, including Great Danes, Irish Wolfhounds, and English Mastiffs are vying for this title.

Wondering which is the largest dog breed in the world? Several breeds, including Great Danes, Irish Wolfhounds, and English Mastiffs are vying for this title. 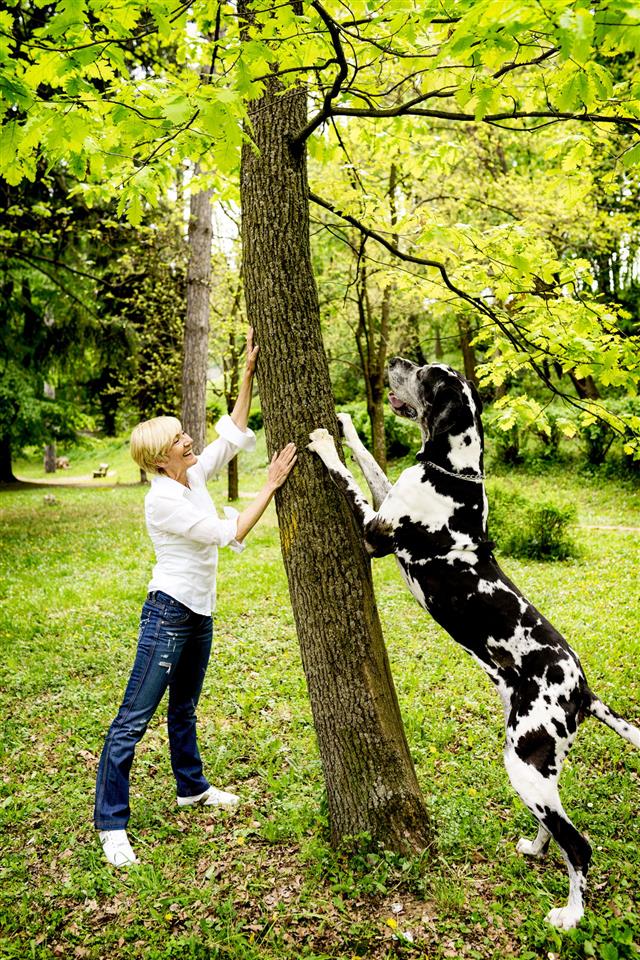 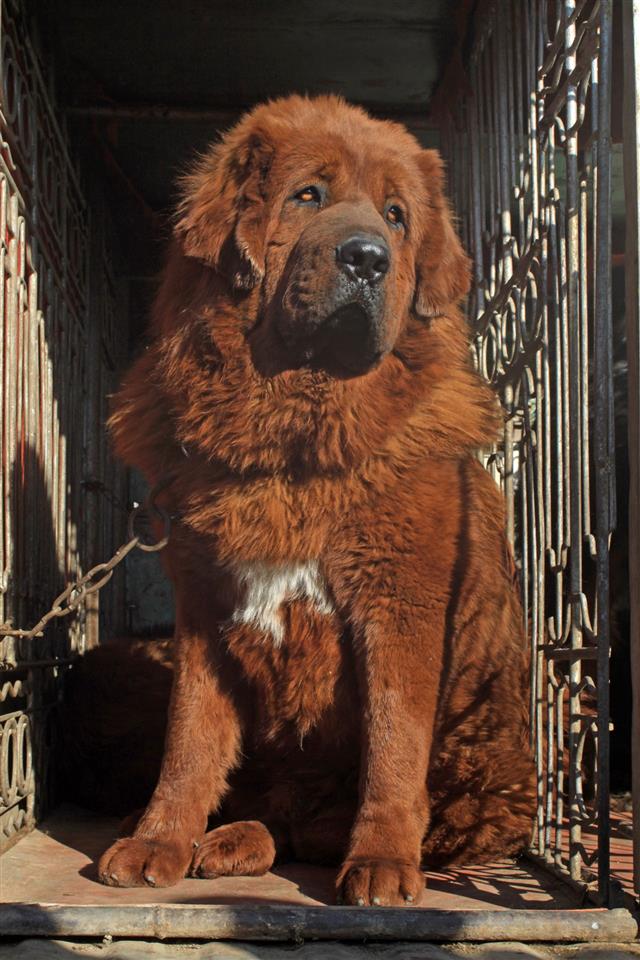 The Death of a Great One!

It’s through careful breeding that we now have such diverse number of dog breeds. So much so, that we have the ‘Basenji’; a breed that doesn’t bark, we have the ‘Chow Chow’ that has a distinct blue tongue, ‘Great Danes’ and ‘Irish Wolfhounds’ that compete for the tallest dog title and ‘The English Mastiff’ which is the longest and heaviest dog breed currently existing. Usually, when people ask about which is the largest breed of dog, experts often wonder whether the question refers to the tallest and longest or the heaviest? In order to minimize this confusion, this DogAppy article has listed some dogs according to their height and weight.

If one had to look into the history of this dog breed, one would find a lot of blood and cruelty, all in the name of sports like bull baiting and dog fights. Even though this dog breed may have an aggressive past, they make ideal pets and are just what a loving family would need.

Zorba was the heaviest Old English Mastiff to have ever been recorded. In 1989, the Guinness Book of Records measured Zorba, who back then, was 37 inches when standing on his hind feet, was 8 feet 3 inches long from his nose to tail, and weighed 343 pounds.

The Great Dane is truly a gentle giant. This dog breed was developed in Germany. Its ancestry can be traced to that of the Old English Mastiff and Irish Wolfhound. The body of the male Dane is squarish and tall, while females are longer.

Zeus, a Great Dane from United States was recorded as the tallest dog in the world by the 2013 Guinness Book World Records. Zeus, measures a staggering 44 inches from his feet to withers, 7 feet 4 inches tall while standing on his hind feet, and weighed 155 pounds in 2011.

Excluding the Guinness Record won by a Great Dane, the Irish Wolfhound has been recorded as the tallest dog breed in the world by the American Kennel Club. This dog breed is not heavyset and is an excellent hunter and runner. However, it does not make an efficient guard-dog unless explicitly trained.

This dog breed does not bark much and is generally quite. It tends to get melancholic when left alone for too long and can become destructive under such circumstances. The Irish Wolfhound is great with children and is protective about its master and family members.

The Scottish Deerhound is slightly smaller than the Irish Wolfhound and is related to the Greyhound. This dog breed was originally used for hunting the Red Deer. Its large and tapered body enables this dog breed to run at tremendous speed.

The Scottish Deerhound also has a distinct double-suspension galloping motion that provides it agility and stamina. Its amiable and eager-to-please disposition makes this dog a suitable pet but not the best guard dog among the lot.

As the name suggests, the Anatolian shepherd dog is originally from Anatolia, Turkey. This giant dog breed is an exceptional livestock guardian dog and will fiercely protect its loved ones. This breed has black markings on its ears, muzzle, and around the eyes. Being a large dog it is naturally careful and kind with children and smaller animals.

The burly, fluffy, and gentle St. Bernard dog is one of the biggest international Molosser breeds. This giant Swiss Mountain dog breed was used for searching and rescuing people who were stuck in blizzards and avalanches.Benedictine V Schwarzwald Hof was the biggest St. Bernard to have ever been recorded by the Guinness Book of World Records, and weighed a whopping 315 pounds!

This dog breed was originally used as a working dog in Leonberg, Germany. In 2010, the Leonberger was recognized as a ‘Working Dog Breed’ by the American Kennel Club. This dog breed has a distinct black mask and dark coat which was developed by crossbreeding with the Newfoundland dog breed.

The Leonberger almost died-out during World War I and II, when these dogs were used for pulling ammunition vehicles. Apart from being an excellent watchdog, the Leonberger dog breed is a strong swimmer and is still used by the Canadian government as a water rescue dog.

The snow-white Kuvasz is actually of Tibetan origin but was brought to Hungary several centuries ago. Even though this dog breed was originally preferred as a royal guard dog, it has become a common household pet in the last century.
Today, the Kuvasz is used for guarding livestock. Shepherds prefer keeping these dogs as pets because they can easily spot their dog, while trying to ward off any wolves that may attack the livestock in the night.

This ancient North American dog breed was preferred as a royal guard dog by the French during the 17th century. Today, it is used as a livestock guardian dog because of its innate instinct to protect its flock and smaller animals. The Great Pyrenees was originally developed in Central Asia and its introduction into Europe was because of the Aryan migration.

This dog breed was originally used by fishermen as a working dog. The Newfoundland dog breed adores water and is an excellent swimmer and guard dog. Its webbed feet, muscular body, large size, and strength makes it an intimating and impressive dog breed. The largest Newfoundland dog to have ever been recorded, weighed 260 pounds and was 6 feet long when measured from its nose to tail.

The (Do Khyi) Tibetan Mastiff is a primitive and domesticated dog breed from Central Asia. It is a high-altitude breed that has evolved to survive the harsh winters of the Himalayan ranges. The breeds that were developed in the West were comparatively much bigger, because of the quality of nutrition that was provided to the dogs. Careful selective breeding has also contributed in boosting the size and weight of this dog breed.

The Bullmastiff was made by cross breeding the English Mastiff with the English Bulldog. This dog breed was originally developed in the 19th century to guard estates and assist gamekeepers. These dogs rarely bark and are able to trap the game without damaging it. This dog breed is extremely strong and is a natural guard dog that will instinctively sense danger and protect its family members.

The Dogue de Bordeaux or the French Mastiff is one of oldest dog breeds from France. Even though the Bordeaux Mastiff may be comparatively smaller than the other giant breeds, it is definitely one of the strongest dogs on the block. This dog breed has been used for guarding castles, flocks, and pulling heavy carts.

There are several theories regarding the origin of the Dogue de Bordeaux. Some believe that it is older than the Bulldog and Bullmastiff and is related to the Tibetan mastiff, while some think that this dog breed may be related to the Neapolitan Mastiff or the extinct Dogues de Bordeaux of Aquitain.

So, you see, it’s hard to pinpoint one dog breed as the best among the lot. That being said, the English Mastiff is widely considered to be at the top of the large dog breed list. 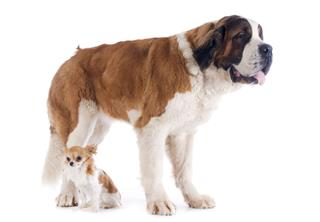 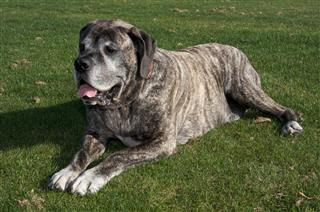 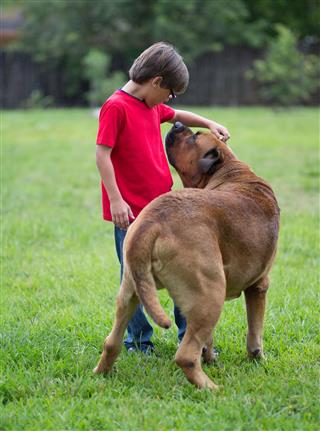 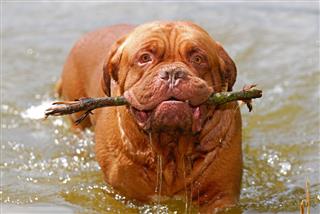