Why do Dogs Eat Dirt?

Sometimes dogs do the strangest and funniest things. And while some can be fun to watch, others might be a case of serious concern. Dogs eating dirt is one such example. If your dog is eating dirt, and you are wondering why, this DogAppy article enlists some of the reasons as to why dogs eat dirt. 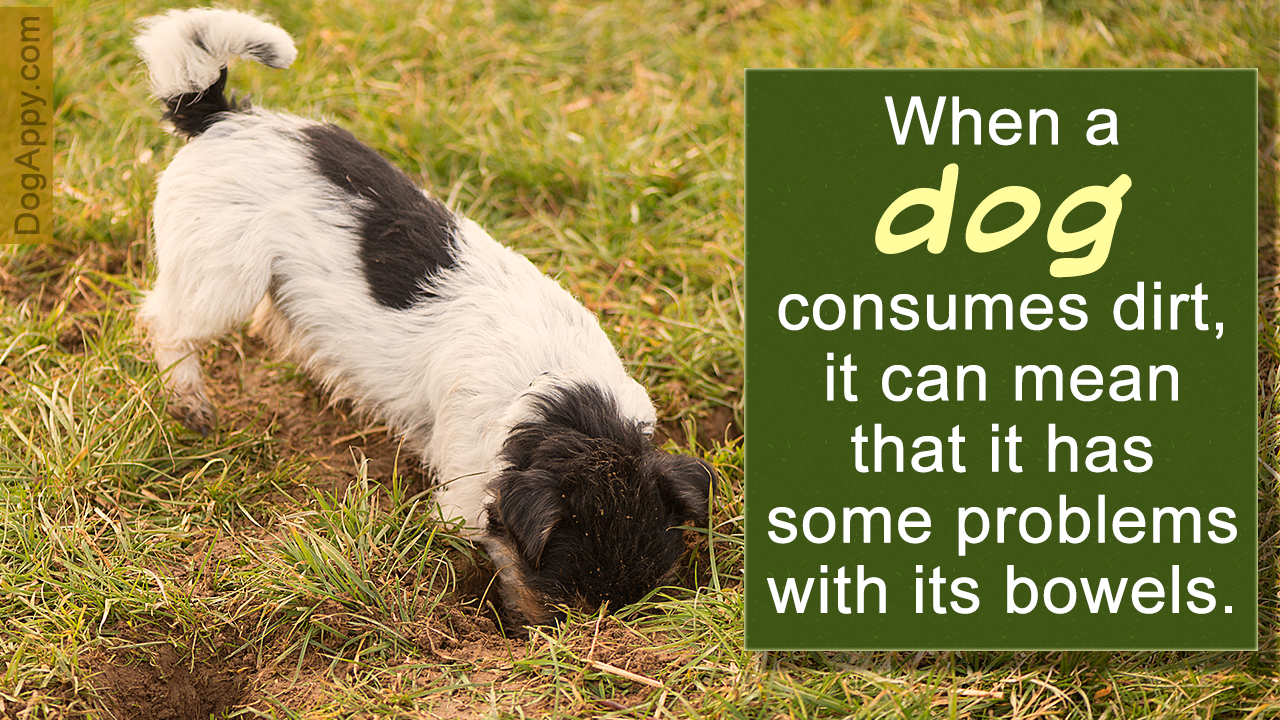 Sometimes dogs do the strangest and funniest things. And while some can be fun to watch, others might be a case of serious concern. Dogs eating dirt is one such example. If your dog is eating dirt, and you are wondering why, this DogAppy article enlists some of the reasons as to why dogs eat dirt.

To stop your dog from eating dirt in your garden, spray the soil with red pepper sauce or bitter-tasting liquid.

Many owners frown or express disgust when they catch their dog munching on soil, sand, or dirt from houseplants. What they fail to realize is it is a common action among dogs. Not every pet will eat dirt, but given the circumstances many will. There are umpteen number of reasons why dogs eat dirt, but observing your dog can give you helpful clues. For example: If a dog starts digging a hole, the owner might get the impression that he is eating dirt. But actually the dog is eating some grass roots, grubs, rabbit poop or maybe the food which he hid last week. Yes I know! gag all you want, but every dog engages in this dining trend and for reasons which justifies their action. Though it is not a bad sign, but it may become into something serious if they get addicted to it.

If that is the case then you need to keep an eye on your canine friend to discover other signs, that he is eating dirt because of some underlying medical condition which needs to be diagnosed. Many times veterinarians don’t really understand the reasons for dog eating dirt, but they have stated probable causes as to why dogs eat dirt and sand.

Dog Eating Dirt: What it Means?

One of the root cause of dogs eating dirt is maybe their diet lacks in certain minerals. In this case, he will try to obtain the missing minerals from dirt which he requires to stay healthy. Soil and dirt contain many minerals, which are not available in packaged food. If your dog is consuming dirt frequently, then it’s a sure sign his food lacks important vitamins and minerals. You can have a look at the food label and cross check with the list of essential minerals that all canines need. If the food lacks these minerals, then switch to something better to increase his vitamins intake. You can avoid this problem by feeding him with a high-quality dog food.

The main cause of a dog eating dirt when sick is if he ate something that has made his stomach upset. Eating dirt or soil helps them to get rid of the stomach cramps or the particular food item which has caused the problem. It can be a plant or maybe human food, which can be distressing him. Often they feed on grass to throw up and put an end to their misery, but in this case they will eat dirt to find some relief. If he consumes a lot of dirt, that means something is seriously wrong with his bowels.

When a dog is bored he tends to develop any habit to pass time. You can frequently catch your dog licking its toes, chewing on the furniture or the walls, and lastly they may eat soil. Munching on dirt and mulch may be just another pastime. Eating dirt is also a method of getting their owner’s attention. Dogs are sensitive animals that crave for human companionship, especially if there are no other pets in the house.

Some dogs prefer the taste of dirt, maybe they develop a taste for the soil in their backyard or a park which they visit everyday. If there are small insects like snails in the dirt, that the dogs love to eat then dirt is just a part of such meals. Compost or fish residue fertilizers mixed in the soil is another thing which attracts the dogs. Since they are omnivores, they don’t just stick to meat, they also prefer plants. Sometimes even smell attracts them to dirt, particularly if it has been marked with other dogs pee. They may eat the dirt to understand its meaning.

Dogs generally have the tendency to chew non-food items like soft toys, draperies, socks, shoes. It is considered as a normal behavior between dogs. But excessively eating non-food items is a disorder called pica. Although pica occurs if your dog food lacks few minerals, but it occurs in puppies out of boredom. This once in a while eating disorder can become a compulsive habit and your dog will start consuming inedible objects such as plastic bags, human clothing, wooden things. Rock eating is a common thing with dogs suffering from pica. This condition may develop due to endocrine problems, malabsorptive diseases, or iron deficiency.

Many times owners provide one single meal to their dogs. Its natural after all the playing, walking, and lazing around your dog will feel hungry. To curb its hunger pangs, it may resort to eating dirt, mulch, and sometimes grass. It is a common sight to see stray dogs feeding on dirt.

While occasionally letting your dog lose on dirt is acceptable, but a tendency to dine on dirt for an extended period of time can cause a lot of health issues. Discuss with your vet if your dog won’t stop eating dirt. Dirt and soil contain many harmful chemicals and insects which can be detrimental to your dog’s health.