Well, the dog's not actually blue, in a manner of speaking, but lands somewhere in the gray spectrum veering towards a hint of blue. DogAppy tells you all the things you need to know about the blue Chihuahua. 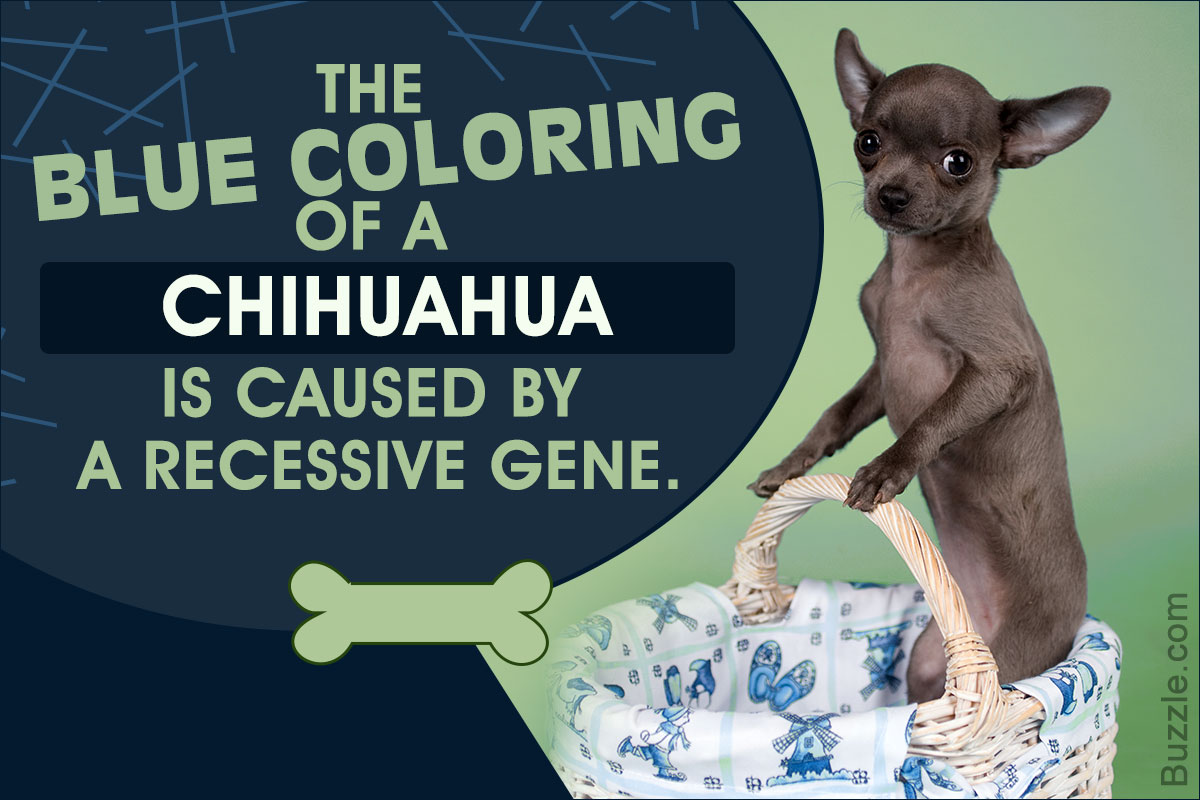 Well, the dog’s not actually blue, in a manner of speaking, but lands somewhere in the gray spectrum veering towards a hint of blue. DogAppy tells you all the things you need to know about the blue Chihuahua.

Even the tiniest Poodle or Chihuahua is still a wolf at heart.
―Unknown

The bottom line remains that a Chihuahua, or any other dog for that matter, is a dog. The color of his coat has no bearing whatsoever on his personality. Therefore, if you’re thinking of bringing home a Chihuahua, the color of his coat should be the last thing on your mind. There are more important factors to consider when you’re getting a puppy, especially regarding its health condition, exercise, dietary requirements, personality traits of the breed, and the overall health condition of the parents, if possible.

Ensure that you get a clean bill of health for the puppy from the breeder and a vet as well. A Chihuahua, regardless of the coat color, comes with some rather colorful characteristics, which make it a very unique pet. But if you’re insistent about the blue, here’s all you need to know about them.

About the Blue Chihuahua…

► The first thing you ought to know is that the blue Chihuahua is NOT a breed. It is merely the hue of the coat, just like black, white, chestnut, fawn, silver, or any other. Thus, this dog is not known to possess any special characteristics which separate it from the others of the same breed.

► So, what does a blue Chihuahua look like? Well, their coat has a dull silver-gray color bordering on black, with a tinge of blue. The blue is especially apparent in sunlight.

► Dog registries do not make any distinctions on the basis of coat colors for Chihuahuas, which means that, no color or pattern in more prized than another. However, blue Chihuahuas tend to count among the rarer lot, and are therefore coveted.

► Breeders do make attempts to pass off a gray or black pup as a blue, and worse, tend to charge big bucks for it as well. Therefore, it is imperative that you only deal with a breeder of repute; or better, choose to adopt from a shelter instead.

► Always make sure that you personally inspect the puppy under a bright light or preferably sunlight before you seal the deal. Along with the fur, you should be able to see a blue tint on the paw pads, eye rims, and noticeably, the nose. Also, the color can also be part of a patterned, a tri-colored or multicolored coat.

► A blue Chihuahua can be an apple-head or deer-head, and may be born to parents that are colored black, tan, chocolate, fawn, or even white. This is because, the gene causing the blue coloring is recessive, and may appear two or three generations apart.

► Thus, it is safe to say that the coloring and pattern of the parents’ coat is not indicative of how the offspring will turn out to be. The parents must carry the recessive blue gene in their line of heritage for a chance at giving birth to a blue puppy.

► Note that it is considered unethical to breed two blue Chihuahuas together. Studies have indicated that doing so may result in the litter being born with serious health concerns. Blue is considered to be a diluted color, and the gene causing it may also carry certain hidden defects, the most common being issues with the growth of the coat and the overall condition of the skin.

► Also, despite the obvious warnings, even if two blues are indeed bred together, it does not guarantee an offspring of the same hue, as the gene happens to be recessive.

As mentioned at the beginning, it is more important to pay attention to more pressing issues like the dog’s temperament and requirements, rather than focusing on its looks. If you’re thinking of bringing a Chihuahua home, pick the one who steals your heart, be it blue, brown, or fawn.