A Quick Guide to Sea Anemone Care for All Aquarium Lovers

It is not easy to take care of a sea anemone. A new aquarium or an inexperienced owner can lead to its death. 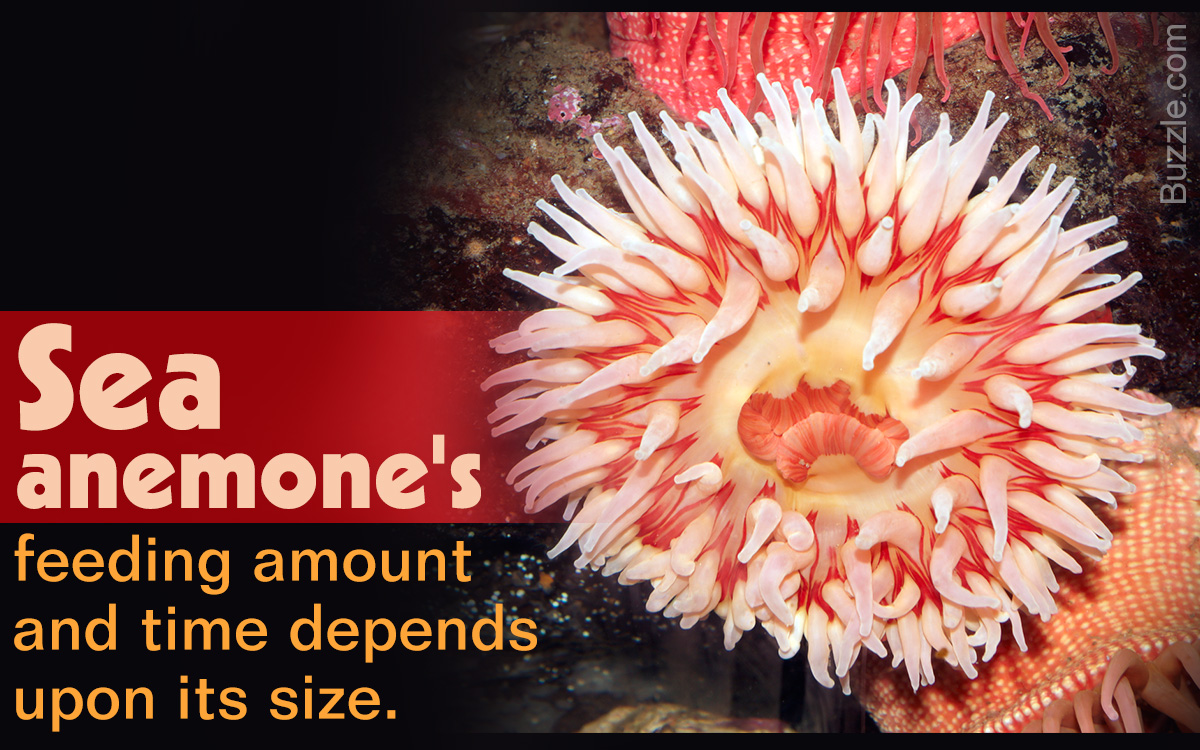 It is not easy to take care of a sea anemone. A new aquarium or an inexperienced owner can lead to its death.

Sea anemones belong to the phylum Cnidaria and they are usually found attached to rocks or to the base of the sea. They move very rarely and sometimes attach themselves to the hermit crabs for locomotion. They have a sac at the base which has a sticky foot that gets attached to the rocks. The upper part is fleshy and consists of many tentacles which surround its disc-shaped mouth. Sea anemones are very difficult to take care and require a lot of attention. Get some important sea anemone care tips in this write-up and do not forget to scroll down for some interesting facts about these creatures.

How to Care for Sea Anemone

Sea anemones are very sensitive animals. So it is very important to keep their environment and other aspects under control. They may not survive in the hands of people who do not have much experience of maintaining sea life or saltwater aquariums. Their survival may be doubtful if kept in a new aquarium.

Get a Perfect Aquarium

Sea anemones can grow up to 2 m or 6 ft in diameter. Hence they require a large aquarium. Keep the anemones in at least 30-35 gallons of saltwater. A larger aquarium can give a better environment to the anemones and will help them grow healthy. Place three to four large rocks inside the aquarium as the anemones love to attach themselves to the rocks and very rarely move from one place to another. Open water pumps in the aquarium can be dangerous for them as their tentacles can get easily caught in the pump and can even lead to their death. Similarly, a water heater can burn the tentacles of an anemone. Hence it is better to place the pump and heater in a separate slot in order to avoid accidents.

It is very important to maintain the environment in the saltwater aquarium. Maintain the temperature of the fish tank between 75.2º F to 82.4º F. The salinity levels should be between 1.020 to 1.026. You need to have a strong filtration system. Sea anemones require abundance of light hence a high watt metal halide will be best for these creatures. You need to check the temperature, quality of water, salinity and pH on a regular basis. Change 15 to 30 percent water in every three to four weeks for aquarium maintenance.

Sea anemones share a symbiotic relationship with clownfish and hermit crabs. Clownfish eat algae from the surface of an anemone which keeps the anemone clean and healthy. Anemones eat the leftover food by the clownfish. However, you need to research a bit about the species of clownfish which can best suit the anemone. Studies show that the sea anemones hosted by the clownfish live longer, healthier and do not require frequent feeding compared to the anemones without the clownfish. In a symbiotic relationship with the hermit crabs, anemones are usually seen attached to the hard shell of the crabs. As the crabs locomote in search of food, anemones also come in contact with abundant food. In return, anemones save the crabs from predators with the help of their stinging tentacles. So, if you have a sea anemone or are planning to get one, then don’t forget to give them companions.

There are nearly 29 species of clownfish and 10 species of anemone which are commonly seen associated with each other. Clark’s Clownfish (Amphiprion clarkii) associates with all these ten species of anemones unlike the other clownfish species. For example: Amphiprion ephippium (Red Saddleback) normally selects Heteractis crispa (Sebae) anemones.

Following are the example of anemone species which go well with the species of clownfish.

Sea anemones can be fed at least once or twice a week. They do not require regular feeding as they also eat the food leftover by the clownfish. The amount of food and the feeding time also depends upon the size of the anemones. Larger species require frequent feeding. You can feed them small worms, chopped fish and small shrimp. Their growth also depends upon the food. More food will result in faster growth and reproduction as the food will provide required protein and energy to perform the task. Presence of clownfish facilitates very less or no feeding, as the left over food of clownfish is eaten up by the sea anemone. But if there are no clownfish, then you need to feed the anemones directly. You require to feed them once a week. The food you give, should not be more than 2 inches in size as anything larger than this will be rejected by the anemones. There are some anemone species which should be fed at night. Remove the uneaten food from the tank after an hour.

Sea anemones, like any other animals, may face diseases and health complications. It is very important for the owner to take care of it so as to get them treated in the earlier stage. If you observe color loss, lack of activity, shrunken tentacles, loss of appetite, etc., then these may be signs of serious health problems. In addition to this, if you are feeding the other fish of the aquarium with some medication then remember not to feed them with copper based medicines as it can be consumed by the anemones which can be poisonous to them.

How to Transfer a Sea Anemone

If you want to transfer a sea anemone to another aquarium, you need to be very careful specially if it is attached to a rock. Move both anemone and rock together from the aquarium. If you don’t want the rock then place an ice cube on the edge of the anemone’s base. As a result of reflex action, it will release its grip on the rock. Do not pull or forcibly remove the anemone from the rock as it may result in tearing of the tissues which may lead to its death.

Tips for Buying a Sea Anemone

It is very important to get the right species and that too a healthy one, when you want to keep a sea anemone as a pet. There are around 1100 species of anemones but very few can adapt to the aquarium, or in simple words, handled by you. Selection of the species will also depend upon the size of the aquarium. For example: Epicystis crucifer (Rock Flower Anemone) and Bartholomea annulata (Curly-Cue or Rock Anemone) are among the easiest species to keep as they grow a maximum of 8 inches and can be kept in a 30 gallon tank, whereas Entacmaea quadricolor (Bubble Tip Anemone) and Macrodactyla doreensis (Long Tentacle Anemone) can grow up to 20 inches and hence require a tank of at least 50 gallon capacity. The following tips will help your to get a healthy anemone for your aquarium.

Anemones are known for their beautiful colors, hence, the very first thing to notice is the color of the anemone. If the anemone is white in color, then this means that it has released its zooxanthellae, which it usually does when it is stressed. So, do not buy it.

Usually anemones are attached to something, usually rock. But if it is not, then it may have some problem.

They are sticky to touch.

There tentacles should not be short and thin.

They should not have any injuries or tear in their foot or base.

Sea anemone got its name from the beautiful anemone flower and hence it is also known as flower of the sea. Its vibrant colors and beautiful tentacles give it a very plant-like appearance. Learn more about these amazing creatures.

Their tentacles consists of cnidocytes. Cnidocytes are cells which help them to protect themselves and also help in catching prey.

These tentacles are poisonous and paralyze the prey by stinging.

The size of the tentacles ranges from ½ inch to nearly 6 ft in diameter.

The disc-shaped mouth is the only passage and therefore it behaves both as a mouth and as an anus.

They maintain a symbiotic relationship with clownfish and can become good friends with hermit crabs.

In saltwater aquariums their average life span is just 21 months.

Stichodactyla sp. (Carpet Anemone), Heteractis crispa (Sebae Anemone) and Heteractis magnifica (Magnificent or Ritteri Anemone) are among the most difficult anemones to keep as they are very large in size and comparatively more venomous. Magnificent anemone is the most difficult to keep as it grows up to 36 inches and requires about 90 gallons of water. These species require specific amount of water, lighting and pressure which makes it difficult to maintain. For beginners, Entacmaea quadricolor (Bubble) anemone is the safest and best option if one wants to keep clownfish too. Handle the sea anemone carefully as they can sting like bees. Always wear gloves and avoid direct contact with these creatures while working in the aquarium. Bring a sea anemone only when you are completely prepared to take care of this beautiful creature. And yes, do not forget to bring clownfish to give them their best companion. 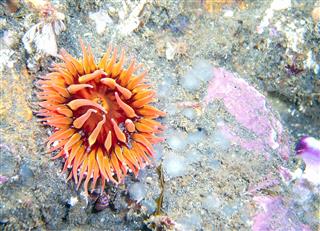 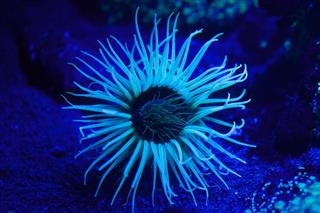 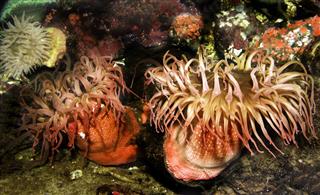 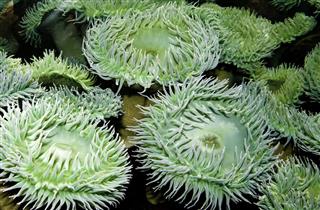 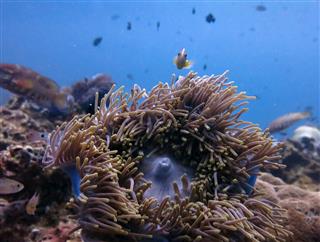