Demasoni cichlids are known for their beautiful blue color. They are commonly kept in aquariums as they are sturdy and easy to breed. If you're interested, then PetPonder has some tips on caring for this species. 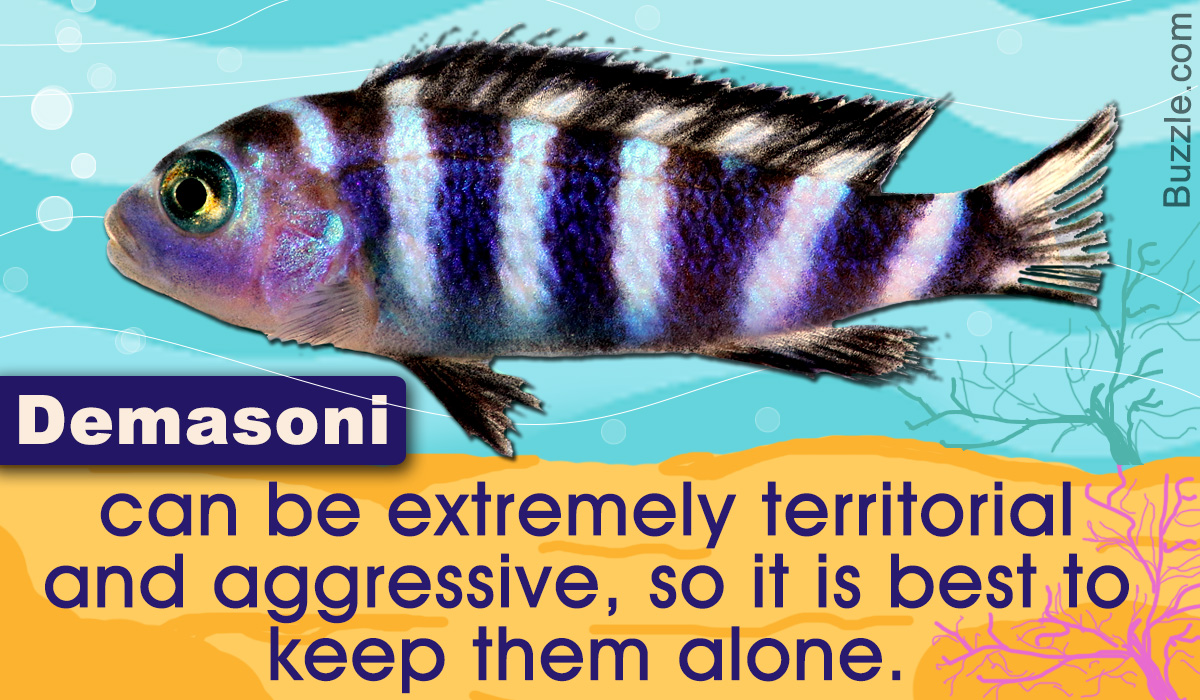 Demasoni cichlids are known for their beautiful blue color. They are commonly kept in aquariums as they are sturdy and easy to breed. If you’re interested, then PetPonder has some tips on caring for this species.

This fish is widely admired for its color, it is also known to be less tolerant towards other fish. Also, it is difficult to differentiate between males and females. So, if you plan to keep it an aquarium, too much aggression will lead to fights and may cause many deaths, which can be a total disaster for any novice aquarium-lover.

Demsoni cichlid (Pseudotropheus demasoni) is a species that is found only in Lake Malawi of Africa. These fish have unique alternating dark (almost black) and light blue (sometimes white) stripes on their bodies. Since there isn’t much difference between the males and the females, differentiation or gender identification becomes very difficult. The males are said to have a darker color and spots on their anal fin. These fish are smaller than their other brethren of the same genus. The males can grow up to 3 inches, while the females grow up to 2.5 inches. This is the reason they are sometimes called dwarfs. Remember, looks can be deceiving! Don’t ignore them size because of their size, they can be fairly aggressive.

Dutch biologist, Ad Konings first identified this species in 1994, and named this fish after his friend “Laif Demason. Since then, these beautiful fish have been kept in aquariums. But, before you get one home, get more information about them because they are not as easy to keep in aquariums with other fish, thanks to their territorial behavior!

❋ The water can be freshwater or brackish. They can tolerate almost 10% salinity. Also, a strong water movement and filtration is needed.

❋ The tank should have many rocks and plants to simulate their natural habitat in the wild. They also love chasing and hiding, so give them enough hiding places. Don’t forget to decorate sparsely because this can reduce their aggression. You can use live plants, but ensure that the plants are properly supported because the overexcited fish will try to uproot them and carry them around the aquarium.

❋ A substrate like sand or gravel mix can be used. Search for aragonite-based substrate because it helps maintain the high alkalinity and pH levels.

These are herbivores so they should be well fed with vegetable food and no worms. Any flake food, dried seaweed, and algae is fine. Spirulina flakes, flakes specifically made for cichlids, and cichlid sticks can also be given. You can feed them with frozen spinach or lettuce once in a while. The fry can be fed with newly hatched brine shrimp, crushed flakes, and daphnia. Also, the fry should be fed many times in a day. You can give them green algae, because they love to nibble at algae all day long. The adults should be fed less but divide the food into several meals in a day, instead of one large meal.

The mating starts when you see extensive chasing. The male is seen being too aggressive with other fish, but will attract his female by shaking his body and showing his belly. The male takes the female to a flat rock near its own territory and then the mating starts. A flat rock is needed as they will spawn near it. It is a maternal mouthbrooder species. So, the female takes the unfertilized eggs in her mouth and follows the male around the tank. The male releases the sperms which later fertilizes the eggs. The female then incubates them for three weeks. It is better to shift the holding female to a different, empty tank so that the fry remains safe. The broods can be anywhere between 6 – 20, as it all depends on the size and age of the female. The fry are released in the water and start feeding immediately.

❋ Malawi bloat is a very common disease in this species. This happens when the fish don’t get enough quality food. It is mainly because of excess protein food.

❋ They can be susceptible to other normal fish diseases which are caused due to poor quality of water and lack of fresh oxygen.

❋ Another common problem is ‘Ich’. It can be treated if detected at an early stage. White spots are seen on the body when you’re fish is infected. Increase the tank temperature to 86°F (30°C) for three days. If that doesn’t work, you’ll have to treat them with copper. Several medications are available, but ensure to follow correct feeding guidelines.

❋ A white marking around the lips is common observed in males. It is not a type of fungus, but it is mainly caused due to mouth locking. You can add 1 tbsp. sea salt per 10 gallons of water. Add it to the tank, it might improve their condition, though the white marks may not disappear completely.

❋ You need to do partial water changes after every 2 – 3 days, but a 50% water change could be done once a week.

❋ These fish are aggressive so consider the size of your tank and buy accordingly. Ideally, you should buy 1 – 2 males and more than 10 females. The reason being, only one female won’t be the target of aggressive males.

❋ If there are two males and one (alpha male) is continuously troubling the other. Just shift the less dominant one to another tank or it the situation may get too serious.

❋ If you want to keep this fish, it is best if you buy them in large groups of 12 or more, with only one or two males and all other females. It will save the females and other males as there will be too much of “crowd”. Buying them in small groups will eventually lead to the deaths of other fish, because the alpha male will slowly kill everyone.

❋ Regularly moving the rocks in the tank will help reduce the aggression, especially when you want to introduce a new fish.

❋ If you’re keeping any other species with them, it is important to ensure that they don’t have stripes or color like the demasoni. They will try to attack any fish that has a similar color and pattern. They should NEVER be kept with Dogtooth Cichlid or the Kenyi Cichlid.

❋ These can be kept with other Malawi cichlids like the Electric Yellow Cichlid, Red Zebra Cichlid, Cobalt Blue Mbuna, etc.

Just take care of these beautiful fish because in the wild, they are listed as “Vulnerable” by the IUCN. Hopefully, breeding them in captivity will help maintain their numbers.