Octopus Species That Can Be Kept as Pets

Octopuses are known to be exotic pets. Very rarely do people opt for these animals as pets, and not all octopus species can be tamed. Here we give you some species of octopus that can be brought home.

Octopuses are known to be exotic pets. Very rarely do people opt for these animals as pets, and not all octopus species can be tamed. Here we give you some species of octopus that can be brought home.

Did You Know?
The brain of an octopus is proportionally bigger than that of many large animals. Some of its neurons are in its eight arms.

Many of us do not prefer to have octopuses as pets. That’s because they are aggressive, some species are poisonous, and many of them are large in size. But there are some octopus species that are small, and can make good pets. They can be accommodated in a tank or aquarium, and aren’t very difficult to handle or care for.

Most octopuses are nocturnal and like to be in their dens during the day. They have an amazing ability to change their colors and shape. They prefer solitude and do not like companions in their tank. If given the right living conditions, they can be safely kept as pets. As already said, this does not apply to all octopus species, and there are only a few that you can bring home. Here we tell you about them.

Caribbean Dwarf Octopus
Its scientific name is Octopus mercatoris. It is a dwarf octopus native to the Caribbean Sea region of the Atlantic Ocean. If kept as a pet, it can be accommodated in a tank of around 30 gallons. In its natural habitat, it prefers to stay in a cave during the day. So, it’s a good idea to have a den for it, in the tank or aquarium in which it is kept. You can use a glass jar, rocks with cervices, or coconut shells for this. The ideal water temperature for this octopus is 74° to 76°F. Its lifespan is of about 8 to 10 months.

Caribbean Reef Octopus
Its scientific name is Octopus briareus. It has long arms and a large mantel. It can change colors according to its surroundings. It prefers warm waters, is nocturnal, and moderately active during the day. If kept as a pet, it needs a tank with a capacity of around 50-75 gallons. The water temperature should be around 78°F. It has a friendly nature.

Algae Octopus
That’s its common name, while its scientific name is Abdopus aculeatus. It needs a tank with a capacity of 50 gallons and a water temperature of about 78°F. It is social and active. It is small in size and quite active even during daytime.

California two-spot Octopus
Also known as the bimac, its scientific name is Octopus bimaculoides. Of all the octopus species, this one is the most popular as a pet. It requires a tank of a capacity of 50 gallons or more. The ideal water temperature is 59°F. Eyespots on each side of the head, are a striking feature of this octopus. Being friendly in nature, it makes a great pet.

Atlantic Pygmy Octopus
This octopus, scientific name Octopus joubini, is very small in size, making it easy to be accommodated in a small tank. Being small, it is also inexpensive. It can change colors, making it interesting to observe when kept in an aquarium. It needs privacy, but is known to be intelligent and playful. These traits make it a good pet.

East Pacific Red Octopus
Also known as the ruby octopus, its scientific name is Octopus rubescens. It is found in shallow waters. It is mostly red or brown in color. It is considered as an intelligent species. It was the first invertebrate to demonstrate individual personalities. It is small in size. It prefers cold waters (temperature of around 60 to 65°F) and can be accommodated in aquariums.

Common Octopus
Octopus vulgaris is its scientific name. The tropical waters are its natural habitat. It is among the most studied species of octopus. It can be kept in a tank of 50-gallon capacity or more. Any fish you put in its tank, will be eaten by it. Be careful when putting your hand into the tank. It may grab your hand assuming it to be food. Also, one should be watchful about its movements in the tank, as it is quick to escape.

The sad part about having an octopus as a pet is its short lifespan. Mostly, it lives for 8 to 10 months, with some species having a lifespan of 1 to 2 years. Nevertheless, the little time it is with you, can be the most fascinating. With its ability to change colors, its unusual shape, and its intelligence, it is sure to amuse you every time you see it.

Note: An octopus is an exotic pet. Before keeping one, check if it is legal to do so. Moreover, it should be understood that in keeping it as a pet, you deprive it of its natural habitat. On considering the legal and moral aspects, if you decide to keep one as your pet, ensure that the required safety measures are taken, and that it is taken good care of. 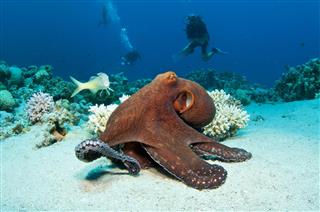 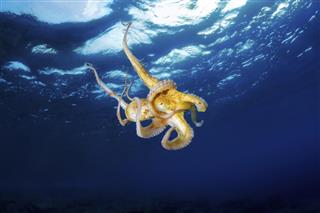 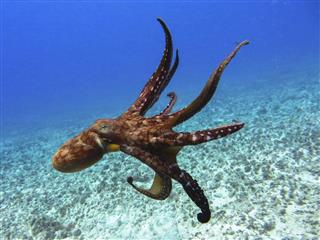