Behavior and Temperament of Dalmatians

This breed of dogs was made immensely popular by the success of the movie, 101 Dalmatians, and now they are regularly amongst the top 20 popular breeds over the world. This article will cover the basic areas of this breed, like history, physical features, temperament, personality, health, breeding, and what kind of family would be suitable to adopt a dalmatian as a pet.

This breed of dogs was made immensely popular by the success of the movie, 101 Dalmatians, and now they are regularly amongst the top 20 popular breeds over the world. This article will cover the basic areas of this breed, like history, physical features, temperament, personality, health, breeding, and what kind of family would be suitable to adopt a dalmatian as a pet. 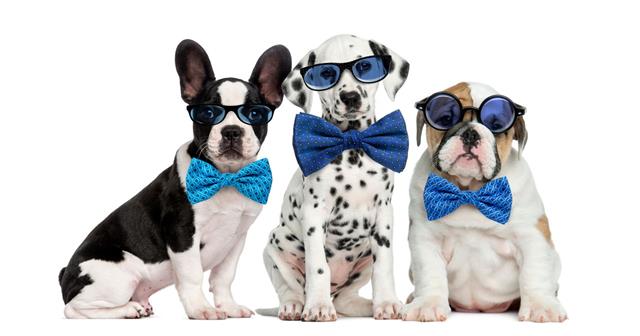 Dalmatians are also known as carriage dogs, because they used to trot alongside carriages in the past, presumably to keep the people in the carriage safe from harm. Then they were appointed as escort dogs and companion dogs as well. These dogs are excellent companions if they are trained properly, which is why they have been able to sustain their popularity. The following paragraphs deal with this breed in some detail.

Dalmatians are a medium-sized breed. They are characterized by irregular black or liver spots on their white coats. They fall under the category of ‘square outline’, meaning they are well built dogs, and quite muscular. The head of the dalmatian is broad and flat between the ears, and their eyes are spaced wide apart, and are round and bright, in a shade of brown or gray. They do not have standing ears unlike some other dog breeds. Instead, their ears fall around their face. They have a long neck and long legs, and their chest is deep. They have a level top line with a tapering tail. They have a short, white base coat, and a rhythmic gait, and walk with long, smooth strides. They have a lot of strength and stamina, and as such they do not tire easily.

Dalmatians are utility dogs. In the early days, they were used for pulling carts, hunting, circus performances, border patrols, retrieving, and were also adopted by fire departments (thus gaining another nickname – firehouse dogs) during the 1800s, since they got on well with horses and enjoyed running behind them. They are intelligent animals, and they are eager to please their masters and learn new things and tricks. They pick up new things pretty quickly and they are very determined dogs, which makes them a delight to train. They can be trained in various dog-agility exercises, as well as to participate in games like horse riding, jogging, fly ball, etc. They respond well to praise and rewards, and this is often used to help them learn difficult tasks, specially if they are unwilling or reluctant initially.

Their height and weight are as follows:

Dalmatians are dignified, loyal, playful and very active dogs. They are of even temperament if they are properly trained and socialized, at an early age. If they are not socialized at an early age, they tend to become aggressive towards others, and possessive of their families. Dalmatians form strong bonds with their families and if they are given up, they are known to cry and pine for their owners, and some starve themselves to death. Getting home a dalmatian is lots of commitment, so it is best to first analyze whether you are up for the job. It is just not done if you get him for a while, only to leave him back at the shelter when his upkeep becomes cumbersome! It’s inhumane. The right training and socializing will make them even and pleasant tempered, and also train them to get along well with other dog breeds. But they get along with horses the best, as this connection dates back several centuries, when dalmatians first ran along with horses and came to be fondly recognized as carriage dogs.

The way a dalmatian behaves depends largely on the social environment he is brought up in. If he is brought up in a loving and playful environment, he will become loyal and affectionate, but if he is brought up in an abusive environment, he will become aggressive and will develop a tendency to attack often if he feels that he is being threatened. Dalmatians are stubborn dogs, so they have to be taught to be obedient as soon as they are ready to learn, or the owner can expect a handful later on. Early training in obedience and leadership will make sure that your dalmatian listens to you, and is a good and docile (well, mostly!) companion. They are also prone to shyness, and if they are not socialized properly to help them overcome their shyness, it can hamper their lifestyle. They are outgoing and friendly dogs and are suitable companions for children.

The average life span of a dalmatian is between 14 – 16 years. This is quite long in terms of dog years, so before deciding to get a dalmatian as a pet, you should consider the commitment that is going to be required for the next 15 years of your life, and then decide whether you are up for it. After the movie 101 Dalmatians was released, this breed saw a surge in popularity, but since they were adopted or bought just because they were in fashion, many owners left them when they couldn’t cope with their maintenance. Thousands of orphaned dalmatians were euthanized around that time, when no one was ready to adopt the castaways. It was a terrible scenario.

Although they have a long life, there are certain health issues that this breed is prone to. They are susceptible to ear infections, kidney and liver problems. They should not be kept cooped up all day, and should be allowed to relieve themselves whenever they feel the need to do so. Inability to do so will exacerbate the kidney problems, and increase the risk of kidney stones. Another genetic condition that they are prone to, is deafness. Statistics reveal that almost 30% of all dalmatians suffer from deafness, and this usually presents itself in the first 4 – 6 weeks after the pup is born. They are also prone to hypo-pigmentation around the eyes and nose, and this condition worsens with age. Taking care of a dalmatian is not very difficult, but it’s not something that can be taken casually either.

Dalmatians have short, glossy and dense coats. They shed throughout the year. But since they have a short coat, their shedding can be managed so that it does not become a major issue. Daily brushing in the morning, will reduce the shedding inside the house throughout the day. They require a bath every 8 – 10 weeks, which is not very frequent. Unless instructed by the vet for some reason, avoid bathing your dalmatian frequently. At the most, once a month is fine, to prevent dog odor.

Dalmatians require a lot of exercise, since they are very playful and energetic dogs. You can either play catch with your dog, or take him jogging with you, or on a brisk walk. If that is not possible on a daily basis, then maybe you can design a pet friendly garden and allow your pet to remain free and play in the garden. If they are not given the basic exercise they require, they become bored which may spark moody and aggressive behavior in them. They require grooming, although not to a great extent. They need regular brushing to help reduce the shedding inside the house, a bath once a month or two months, regular vaccines and medicines for deworming, etc. If you stay in a flat, then getting a dalmatian may not really be suitable, because they require a lot of space to run around and burn off their excess energy. Besides which, if you are not in the physical condition to take him for walks or play with him, then it is a better idea to opt for a smaller breed.

As regards food, health and litter maintenance, it is necessary to keep a tab on his health by conducting regular visits to the vet. A dalmatian will produce a litter of 8 – 12 puppies at a time. Dalmatians are good eaters, not very fussy. But they do require a good breed of dog food to maintain good health and avoid any health issues. All the vaccinations and medicines should be given as and when prescribed by the vet, to avoid the spiral of a petty illness into a full blown disease. Over all, this is a pretty robust breed, so once all the vaccinations are taken care of, they should not develop any health issues. The only caution required is in the areas of urination and ear infection, which can be avoided by letting them free, and cleaning their ears frequently, respectively.

Suitability as a Pet

The following candidates are suitable as dalmatian owners:

Elderly people should avoid getting a dalmatian as a pet, because they will find it difficult to satisfy the playful side of the vivacious breed. Similarly, this breed can get carried away when excited, so although they are good companions for kids, it is best to keep them away from toddlers.

Dalmatians form great bonds with the families that adopt them, so they are good pets. But they do require enough time from their masters or they feel lonely. Keeping a dalmatian as a pet requires a great deal of time and patience, but I’ll say it is worth it. They are one of the best companions you can count on, at any time!