The Dinosaur of the Turtle World: Alligator Snapping Turtle Care

Alligator snapping turtles come across as cute and easy to care for when they are small, but a few years down the lane, and you have considerably large snappers in your aquarium. If you intend to keep one as a pet, here are a few things you need to take into consideration.

Alligator snapping turtles come across as cute and easy to care for when they are small, but a few years down the lane, and you have considerably large snappers in your aquarium. If you intend to keep one as a pet, here are a few things you need to take into consideration.

The alligator snapping turtle (Macrochelys temminckii), native to southeastern US, is the largest of freshwater turtles in the world. The species is not quite popular as a pet because of its large size and aggressive nature. In spite of this, people do keep these snappers as pets. You can too, but first make sure that you know what you are getting into.

The alligator snapping turtle is also known as the dinosaur of the turtle world due to its prehistoric look, with three pronounced ridges on its back. It attains a length of about 30 inches at full growth and weighs in the range of 200 to 300 lbs.

The species is not meant for inexperienced hobbyists. It requires expert handlers and a great deal of attention in terms of basic care. The problem though, is that people get fascinated by its exotic looks and buy it, without bothering to think whether they will be able to handle it.

In the wild, adult alligator snapping turtles inhabit rivers, canals, lakes, and swamps, while hatchlings and juveniles are usually found in small streams. In captivity, they need a lot of space. You can house a juvenile in a 10-gallon tank. However, large adults will require bigger enclosures. 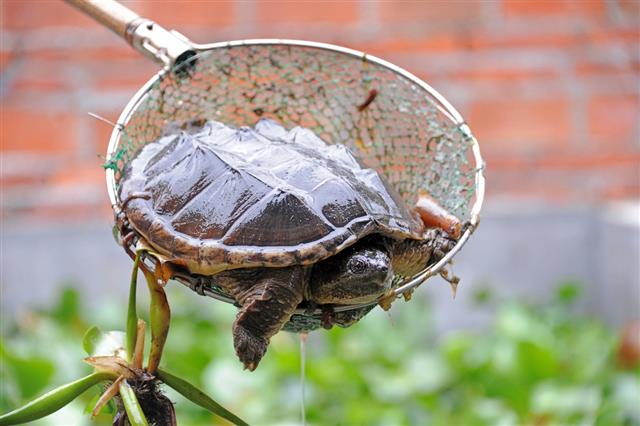 They require an aquatic setup as they love to float on the water surface. The ideal temperature of your turtle habitat would be in the range of 75ºF to 87ºF. You can either provide a heat lamp or place the enclosure in an area that receives sunlight.

The water level should be enough for the turtle to keep its nose out. These turtles are very messy, so you will have to change the water frequently. For them, anything in the tank is their food and thus decorative plants and toys should be avoided. Within a few years, you might have to consider getting your pet turtle a new home or placing it in a pond.

Like we said before, these turtles are known to eat anything that comes their way. It may seem unbelievable, but they have no qualms about eating their injured or sick tank companion either. In the wild, they eat frogs, clams, snakes, fish, and other turtles, as well as aquatic plants growing along the pond.

In captivity, you can feed them small fish, like guppies, minnows, and crayfish. They can also be fed mice, rats, and cooked chicken. (Note: Never attempt to hand feed this species; it can bite off your finger in one go.)

The alligator snapping turtle is very timid in water. Move it out of the water, and it will snap and bite at slightest provocation. The International Union for Conservation of Nature (IUCN) has enlisted this species as a ‘vulnerable species’, and therefore, you need to make sure that you buy a captive-bred specimen―and not one that’s caught in the wild.