Incredibly Useful Tips to Keep a Worm Snake as Your Pet

Caring for worm snakes can be difficult because of their specialized needs. But this is no reason to get disheartened, as PetPonder tells you how to take care of an eastern or western worm snake.

Caring for worm snakes can be difficult because of their specialized needs. But this is no reason to get disheartened, as PetPonder tells you how to take care of an eastern or western worm snake. 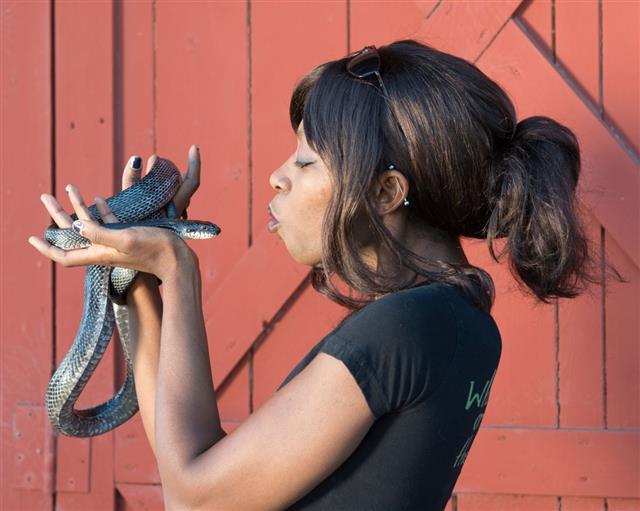 The appearance of worm snakes is earthworm-like, and, strangely, their diet also consists predominantly of earthworms.

Worm snakes are tiny snakes resembling earthworms, hence their name. They are only between 7 inches to a foot long, and have dark-brown backs with pink underbellies. These non-venomous snakes have tiny eyes, and their heads have the same width as the rest of the body, which gives them a worm-like appearance. The tail ends in a sharp spine, which is used for digging.

To clear the confusion, the term ‘worm snake’ is not one, but two species of snakes which are found only in the United States. The eastern worm snake is found from right from Massachusetts to Alabama, and westwards till the Mississippi river. On the other hand, the western worm snake ranges from Nebraska southwards to Texas, and eastwards till the Mississippi river. It has a much darker color than the eastern variety.

Both species of worm snakes show similar habits. They feed almost exclusively on earthworms and soft-bodied insects, which they find by burrowing deep within the soil. They also hide beneath leaf litter, fallen logs, and rocks. Because of their secretive nature, they are rarely spotted out in the open. Thanks to the fact that they do not bite, they are becoming popular among pet lovers.

❒ Since worm snakes spend most of their time buried in the soil, the terrarium should be filled with several inches of coco-husk, forest bedding, peat, or sphagnum moss.

❒ Add some hiding places, such as boxes or caves, throughout the terrarium.

❒ Provide a branch as a perch for basking.

❒ Since it is a small snake, some plants can be grown around the terrarium to create natural conditions.

❒ The enclosure should be supplied with a bowl of water (changed everyday) large enough for the snake to soak in. This helps in shedding.

❒ The worm snake can be fed earthworms, which can be bought from a bait store, or easily found outside too.

❒ Other food items include waxworms, butterworms, and silkworms.

❒ Spiders, snails, slugs, caterpillars, and soft-bodied larvae can also be provided. Crickets are generally not recommended. If given, their jumping legs should be removed.

❒ Provide each snake with several live worms once a week, occasionally supplemented with slugs or other insects.

❒ Worm snakes prefer a warm habitat. The temperature of the enclosure should be around 70 – 80ºF during the daytime, and not less than 67ºF at night.

❒ Only one side of the terrarium should be supplied with warmth, so that the snake has a choice between a warm and cooler region at all times.

❒ Lighting should be left on for 12 hours, and turned off for the remaining 12 hours (at night). This is because these snakes are active during early mornings and evenings.

❒ Since worm snakes lose a lot of water through their skin, the humidity of the terrarium should be maintained at around 60 – 70%.

Worm Snake On the Rocky Soil

❒ While worm snakes do not bite, they are shy animals and dislike being held.

❒ The snake may try to squeeze through gaps between fingers, when held.

❒ If distressed, it may press its sharp tail spine on the captor’s skin, though it cannot pierce it.

❒ This snake should be held gently, if at all, by supporting its whole body and avoiding rapid movements.

Worm Snake In the Hand

Whether eastern or western, a worm snake is not ideal as a pet for a beginner, due to several reasons. Since they remain hidden in the terrarium substrate, it’s hard to say if they are eating enough. Secondly, many snakes refuse to eat after a while, which can cause death within a week or two. So, if you find a worm snake out in the open, and are unsure of how to care for it, then it is best left to its own devices.