Scientifically known as Lampropeltis triangulum, the milk snake hails from the family of king snakes and it comprises 25 subspecies.

Scientifically known as Lampropeltis triangulum, the milk snake hails from the family of king snakes and it comprises 25 subspecies. 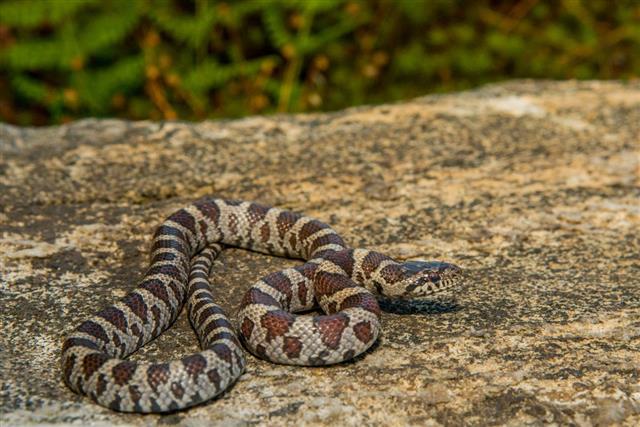 Did you know as to why the milk snake is called so? Because, the snake is known to suck cow’s udders to get milk! Cool, isn’t! A snake sucking cow’s udder. It may be a gross site to see, though! Can you believe it? Well, even I can’t and that is why I am just kidding with you all! Actually, this fact is a complete myth developed by people in ancient times. Snakes have better things to do than sucking cow’s milk. On a serious note, these reptiles do not possess the physical ability to do so. 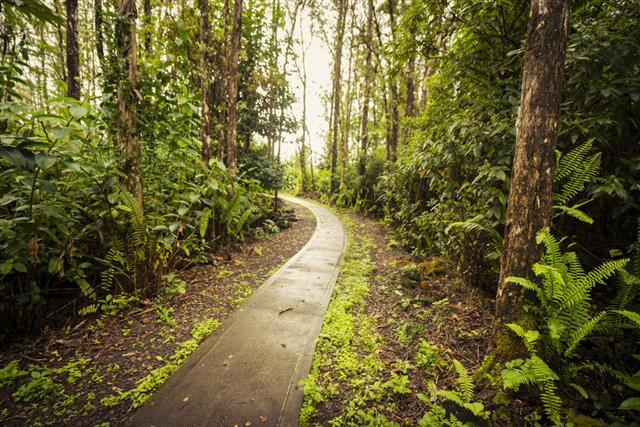 The habitat of the milk snake does not have a wide variation. Typically, it can be found in forested regions and in open parries. Rocky slopes are also populated by the snake. Talking about its distribution, its population is spread in areas such as southeastern Canada, continental regions of the United States, Central America and places such as western Ecuador and northern Venezuela. 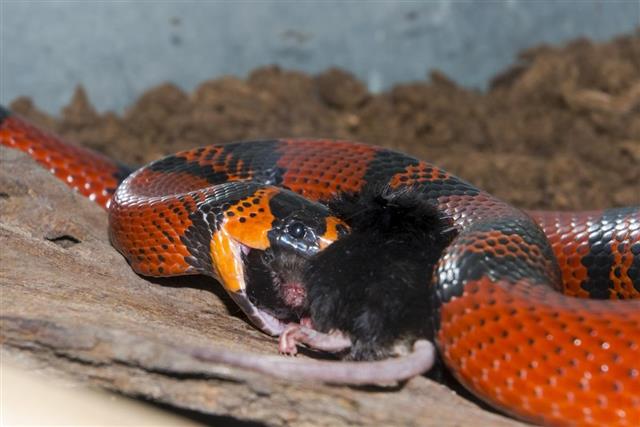 Alternating bands of orange-black-yellow or white-black-orange happens to the typical color pattern of this snake. But this is not the case with all the species. There are some, which instead of bearing bands, are marked with red blotches. 20 to 60 inches (51 to 150 cm) is the length which this snake can grow up to. 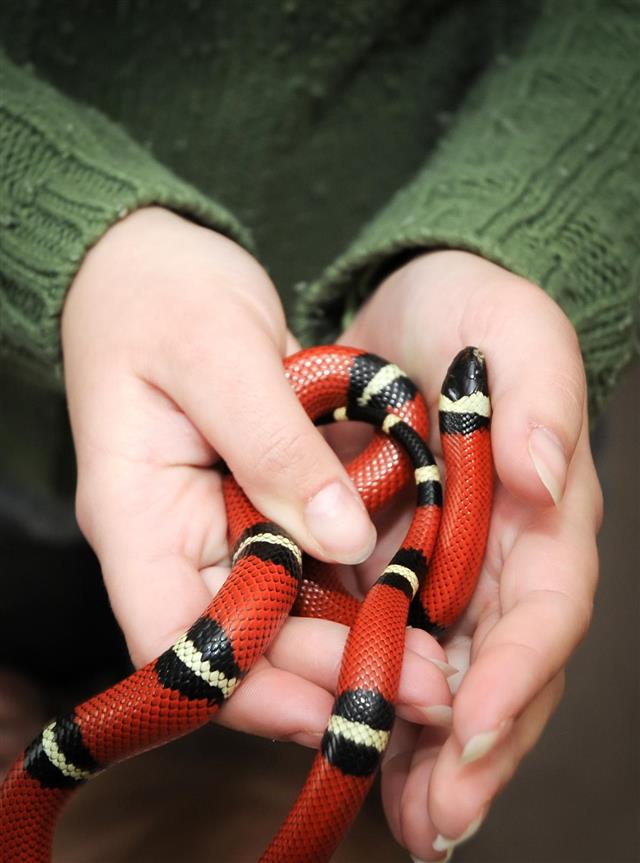 One interesting fact about the milk snake is, while it is a harmless reptile, it has an unmistakable resemblance with the coral snake; one of the most venomous snakes in the world. So in order to distinguish between these two similar looking snakes, people usually use mnemonics which include: 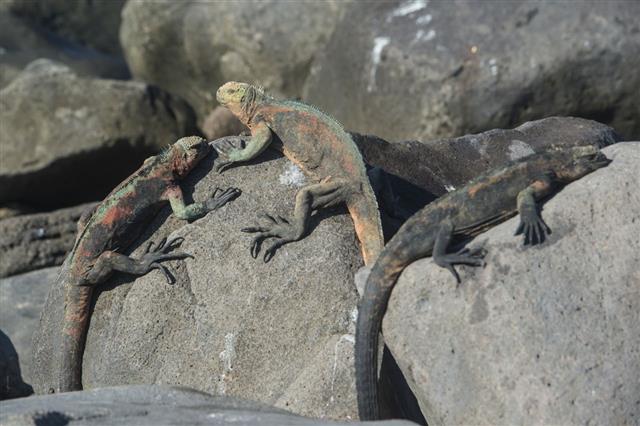 What do milk snakes eat? Small mammals, birds, frogs, fish and lizards mainly comprise the menu of this serpent. On certain occasions, this snake has also exhibited cannibalism. Juveniles prey on slugs, insects and earthworms. Although, the snake is known to be an opportunistic eater, its primary diet consists of rodents. And the thing about sucking cow’s udder, is a myth, to remind you again! 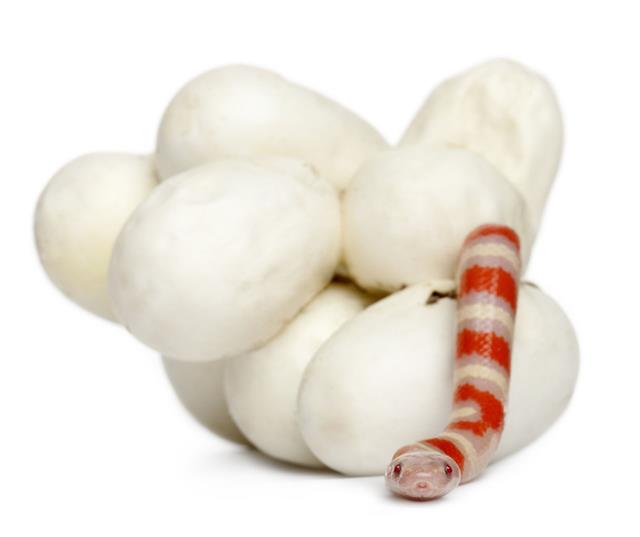 The period from early May to late June is known to be the ideal time for the milk snake to engage in mating activity. Then, in the months of June and July, the female lays eggs (about 3 to more than 20). The eggs stay hidden beneath logs, rocks, rotten vegetation, etc. Incubation period continues for about 2 months, before the eggs hatch in August and September. 12 years happen to be the life expectancy of the milk snake. About its behavior, the snake is nocturnal and mainly terrestrial.

According to the International Union for Conservation of Nature (IUCN), the milk snake does not face any major threat of being endangered or extinct. However, there are some places where the population is getting affected due to pet trading. 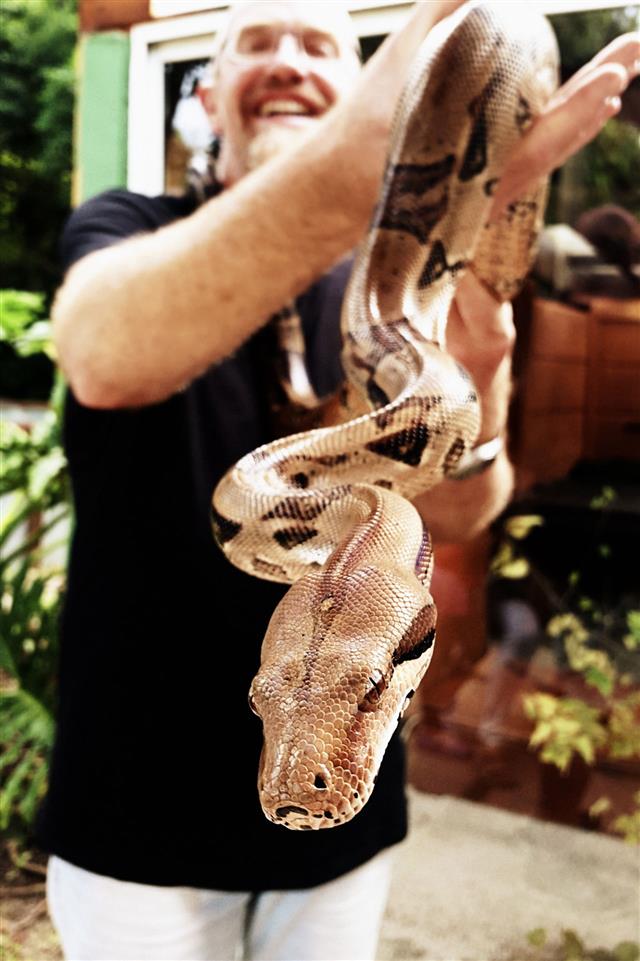 The prospect of milk snakes as pets can be quite rewarding for most people. Once you are aware of snake’s diet, habitat, behavior and the likes, the task becomes easier. Shredded newspaper, paper towels, dry leaves or dry mulch do well for setting up an ideal substrate for this crawler. Cleaning the tank regularly is also important. Provide the snake with lots of small and proper hiding places. Also, fill the tank with some branches, considering the preference of the snake to climb. Depending on the place which your milk snake hails from, you would have to set the right temperature in the tank. Ensure that there are no gaps, lest the snake might make an escape. 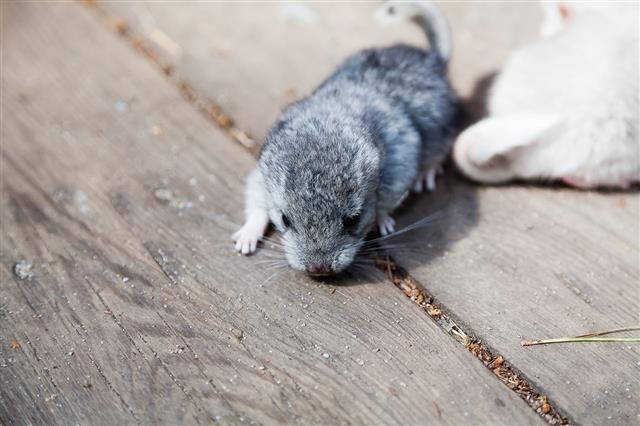 In captivity, the milk snake can do well with two good-sized mice every week, while if it is a juvenile, then pre-killed pinkie mice is enough, when fed every 4-5 days. What needs to be ensured is that the size of the food is not more than one and half times the width of the widest part of the snake’s body, as internal damage may occur. Also, it is advisable not to handle the snake for a few days after it has eaten. 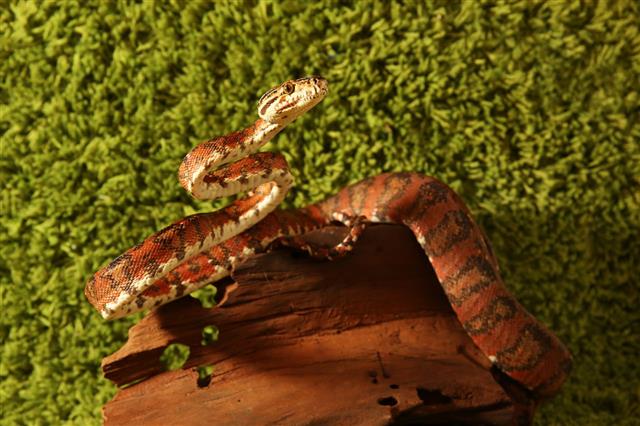 Being docile and easy-to-tame, the mild snake is considered a great choice for novices. Taking care of its diet food and environment, is all what is needed to keep this cold blooded serpent happy and in good health. 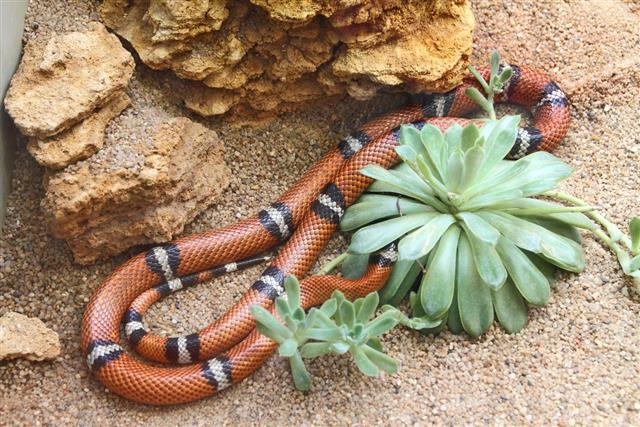