Wondering How to Save Your Dying Goldfish? We Come to Your Rescue

Goldfish are a type of freshwater fish. They are said to be one of the first fish breeds to be domesticated. They are very popular as pets. This article provides some information on saving a dying goldfish.

Home / Pet Types / Sea Creatures / Wondering How to Save Your Dying Goldfish? We Come to Your Rescue 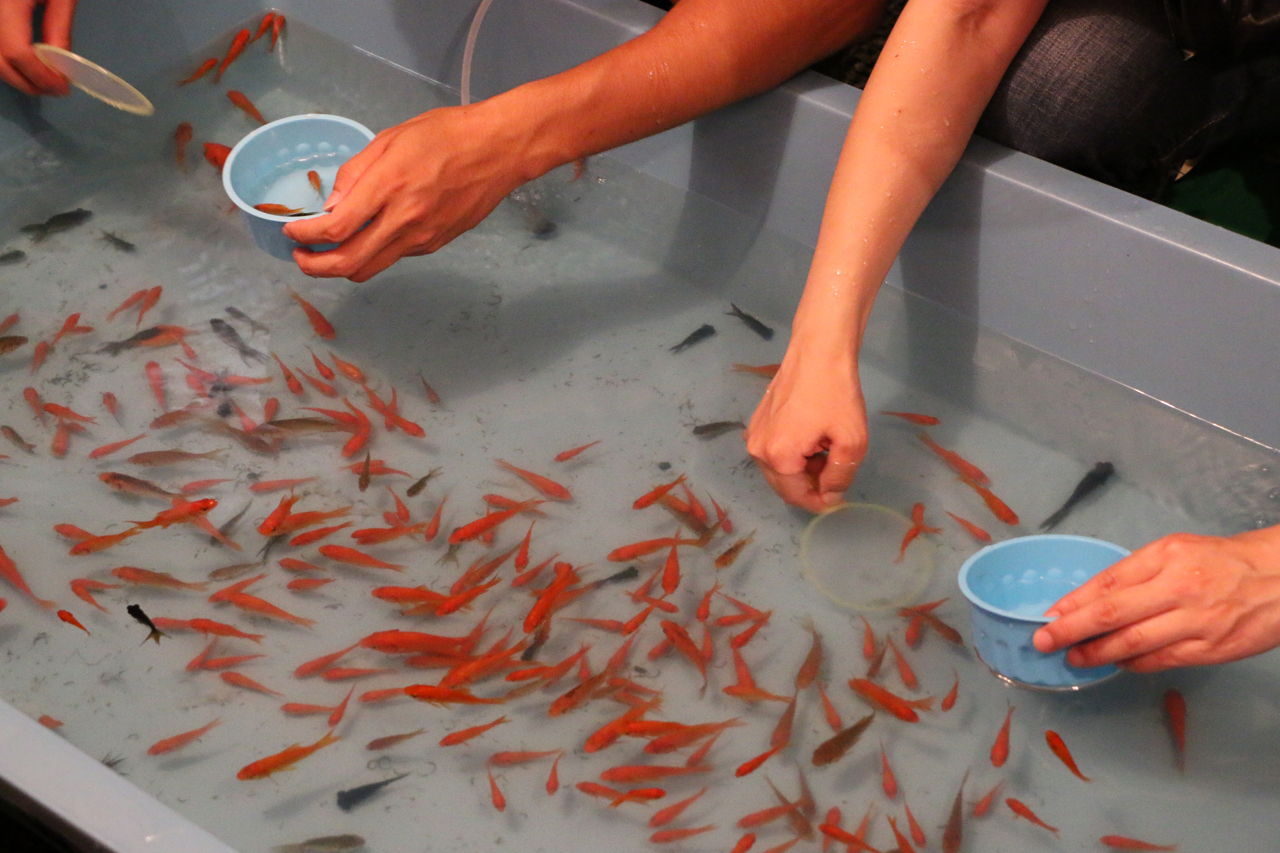 Goldfish are a type of freshwater fish. They are said to be one of the first fish breeds to be domesticated. They are very popular as pets. This article provides some information on saving a dying goldfish. 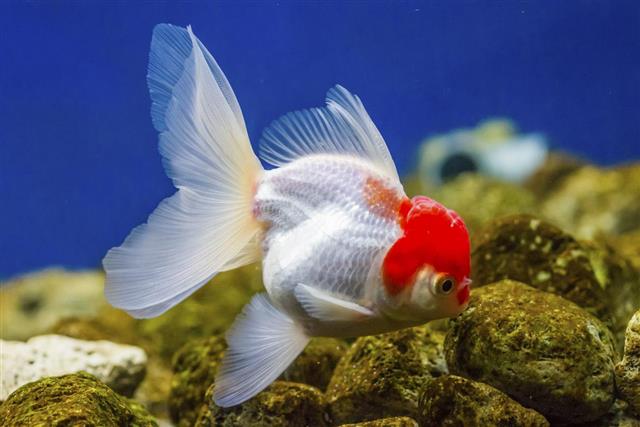 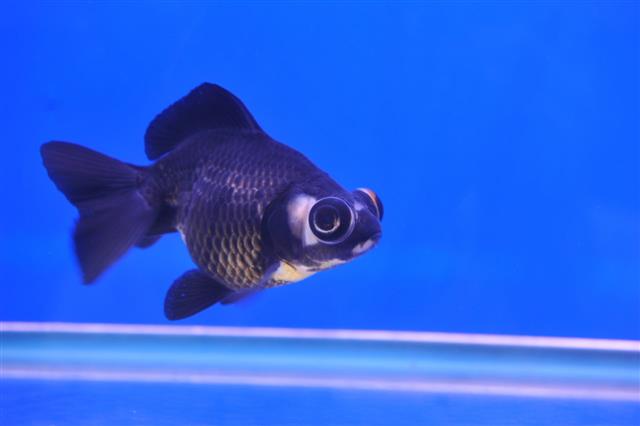 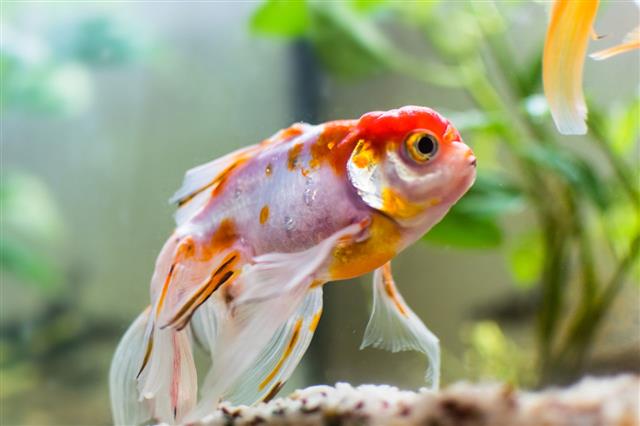 Fish make wonderful pets. Their appeal lies in the fact that they are relatively easy to care for. They are not temperamental like cats, nor do they make noise, like say, a cockatoo. For city dwellers who live in apartments, having fish as pets is the perfect option. If you do not have the space or the budget to go for a big aquarium, you can opt for a small tank and keep a pair of goldfish.

When it comes to tanks, never put your fish in a fishbowl. It is neither conducive to their growth, nor is it a good option. There is less space, no filtration, and no oxygen source in the fishbowl. The necessary tank capacity should be a 20 gallon tank for one goldfish. Similarly, you need to add 10 gallons of water for every fish that you add to the tank. Also, some fish need water that has a temperature between 60 to 72 °F. The tank should have a good filtration system to maintain good health and comfort level of your fish.

Like all other animals, fish also fall ill. These may be physical or psychological illnesses. However, early identification of these symptoms is always advisable.

Here is a list of signs and symptoms of a sick goldfish that you need to look out for.

At times, if you find your fish swimming at the bottom of the tank or hiding in the tank decorations, keep a close watch. There might be a chance that it is being bullied by the other fish in the tank.

Methods to Save the Fish

Given below are some methods that you can employ to save your dying goldfish.

One of the first line of action that you have to take is to separate the sick goldfish from the other fish in the aquarium or tank. This is because, some fish diseases are contagious. This is to avoid contamination of the water and the healthy fish from falling sick. Place the sick fish in a separate bowl which has been filled with filtered water or bottled mineral water. At times, if the water is cooler, it helps the fish to breathe better. It is advisable to not fill the bowl with tap water, as there may be contaminants in it which might be making your goldfish sick.

Once you have isolated the sick fish from the others, it is a good idea to change the water in the bowl a couple of times. At this point of time, it is advisable to not add any additives or salt to the water. Keep the fish under observation for a couple of hours. There is a chance that it will respond to this simple water change and will be up and swimming like a healthy fish.

If your goldfish is still lying at the bottom of the bowl after the water change, then you need to start with medications. However, first you need to look out for signs of diseases. For cloudy eyes, any slime on the body, tail and fin rot, bloody spots, and swim bladder disease, you can use a fungus eliminator. A fungus eliminator is an anti-protozoan or an antibacterial treatment, which can be purchased from any pet shop.

Sometimes, we end up overfeeding our fish. If a particular one overeats, it might end up suffering from swim bladder disorder. This disorder is caused due to increase in the nitrite levels in the fish due to overfeeding, which leads to constipation.

The other cause of this disorder is an intestinal parasite. If your fish has a distended belly, sinks to the bottom of the tank, or floats to the top upside-down, it might be suffering from this disorder. To treat it, thaw some frozen peas until they are properly softened. Add them to the tank. You may have to try this a few times by removing the peas and putting them back in the water, as your fish may take time to start eating.

Add Aquarium Salt to the Tank

Another possible line of treatment that you can try is adding aquarium salt to the water in the tank. Some diseases like clamped fins and spots on the body can be treated effectively by using aquarium salt. Do not make the mistake of adding table salt or sea salt to the tank. Aquarium salt is free of calcium silicate and iodine and it also maintains the pH level of water.

Separate the Goldfish from Tropical Fish

Another reason that your goldfish may be residing at the bottom of the fishbowl and not swimming around as it is supposed to, is because it is stressed out. If you are keeping tropical fish along with goldfish in the tank, then it might be a good idea to separate them. Tropical fish are fast-moving whereas goldfish are slow-moving. Their rapid movement might be disturbing the goldfish. Moreover, some tropical fish are quite aggressive and they might nip and injure the goldfish.

By keeping the water clean and using a water filter, you can prevent many goldfish diseases. If your fish does not respond to the treatment listed above, then you need to take it to an aquarium where it can be treated effectively. 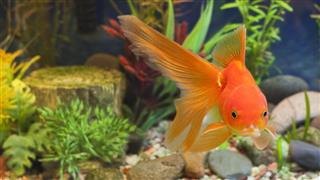 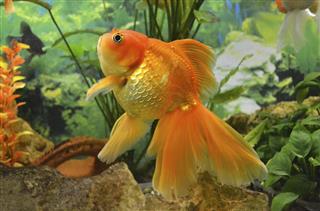 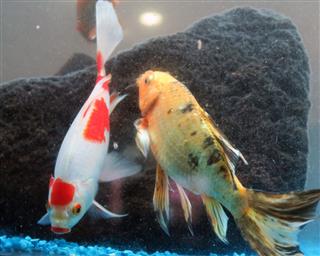 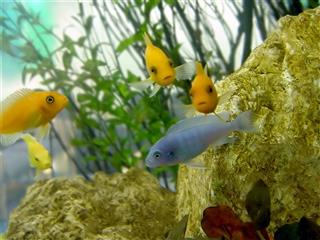 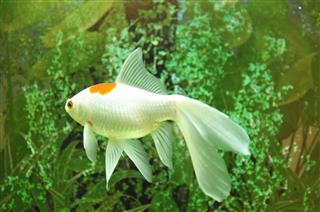 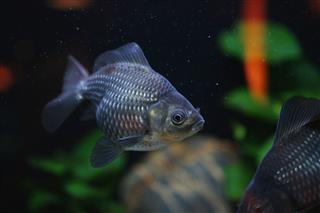 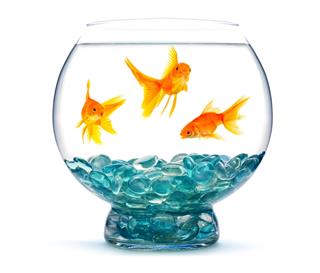 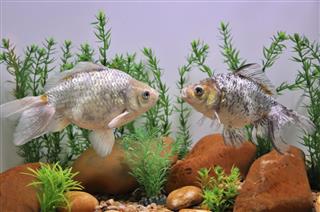 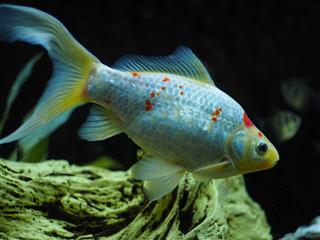 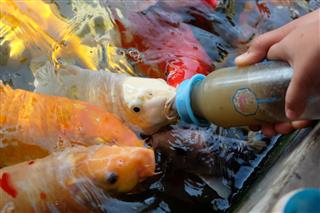