The Cottontail Rabbit is a very common rabbit species in North America and to a lesser extent, in South America. Learn some interesting trivia about this prominent species in the article. 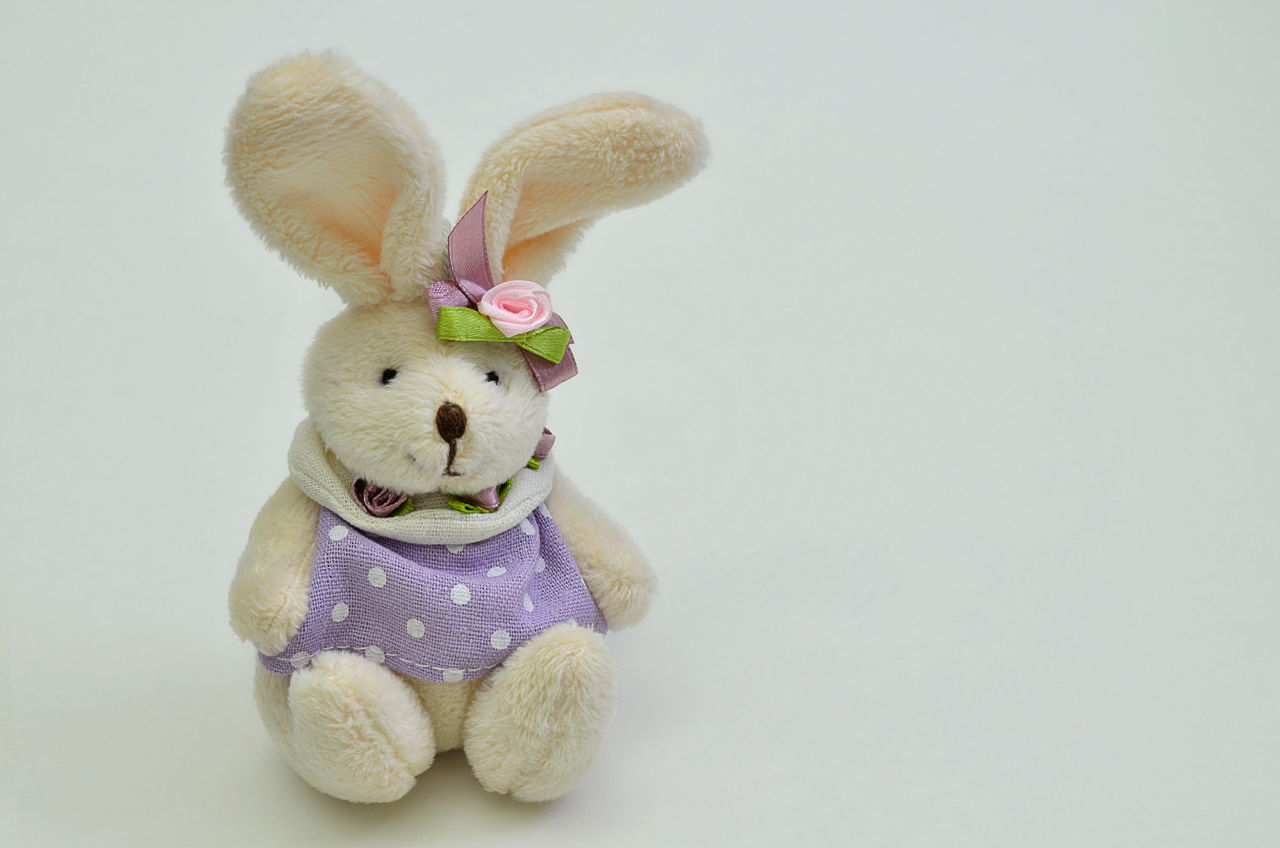 The Cottontail Rabbit is a very common rabbit species in North America and to a lesser extent, in South America. Learn some interesting trivia about this prominent species in the article.

Rabbits are fascinating members of the animal kingdom. Their cute and cuddly demeanor has given them a plush toy image and not too bright reputation but rabbits are actually quite smart and can run rings around both humans and their animal counterparts.

The most well-known and populous rabbit species in the U.S., is the Cottontail rabbit. In this article, read on to learn some information about cottontails and see if your impression of rabbits remains the same. 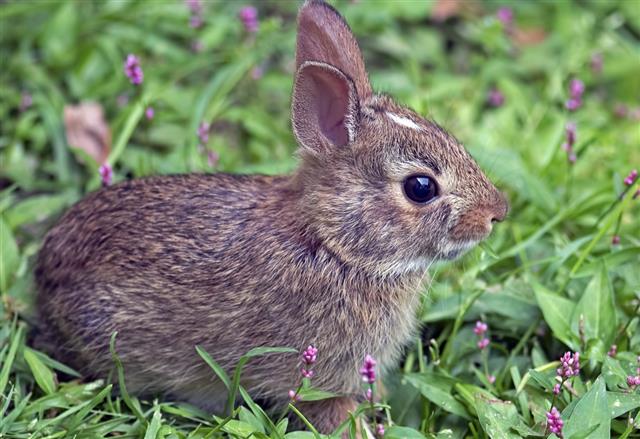 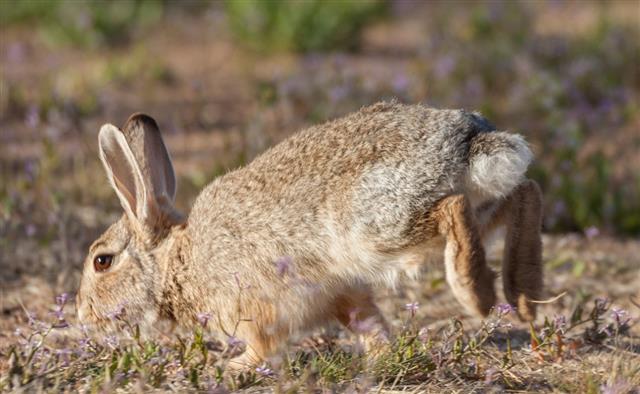 Color can vary depending on location. Reddish brown, light or sandy brown, gray, grayish brown are the common shades. Their underparts are completely white. Fur on the neck and legs is a tad darker and mostly reddish in tone, as compared to the color shade on other body parts. Ears are black tipped. 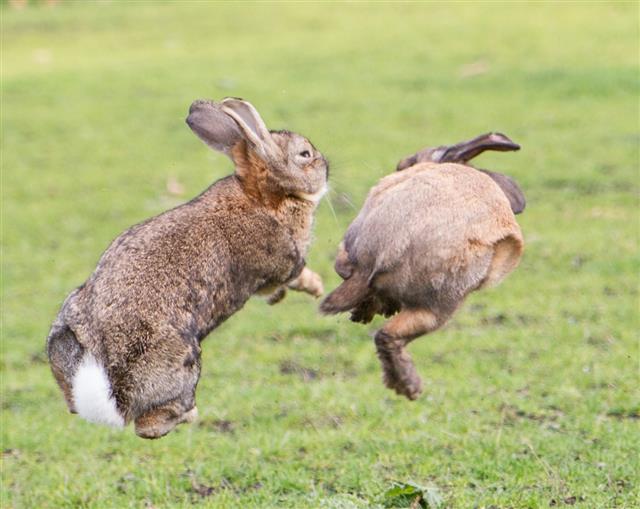 The females of the species on a whole, are larger than their male counterparts. The cottontail’s build is stocky, with powerful large hind legs and feet and a fleshy neck and chest area. 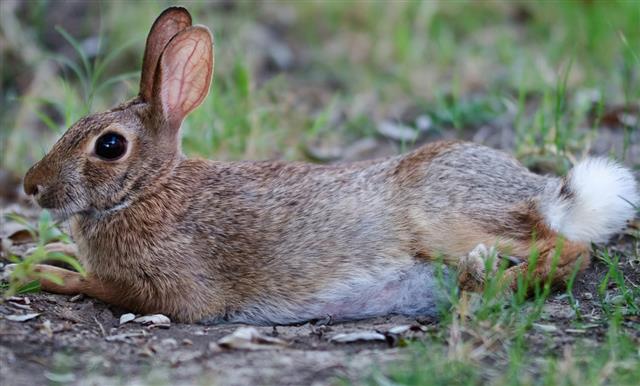 The most signature characteristic of this species is the cotton-like tail: a small, white powder-puff like tail, peeping cheekily out from the end of the rabbit. 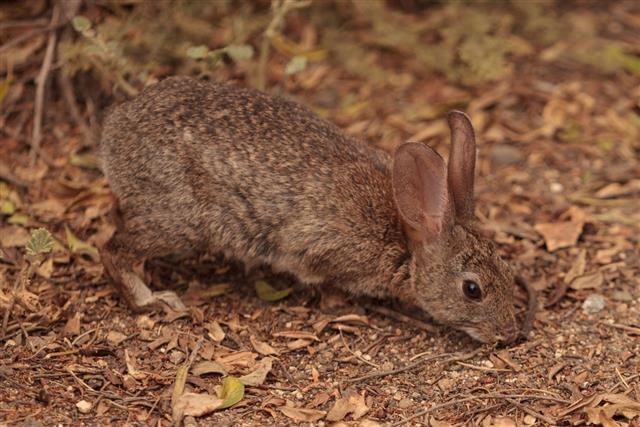 The exception to this rule is the Brush rabbit, who has a grayer tail shade. Some members of the Eastern cottontail sub-species have a white splotch or small patch on the forehead. 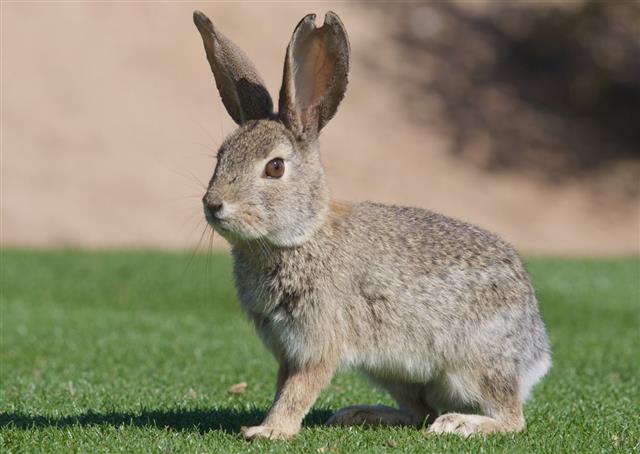 In America, 13 sub-species of the cottontail exist. Their occurrence is distributed across America, from the dry and desert regions of Arizona, Texas and New Mexico to the Hudson River area and New England.

As such, each species has a slightly different habitat and climatic conditions to adapt to. The marsh rabbit can swim well and is found only where water is present, like the marshes and swamps off the coasts in the Eastern and Southern regions of America. 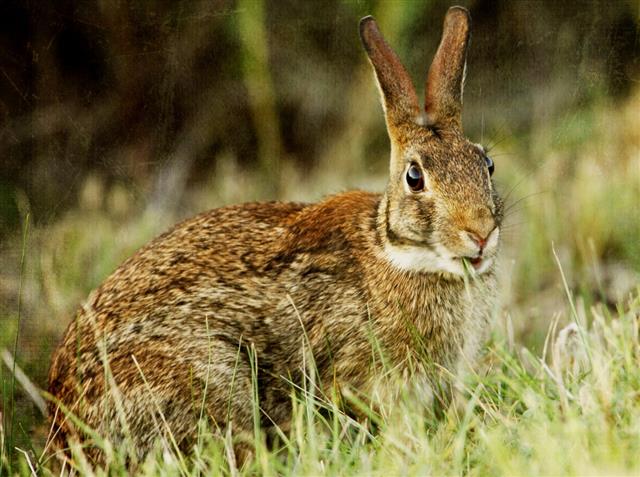 Its close cousin, the swamp rabbit, is also waterproof but its habitat is restricted to Southern parts of the U.S. 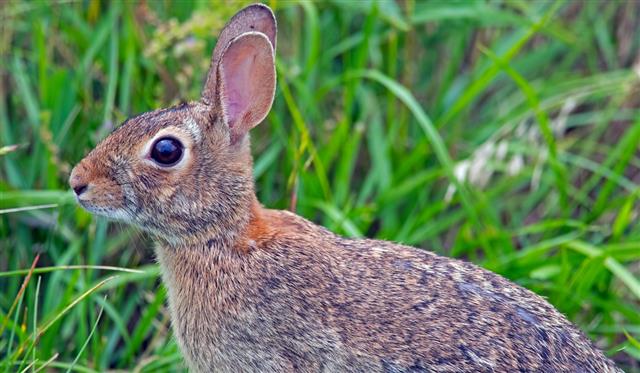 The Eastern cottontail thrives in meadows and grassy areas with small shrubs and bushes to hide in.

Their natural toughness and hardy nature, as well as abundant population has made the cottontail species, very adaptive in style. Whether a purely wild or human populated area, the cottontail knows how to live. They prefer areas with at least some shrubbery or undergrowth to hide under. In desert or open areas, they opt for higher altitudes.

All cottontails are twilight, dusk or early night animals. Some are active during the afternoon and peak sunrise time, when the sun is low but all tend to avoid the morning and middle of the day. Collecting food and eating it, as well as digging burrows – all such activities are reserved for the darker, low light parts of the day, so that the risk of predators is reduced. During the day, they hide in undergrowth or bushes and try their best to keep a very low profile. 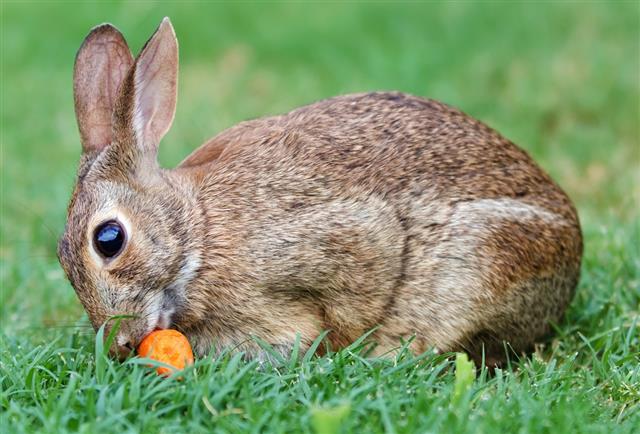 They are herbivores, so grasses, herbs, tubers, roots and shoots or leafy veggies make up their diet. Cottontails are also fond of human garden produce like growing peas, lettuce and carrots (of course!). 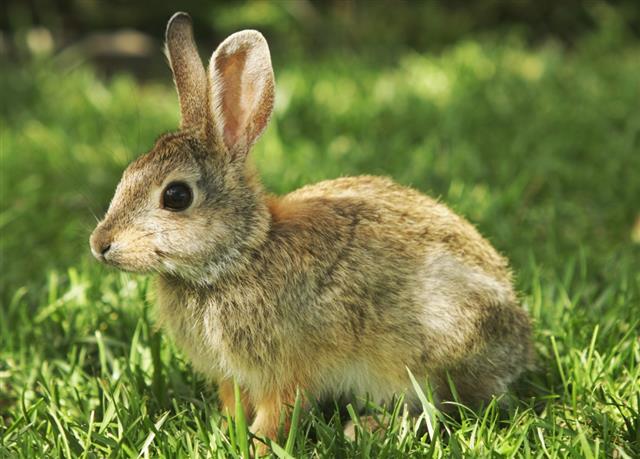 Cottontail rabbits are speedy little buggers. They can reach speeds of 18 miles per hour, when chased by a predator but such speeds are tiring and they leap or take short hops and jumps to help conserve their strength. While running, they move in a zig-zag fashion, dashing here and there, so that the animal chasing them can get dizzy from moving and watching such rapid movement at the same time. 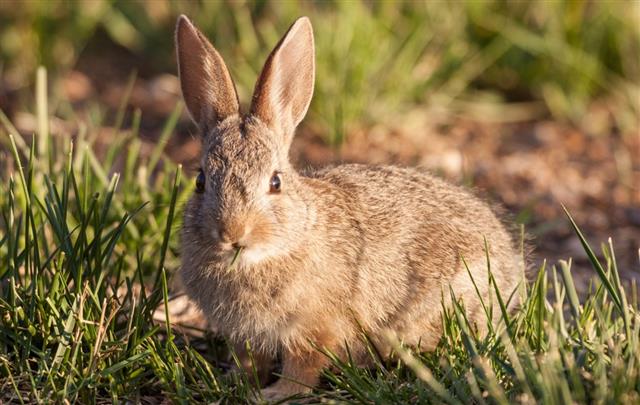 Another trick up their sleeves, is to “freeze” or be perfectly still for some time. The idea here is that they will not be noticed, if they are perfectly still and low to the ground. Common predators of cottontails are foxes, coyotes, owls, hawks, snakes, mink, weasels and skunks.

Cottontails have very powerful and large feet. They use them to dig burrows in the semi-soft soil near bushes and shrubs, they dig up roots and shoots of plants to eat and they communicate with each other by stomping their hind feet. When fighting with small predators or with competition during the mating season, cottontails push off or hit with their hind feet to deliver a mighty kick.

The complete breeding season starts in the months of February to March and goes on till early fall. The courtship rituals of these little fellows is quite amusing. They are early sexual maturers, generally young rabbits can mate at 2-3 months of age. They mark a designated area or ground of their own in the mating season and will fight with other rabbits from their warren, both males and females to defend their territory. A male will indulge in a lovely hop-skip-jump and fight dance with a female and once done, will quickly move on to other females.

Cottontails as a species, can be very destructive not just to gardens. They gnaw and chew off branches, twigs and small shrubs. They can scratch or pull the bark off trees and bushes. Hence, they can ruin garden landscapes, parks, orchids and plantations. They are also fond of young trees, with soft bark and can end up destroying an entire newly grown crop. Their prolific breeding habits and easy adaptability to different living conditions makes them a rather ravaging little pest.

If you manage to catch a glimpse of this grass and shrub dweller, keep still and do not approach it, so you can observe it better. Rabbits are very timid creatures and will flee at the sight of anything unknown. And note the white puffy tail, when it flees!