A tarantula's first reflex to a perceived threat is to run away, and second is to spray the threatening object/ creature with hair from its abdomen! Most live in burrows in the ground, and are nocturnal. Here are some more surprising and fascinating facts about tarantulas... 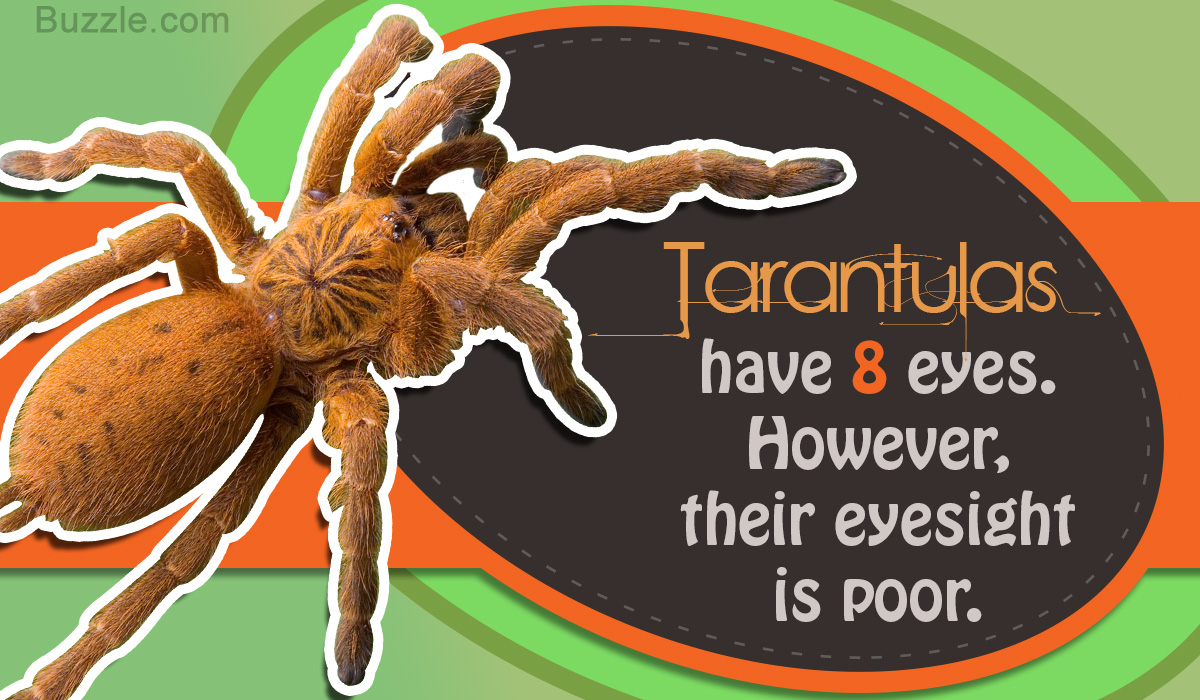 A tarantula’s first reflex to a perceived threat is to run away, and second is to spray the threatening object/ creature with hair from its abdomen! Most live in burrows in the ground, and are nocturnal. Here are some more surprising and fascinating facts about tarantulas… 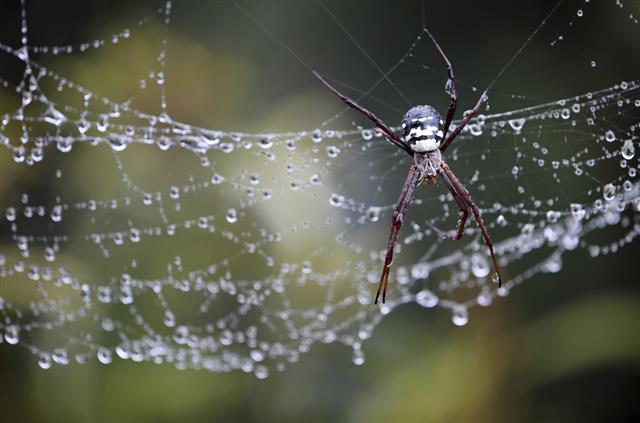 Tarantulas are scared of humans, and will never attack or bite them unless provoked. Occurrences of unprovoked attacks are rare.

The word tarantula brings to mind a big, hairy, scary spider. Thanks to the movies which have used giant mutated spiders with exaggerated prowess to strike fear in our hearts, most people have a distorted view of spiders (especially the large hairy ones). However, there is no better time to clear away misconceptions than right now.

Tarantula does not refer to any one kind of spider, but is the name given to several hundreds of species. They are found in most of the tropical, subtropical, and arid regions of the world, such as forests and deserts. Their color and behavior varies according to the environment of the region they inhabit. Tarantulas being the most feared spiders, this article will give you some astonishing facts about these fascinating creatures and bust some myths as well.

The name ‘tarantula’ is borrowed from the town of Taranto in Southern Italy. These spiders have many different regional names, including “baboon spiders” in Africa, and “bird-eating spiders” or “earth tigers” in Asia. Some species native to Australia are referred to as “whistling spiders”, “barking spiders” or “bird-eating spiders”.
The name tarantula is given to a group of large spiders with hairy bodies and legs. There are approximately 900 species of spiders that fall into this category. The largest tarantula is the Goliath bird-eating species, while the smallest, acanthopelma annae, is the size of a fingernail.
Unlike other spiders, tarantulas do not use their webs to catch prey. Actually, tarantulas do not really make webs. They mainly use the silk that they make to line the walls of their burrows to prevent them from collapsing, lining the floor of the burrow to prevent ant infestation, and to build hammocks in which they can rest as well as lay eggs! Sometimes they also make small tunnel like structures to live in, when they are dwelling in trees.
While a fearsome reputation precedes them, in reality, it is only the tarantulas bite that is painful, but the venom they inject is weaker than a typical bee’s. Even the largest (Goliath) tarantula’s bite, is usually not lethal to humans, but can make a person sweat profusely and feel nauseous. The venom of some can cause discomfort for a few days, but it is only fatal for those allergic to it.
They move slowly and deliberately, which is often perceived as stealth. Nocturnal hunting is an area of expertise, though it does not spin a web as a trap for its prey, or leap upon it. Some of them put in place a trip wire which alerts it when something approaches its burrow. The spiders then grab the prey with its appendages, and inject paralyzing venom into them. They then inject digestive juices into their victims, which break down soft tissue liquefying their victims’ insides, so that they can then be sucked up through their straw-like mouth.
Some species hunt prey primarily in trees, while others hunt on or near the ground. Like most spiders, tarantulas mostly feed on insects, though they occasionally feed on small animals such as frogs, toads, small snakes, lizards, mice and bats. The Goliath bird-eating tarantula, as the name suggests, eats small, young birds, but only rarely. If a tarantula has a particularly large meal, it can go without food for nearly a month.
Like many other insects, they also shed their external skeletons after a given period of time. The process is called molting, and in the case of tarantulas, it may include the replacement of internal organs, such as female genitalia and stomach lining. They are even known to regrow lost appendages.
Another ingenious weapon (apart from the nasty fangs) that the tarantula has is that it can release hairlike setae (looks like strands of hair) from its body, when it perceives a threat. When this tiny, almost invisible hair comes in contact with the objectionable person or animal, it irritates the skin. The situation can turn fairly grave if the delicate mucous membranes around eyes or mouth are exposed to this released hair.
Information about Goliath tarantulas throws up intriguing facts, such as that they make a sound, without the use of vocal cords! This fairly distinct hissing sound (called stridulation) that can be heard up to 15 feet away is generated by the rubbing of bristles on its legs together!
While tarantulas do not have many natural enemies, parasitic pepsis wasps presents quite a threat. This wasp first paralyzes a tarantula with its sting, and then lays its eggs on it. When the eggs hatch, the wasp larvae feed on the living tarantula to grow and sustain themselves.
The average lifespan of a male tarantula is 14 years. Females are usually known to live twice as long as the males, making their average lifespan around 28 years. However in the wild, some males have also be known to live for 30 years!
After mating, the female tarantula stores the remaining sperm in tiny organs called spermathecae. These tiny organs are shed during molting, and can sometimes help identify the sex of the tarantula. At a time, the female lays around 500 – 1000 eggs, which are all placed in an egg sac. The female guards this egg sack till all the eggs hatch, by keeping it between her legs.
Tarantulas are very territorial in nature and guard their territory fiercely! If another tarantula encroaches on their territory, one of them will usually end up as food for the other, since they are cannibalistic in nature. Friendship between two tarantulas kept together is a rare and exceptional thing!
Tarantulas are considered a delicacy in Cambodia, and also by some tribes (especially the Piaroa tribe) in Venezuela. They are fried with spices and herbs and relished as a crunchy bite in Cambodia, and roasted on branches and eaten with salt and pepper in Venezuela during times of food shortage!

Some species, especially the vividly colored ones, are popular in the exotic pet trade. Their popularity as pets is on the rise, and they are easily available. However, one must know how to properly handle a pet tarantula, and be well versed with the care guide before bringing one home. A disturbing development is that the tarantula populations are under pressure due to habitat destruction. 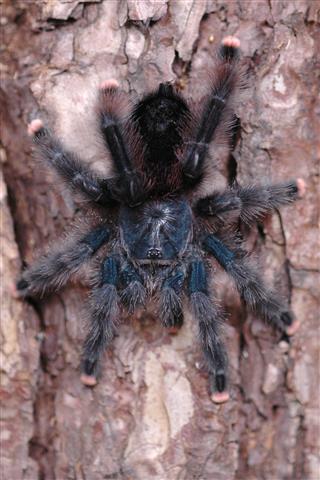 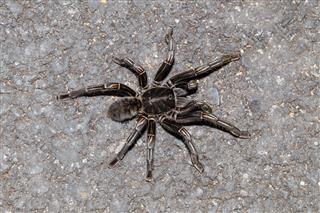 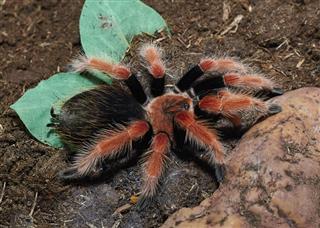 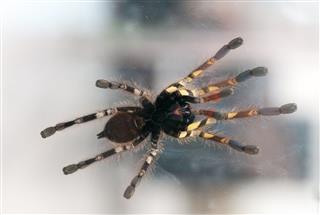 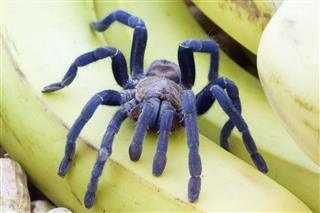 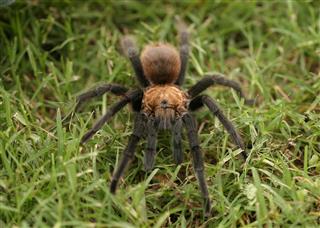