Mexican walking fish or axolotl, as it is also called, is one of the most strange-looking creatures in the world. However, this little water monster is quite popular as a pet. This article will give you in-depth information about this strange yet fascinating animal. 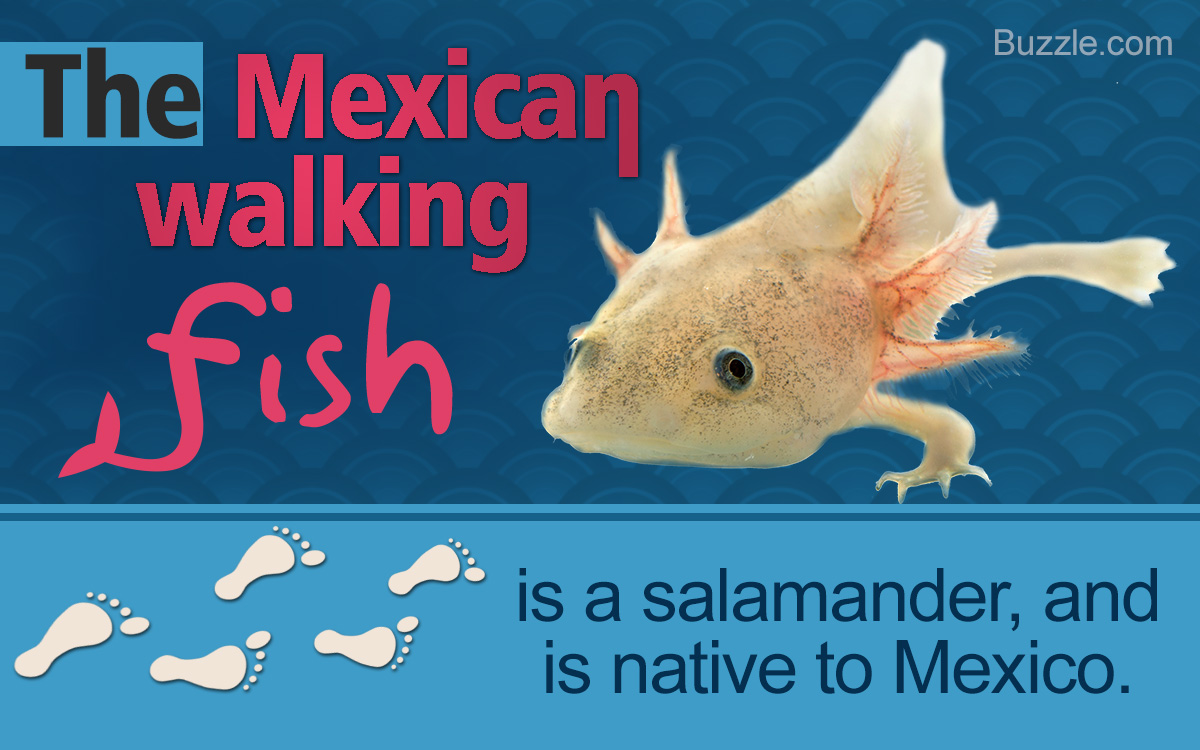 Mexican walking fish or axolotl, as it is also called, is one of the most strange-looking creatures in the world. However, this little water monster is quite popular as a pet. This article will give you in-depth information about this strange yet fascinating animal.

The word axolotl comes from the Aztec language of Nahuatl. According to Aztec mythology, the Aztec God Xolotl is believed to have transformed into an axolotl.

Axolotl (scientific name Ambystoma mexicanum) is native to Mexico and is often referred to as the Mexican walking fish. However, this little aquatic animal is not a fish in the true sense. It is an amphibian in a paused state of metamorphism. It belongs to the Tiger salamander complex and is the larval stage of the salamander. This metamorphic failure is caused because of the lack of thyroid stimulating hormone which induces the thyroid to produce thyroxine.

An adult Mexican walking fish ranges in length from 15 to 30 centimeters. Its average length is close to 23 centimeters. Being a salamander larva, axolotl has characteristics like external gills and a caudal fin that extends from behind the head to the vent. Mexican walking fish have wide heads and underdeveloped limbs that possess thin, long digits. They have short legs with four digits in front and five on the hind feet. The most bizarre feature of the axolotl is the retention of its branch-like gills, which project outwards from the neck, on each side of the head. Each side is split into three branches, which is covered with feathery pink filaments. Mexican walking fish have pedicellate teeth. They have a three-chambered amphibian heart. They are found in gray, brown, golden albino, white albino and black colors.

Axolotl is mainly found in the Mexican lakes of Chalco and Xochimilco, in Mexico. Unfortunately, the Chalco lake was drained to avoid flooding and it no longer exists. Also, Lake Xochimilco has diminished and exists only in the form of canals. The axolotl population has decreased due to contamination of the lake waters. Like most other neotenic species, Mexican walking fish prefer a high-altitude water body, that is surrounded by a terrestrial environment. They are found in regions of deep brackish waters and plenty of vegetation.

Axolotls are carnivorous and feed on small creatures like insects, worms and even small fish. If you have them as pets, you can feed them blood worms, wax worms, earthworms, mollusks, insect larvae, crustaceans, trout and salmon pellets. They should not be kept with other fish in the tank, as there is a risk of axolotls eating the smaller fish.

Axolotls belong to the family of ‘mole salamanders’. They exhibit neoteny, which means they attain sexual maturity without going through the process of metamorphosis. Mexican walking fish mature sexually at the age of 12 months. Males can be identified by their longer tails and swollen cloacae lined with papillae, while females have wider bodies. Females lay 300 to 1000 eggs. Larvae hatch within a period of two to three weeks, and can be fed with daphnia or worms.

This little creature with a half salamander and half fish-like body is on the verge of extinction. According to CITES, it is enlisted as an endangered species. It is also enlisted by IUCN as critically endangered in the wild. Water pollution and habitat destruction are the two main reasons behind reduction in their number. Another reason is that they are defenseless and are easy preys for non-native species. After the introduction of larger fish and predatory birds like heron into their habitat, their population has decreased significantly. Scientists estimate that the number of axolotls, which used to be around 1,500 per square mile in certain areas, has reduced to just 25. This is the number of wild axolotls. However, the number of these animals in captivity is large.

Mexican walking fish are used for aquarium trade. They are a part of Mexican cuisine. Roasted axolotl is a widely popular Mexican delicacy. These factors further reduce their population.

An axolotl retains its larval tail along with the four limbs which help it for easy locomotion. It has regenerative characteristics which allow it to regrow parts of its body. If it loses a limb, for instance, a small bud grows in its place and slowly transforms into a new limb. They do not develop vestigial lungs. They have to rise to the surface of the water for filling their lungs with air before descending to the bottom. A mutation in the pigment gene has resulted in various colors and patterns in axolotls. Their breeding depends on the temperature of water and length of the day. Spring is their breeding season as the water is warmer and the days are longer during this period. Due to neoteny, axolotls cannot live on land. Thus, they cannot colonize new habitats. However, there are cases where they have undergone further metamorphosis and developed stronger lungs to live on land.

Role as a Model Organism

Axolotls have been widely used in research as they have the ability to regenerate limbs. Their characteristic of neoteny has also encouraged research in that field. They are treated as model organisms and used for researching various biological phenomena. Hence, a large number of axolotls are bred in captivity. Their embryos can be easily manipulated and the complete development of their vertebrae is visible. They are also used for the study of heart defects in embryos. They have a mutant gene that causes heart failure in embryos. However, the embryos can survive till the hatching phase without any function of the heart. Apart from having a unique quality of regenerating their limbs and appendages, they can even accept transplant organs like parts of the brain, eyes, etc., from other axolotls.

▶ Axolotls do not have eyelids.

▶ The approximate average weight of axolotls is between 2.11 and 8 oz.

▶ If proper care is taken, they can live for up to 15 years in captivity.

▶ They find food by smelling and suck it into their stomachs by applying a vacuum force.

▶ For the first few weeks of their life, they have a transparent body.

▶ As a sign of sexual maturity, albino, golden and white axolotls may have darker tips on their toes.

Axolotls are tough creatures and do not fall sick easily. It may not be safe to keep axolotls with other fish in a single tank. One reason is that they prey on small fish. The second reason is that the small fish may nibble at the axolotl’s gills. Axolotls, especially the juvenile ones are prone to cannibalism. Hence, it is advisable to keep only one axolotl in a single tank. You may utilize tank dividers for accommodating two or more axolotls in the same tank. The tank should have a depth of at least 25 to 30 cm and a temperature of 10 to 20 degrees Celsius. It is advisable to change the water daily, clean the tank regularly and maintain a pH level of 7. Feed it adequate quantity of food every 2 to 3 days as it takes that much time for digestion. Axolotls are said to be active in dim light and it is advisable to feed them in the night light. When in captivity, axolotls can eat gravel from the tank causing their death. Hence, gravel which is larger than the size of their heads can be placed in their tank. Holtfreter’s solution can be added to the tank water to avoid infections.

After reading this article, you might want to have these miniature water monsters in your aquarium. Check with a local pet store to find Mexican walking fish for sale; go ahead and bring one home!