Mind-blowing and Interesting Facts About the Flashlight Fish

One of the more unique creatures found under the sea, the flashlight fish are a really marvelous sight to watch. PetPonder provides some interesting facts about these fish. 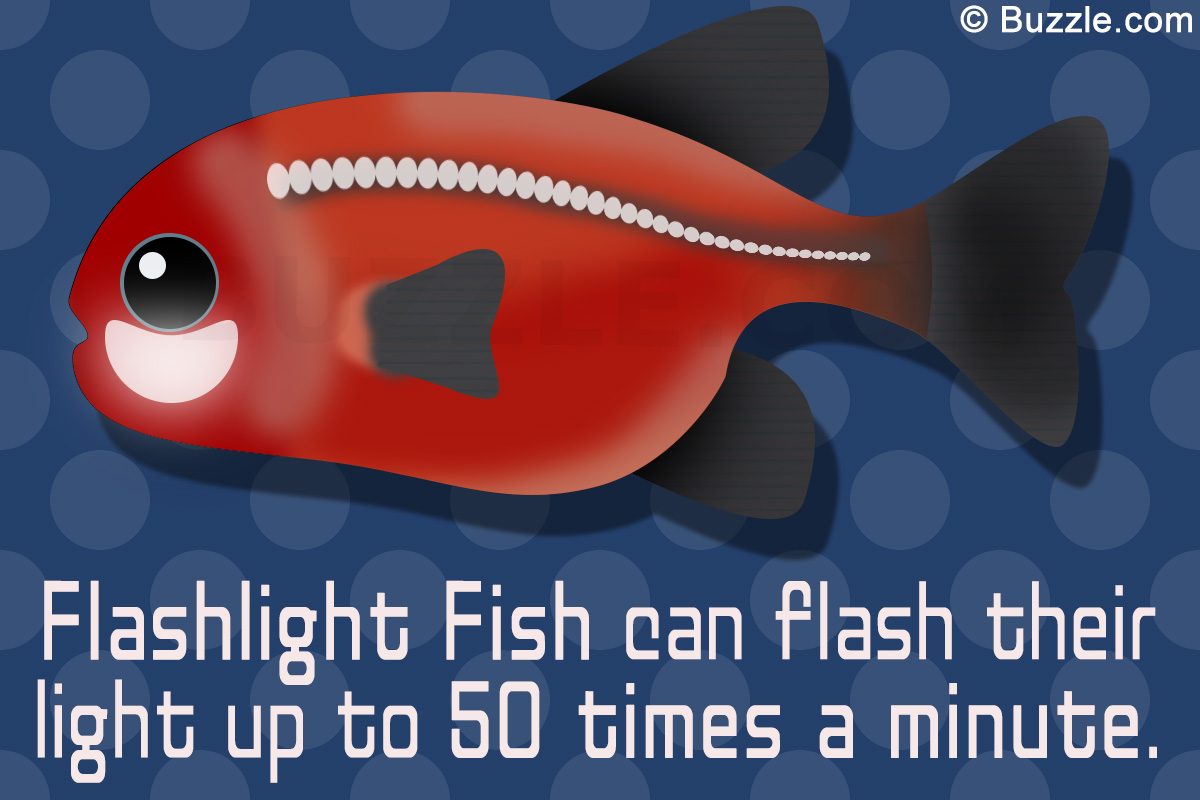 One of the more unique creatures found under the sea, the flashlight fish are a really marvelous sight to watch. PetPonder provides some interesting facts about these fish.

The light produced by the flashlight fish is believed to be the brightest among all bioluminescent creatures.

Flashlight fish are one of the sea’s most astounding phenomena. Just looking at these wondrous creatures can make anyone marvel at the creativity of nature. There are other animals too that produce light on their own, but these fish are just something else to look at. If you happen to find any while you are night diving, then you will see that from afar, their glowing organs look like two pairs of scary eyes staring at you, shining in the dark.

They use this light in a rather brilliant way to confuse and distract predators, and also to attract food. They even use it to communicate! Although they are rather rare as pets, it is not uncommon to keep them at home. However, the magic of witnessing them in their natural habitat is something entirely different, and something which everyone must experience at least once in their lifetime. The following paragraphs list some quick and interesting facts about the amazing flashlight fish.

✦ Flashlight fish are variable in length. Some can be as long as 10 inches, while some tinier varieties can be less than 5 inches.

✦ They are usually dark-colored and have a thin line running across their bodies.

✦ However, what makes these fish stand apart is the bioluminescent organs located under their eyes. These organs are shaped like beans, and the fish can turn the ‘light’ on and off quite easily.

✦ Flashlight fish are found from the west of the Indo-Pacific ocean to the south of Japan, and also in the Great Barrier Reef in Australia.

✦ These nocturnal fish inhabit areas near caves, hiding in them during the day.

✦ They prefer warmer waters like those of the Pacific and Indian Oceans.

✦ These fish like to eat zooplankton, small fish, and other small creatures.

✦ They use the light-producing organ under their eyes to attract their food.

And Then There Was Light

✦ Although the light produced by these fish looks magical, there is also a scientific explanation behind it.

✦ The glowing organs actually contain millions of bioluminescent bacteria that produce the bright-green light. This light can be turned on and off by rotating the bacteria inward and outward.

✦ These fish are known to communicate with each other by blinking their light. They also use it to divert predators. They swim in one direction whilst blinking the light, and then turn it off and swim in another direction.

✦ This light can be seen from more than 30 meters (100 feet) away. It is unlike anything humans can create. They blink their light up to 50 times a minute, sometimes more.

✦ To begin with, flashlight fish are rarely available in a pet store immediately. Most of the time, they need to be ordered.

✦ The temperature of the tank water for these fish needs to be between 72 to 74 °F. A higher temperature may affect the light-producing ability of the bacteria.

✦ The tank must be a minimum of 20 gallons per fish. The bigger the tank, the happier the fish.

✦ Also, these fish are nocturnal and hide near caves during the day. So make sure that there are enough hiding places for them in the tank.

✦ For feeding the fish, krill, live or frozen mysid shrimp, brine shrimp, or baby guppies are quite suitable.

✦ The location of the tank must be in a dark room. These fish run away from light, so they need the darkness to survive.

✦ Although these fish are usually kept in single species tanks, they fare well with similar-sized and non-aggressive tank mates like the Squirrelfish, Pinecone fish, and Cardinalfish. Flashlight fish are also not known to be aggressive.

Beautiful, passive, and intelligent are just a few words to describe flashlight fish. They are a lot of fun to study, and even more fun to witness in action. If you must keep them as pets, remember that they need very special care. Their specific needs must be met if they are to survive happily with you. But it is safe to say that their beauty really surpasses everything else.