How to Properly Care for Molting Hermit Crabs

Molting is a process in which a hermit crab faces a lot of stress. It is at this time that it require a lot of care and concern. With that thought in mind, here is information that will help you care for your molting hermit crab.

Molting is a process in which a hermit crab faces a lot of stress. It is at this time that it require a lot of care and concern. With that thought in mind, here is information that will help you care for your molting hermit crab.

What is a Hermit Crab?

Unlike what the name hints at, a hermit crab is not a true crab. It is a type of crab that does not have a very hard shell, and uses the shells of other animals for protection. These smaller shells are discarded for larger ones, as it grows in size. There are about 500 different species of hermit crabs found around the world. Most of them live on the ocean floor, but some live on land too.

Hermit crabs do not have a backbone, and instead, possess an exoskeleton (an outer shell that provides support for their body but does not provide much protection from predators). They have ten jointed legs, a flattened sensory antenna, two eyes located at the end of the stalk, and a soft, twisted abdomen.

Molting is a natural process of growing for a hermit crab, wherein, it sheds its exoskeleton and forms a new one. The frequency at which a crab molts depends on the growth rate and size of individual crabs, with smaller ones molting every 3 to 4 months, and larger ones molting once every year. This is a time that it needs to be treated with extra care, as it is defenseless and vulnerable.

How Do I Know When My Hermit Crab is Ready to Molt?

It is important to always be prepared for molting, as some of them may surprise you when you least expect. Here are the indicative signs.

How Do I Care for it When it is Molting?

The first thing to keep in mind is that when a hermit crab is molting, let it stay where it is. This process may take anywhere from 4 to 8 weeks for an average sized crab. Smaller crabs taking a shorter time and larger crabs taking longer. This is a time when it is in danger from other crabs. To keep it safe, it is of vital importance to keep the crab in an isolation tank.

Since this is a stage when the hermit crab is inactive, a glass tank or a small plastic tank will also serve the purpose. Once that has been selected, line the tank with a deep layer of sand, and provide chlorinated water as well as salt water in it. Also ensure that some calcium-rich foods such as calci-sand, cuttlebone, and boiled eggshells are available. A hiding spot as well as a few larger shells should also be provided.

There is a factor that is very important, and that is to make sure that the humidity and temperature are right. To do this, you might have to invest in a humidity gauge and a small heating pad as well. Temperatures on the high-end are recommended, as also proper humidity, as moisture is critical to the molting process.

Returning it to the Main Tank

It is advisable to wait until the crab is moving around as well as drinking and eating normally. This should take a few days to a couple of weeks.

Once the new exoskeleton has hardened, and you would like to return the crab into the main tank, you could give it a lukewarm dechlorinated bath.

What Do I Do With the Molted Exoskeleton?

As the exoskeleton is a rich source of calcium, it is needed by the crab to grow a healthy new exoskeleton. A crab that has just molted will usually munch on the molted exoskeleton for a few days after it molts. You can move the uneaten bits into the main tank once the crab has begun moving about. The uneaten bits (which consist of the parts that are too hard to eat) can be removed after a few weeks time. 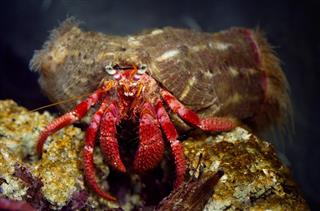 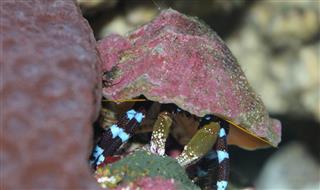 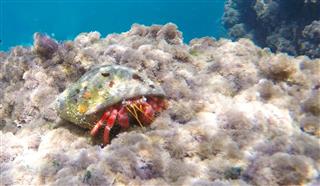 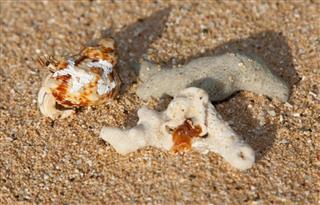 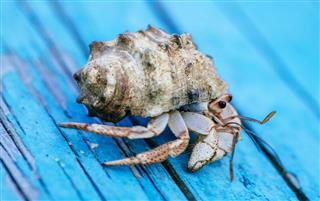