The most popular among the different types of pet spiders, Chilean rose tarantulas are named after their hair color. Go through this PetPonder article for some information about this exotic pet.

The most popular among the different types of pet spiders, Chilean rose tarantulas are named after their hair color. Go through this PetPonder article for some information about this exotic pet.

Chilean rose hair tarantula is a medium-sized spider with the adult females having a body length of around three inches. It has been noted that these spiders have a maximum leg span of six inches. Males are smaller, as compared to females, but the leg span is almost similar for both. One of the distinguishing features of this tarantula is their hair color. In case of spiders, hair is in fact the bristles on their body. There are no subspecies for this single species that belong to the genus Grammostola in the family Theraphosidae. However, three different color morphs are found.

In other words, Chilean rose tarantulas can be found in three different hair colors – the gray form with occasional pink hair, another type with full of dense pink hair, and the third is a brilliant copper form. Almost all of them have a uniform gray undercoat. The males have a more vibrant hair color as compared to females. It has been proved that the color forms are only color morphs, and are not different species.

How to Take Care of a Chilean Rose Tarantula

As mentioned above, Chilean rose hair tarantulas are the most popular pet spiders, and it is pretty easy to take care of them. They need a terrarium, with a temperature range of 65 to 85° F, and a humidity of 70 to 80%. The length of the terrarium must be at least twice as that of the leg span of the spider, and it must have some hiding places too (small clay flower pots are ideal as a retreat). Usually, a tank with more than 15 inches width is ideal for keeping a Chilean rose tarantula. The substrate can be made with a mix of peat moss and soil. Even shredded coconut husk can be used for this purpose.

In this case, the substrate must be at least two to three inches deep. Use a shallow and wide water dish, that has to be buried in the substrate. Make sure that the rim of the bowl is above the surface. These tarantulas can be fed with large crickets and locusts. However stop feeding and remove food from the tank, as they start molting. Tiny spiderlings can be fed with pinhead crickets and other small insects.

Chilean rose hair tarantulas are docile in nature. Even though they can inflict painful bites, these spiders are not that venomous, to cause serious health problems. However, allergic reactions may develop in some cases. Regular handling of these spiders is not recommended, as they may bite or release urticating hair, that can get stuck in your eyes. So, it is always recommended to use protective gloves and eye gear, while handling these spiders.

In short, Chilean rose tarantulas are perfect as pet spiders, but handle them with care. Even a small fall may prove fatal for them. Apart from that, they may also inflict bites. 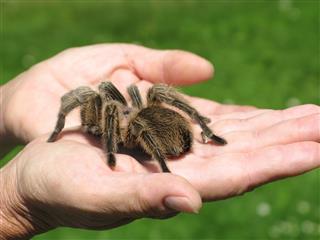 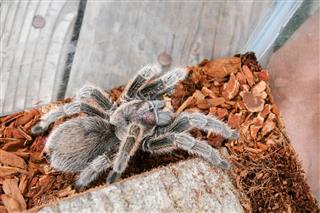 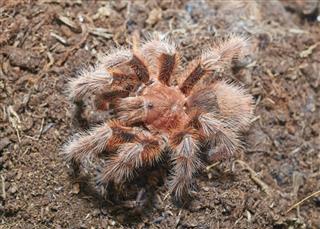 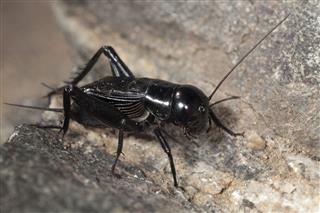