The bala shark is definitely not the kind of shark that would scare you and cause terror in your mind. This small-sized fish is often kept in aquariums. This PetPonder post lists some facts associated with this freshwater fish. 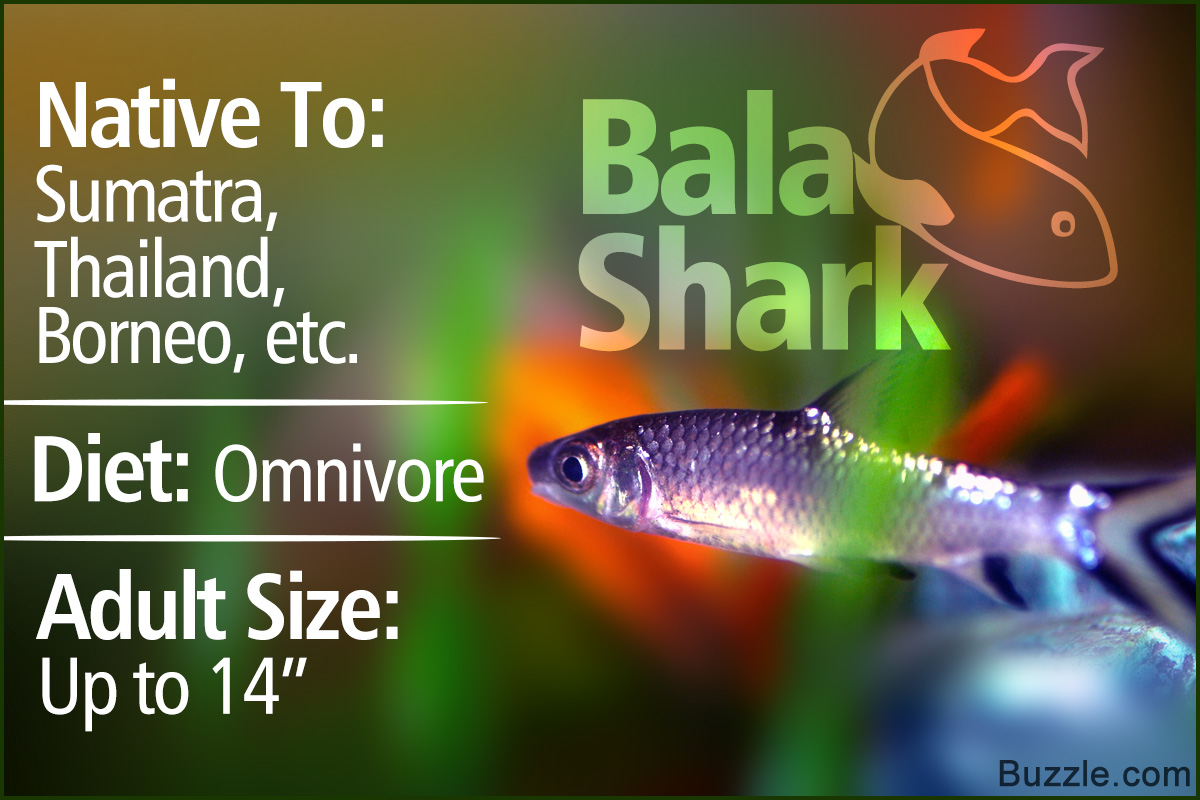 The bala shark is definitely not the kind of shark that would scare you and cause terror in your mind. This small-sized fish is often kept in aquariums. This PetPonder post lists some facts associated with this freshwater fish.

This fish is commonly called ‘Hangus Ekor’ (hung-oos-a-co) in Malaysia, which is its country of origin as well. Hangus means burnt, while Ekor means tail.

The bala shark does not fit into our regular image of how a shark should be. It is quite small in size and is actually very popular as a pet. The other names given to this fish are silver shark, tricolor shark, or shark minnow. It is not actually a shark. It is a fish that belongs to the family Cyprinidae, which also includes fish groups like carps, minnows, and barbs.

❖ The bala shark has a silver-colored body having black margins.

❖ The body is shaped like a torpedo, which is on similar lines to the body of the shark.

❖ The belly is slightly lighter in shade as compared to the rest of the body.

❖ It has big eyes that help it to spot its prey easily.

❖ It attains a maximum length of up to 14 inches, with the males being bigger than the females.

❖ This shark is found in rivers and lakes. It is found in Asia in the rivers basins of Mekong and also the Chao Phraya in Thailand, in the Malay Peninsula, and in Borneo and Sumatra in Southeast Asia. It inhabits the mid-water areas of large and medium-sized lakes and rivers.

Popular Fish for an Aquarium

❖ The bala shark is very popular as an aquarium fish. Its temperament is quite different from an actual shark as it is generally a peaceful creature.

❖ This shark is also easily available in most pet stores.

❖ As compared to other fish, it needs a relatively large aquarium. It may be noted that when the bala shark is really young, it can be kept in a small aquarium. As it grows, it will need a 6-ft fish tank.

❖ It may take 9 to 12 months to grow from 3 inches to 6 inches. It has a relatively slow growth rate.

❖ It is known to get along well with other types of tropical fish. It is better kept in a group of 5 or more.

❖ Being an omnivore, it can eat other fish and animals that are smaller in size.

❖ It is also easy to maintain as it does not require too much fussing around from any person.

❖ It takes a bit of time to adapt to a new aquarium and can tolerate temperature changes in the water.

❖ Ideally, you would be required to maintain a temperature which is between 22-28°C.

❖ Besides, you will also need to keep a check on the water hardness, which should be between soft to medium.

❖ The bala shark is not really aggressive in nature, and is also known to be a highly skilled jumper. Therefore, experts believe in keeping the aquariums covered.

❖ The bala shark needs a large area for swimming. You would need to keep this in mind as a part of fish care when you add plants to provide it an atmosphere that is as natural as possible.

❖ It also feels secure when in a group. The large size of this shark intimidates other fish and does not let it get bullied, which works in its favor.

❖ This fish has a lifespan of 10 years or more on an average, provided it is cared for properly.

❖ Being an omnivore, this fish can eat anything, especially live prey.

❖ It has a natural behavior pattern to hunt at the bottom of the river or lake for food bits.

❖ It is known to feed on small-sized fish, shrimp, insects, etc. It is also known to eat various kinds of algae that grow in the waters.

❖ In captivity, feed your bala shark dried flakes and granules. The gluten content in this fish food should be low, and it should contain nutritious ingredients such as spirulina algae and fish meal.

❖ It is not recommended to overfeed the fish as it is bad for their health. Feeding two small meals per day that last in frequency for 3 to 5 minutes each is better.

❖ When this fish reaches a length of 10 to 15 cm, it is known to become sexually mature. The reproduction takes place by external fertilization. This process is called the mating dance wherein the male and female rub against each other for a very short while―usually under a minute. It is believed that this is the actual mating process. The female scatters the eggs on the floor of the aquarium, and on the lake in the wild.

❖ Bala sharks do not look after their young. In the wild, they find separate grounds for spawning, and the fry have to look after themselves after they hatch.

❖ Bala sharks are prone to eating their own eggs or young ones. Therefore, it is always a good idea to either move the adult fish or the fry to another aquarium after they hatch.

❖ The females look bigger than the males during the breeding season.

❖ This fish has been listed as an endangered under the International Union for the Conservation of Nature’s (IUCN) Red List of Threatened Species.

❖ It is believed that the booming fish trade for this species, which led to its overfishing, may be one of the most probable reasons for its sudden decline in population.

❖ It is also believed that the forest fires that happened in Borneo in 1975, and the resultant pollution that they caused is also one of the reasons.

The bala shark is a beautiful and fascinating fish that makes a wonderful pet. These facts aptly describe its unique nature. Take proper care of your pet Balas and also try to participate in the efforts that are being made to conserve it.