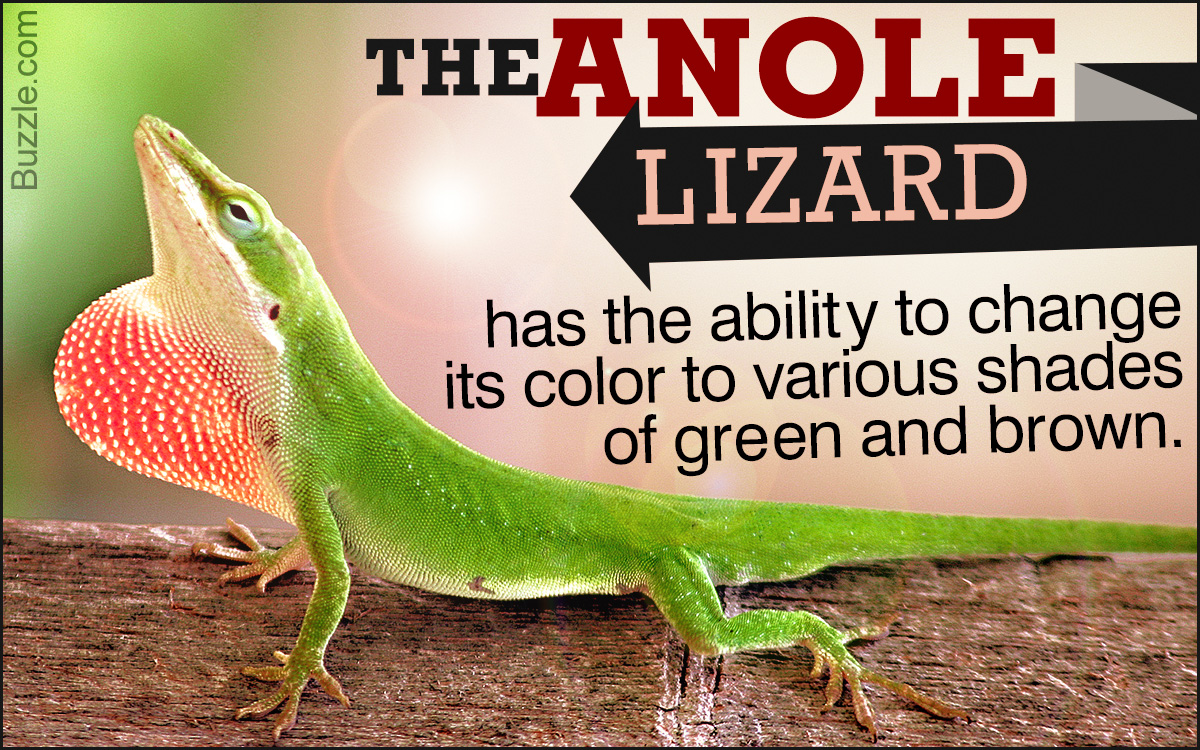 The Anole lizard (Anolis carolinensis) is a species of lizard that has a characteristic bright green coloration and is therefore also referred to as the green anole lizard. This species is also sometimes known as the American chameleon owing to the fact that it can change colors like them. The Anole lizards are usually found in warm and humid climates of the southeastern parts of the United States of America like Florida, Virginia, and Texas. Some have also been known to exist in the Caribbean. Of the different types of lizards, the anole lizard is arboreal, that is, it dwells in trees. Owing to this fact, its bright green color acts as the perfect means of camouflage. Another interesting fact about this particular lizard is that it makes no sound. Since it is one of the most popular choices that people make for an exotic pet, a thorough understanding of its characteristics and care is important.

Green anole lizards are about 4 – 8 inches long and have a long nose. Of their total length, their tails comprise a major portion of the same. The male anole lizards are bigger than the female lizards when they are fully mature. Their snouts are longer as well. The lizards are green all over, except that the males have a flap under their throat which turns into a fiery red color during territorial displays or when courting a female for mating. Another factor that distinguishes the males from the females is that the male lizards also have two sets of bigger scales at the point where their tail starts. These lizards are known to shed off their tails and grow a new one in its place. They also shed off their skin during the shedding season and then proceed to eat it.

Behavioral Traits
The anole lizards are highly territorial and two males are known to fight and attack each other, when threatened. When the anole lizards are happy and relaxed, they display a dark shade of green; but if the anoles are stressed, threatened, or ill, they change their color to different shades of brown which turn into darker and darker shades of the same color, depending on the severity of stress that they are going through.
Reproduction

The mating season of the anole lizards starts in early April and goes on till late August. Before mating, a male tries and gets the female’s attention by displaying the red dewlap under its neck and bobbing its head up and down. When the female chooses a mate, the male grabs a fold of skin above her neck, mounts her, positions his tail below the female’s vent, and commences mating.

2 – 4 weeks post mating, the female lays her first clutch of eggs and continues to lay more clutches until there are about 10 eggs. These eggs are buried in the soil near their habitat and left to fend for themselves. The eggs hatch in 35 – 40 days and the young anoles have to take care of themselves to survive.

This lizard can be a very expensive choice for a pet. Its average life span in captivity is known to be around 4 – 10 years. In its natural surroundings, the anole lizards are known to live in singularity as opposed to in a group. But in captivity, the lizard can be kept in twos or as a single entity. If one wants to keep two lizards as pets, then the best choice to make is that of two females. This is because, if two males are housed together they will end up fighting, and a male and female pair might breed.

The lizard needs to be housed in a container (like a tank) that is filled with a substrate. The ideal choice is to fill it with a reptile carpet. Avoid using rocks, pebbles, cedar barks, or any of these things as substrates, because they might be toxic and house too many bacteria on them.

The humidity levels of the tank need to be maintained at 60% – 70% at all times. The best choice is to spray the tank with purified water (tap water has several chemicals that can prove to be toxic for the lizard) and mist it several times a day. This is because the anole does not drink water from a water bowl but licks off the moisture that is formed on leaves.

This lizard is a cold blooded reptile and depends on its surroundings to generate body heat. Therefore, providing a UVB (Ultraviolet B) light becomes essential. It also allows them to form vitamin D3 and calcium. The UVB must be in working for 12 – 14 hours. Maintain the temperatures at 85 – 90 degrees F. Never use heat rocks for providing heat because they can burn the lizards. Along with this, a cool spot should be made available within the tank so that they can cool off and regulate their body temperatures. At night, opt for a black light or a purple light which is not too bright and disturbing, because anole lizards are active during the day and their level of activity stops at night.

These lizards are carnivorous in nature and their food will consist of small bugs and insects, cockroaches, crickets, spiders, and moths. When in captivity, the lizard must be fed daily with crickets, bugs, moths, and other insects as well. Another choice for its feed is that of wax worms. This should be made use of rarely because they contain too much fat. The crickets and other insects that you feed the anole must be dusted with vitamin powder to maintain their nutrition. An anole will not consume anything that is bigger than its head, so keep the prey size to about 1/4th of its head. Do not feed them anything that is toxic, like fireflies. Always be sure that the insects you feed them have no chemicals on them-like bug sprays (used for killing them). Always remove any leftover food or droppings from the tank because this can be extremely toxic.

It is very important that you clean the tank every 2 – 3 months. Some clean the tank every month. But in some cases, this has been known to cause stress to the lizards, leading to death as well. Make sure that you do not use any ammonia based products to clean it as it can be fatal to the reptile. The best option to use is that of warm water and vinegar to get rid of all the stains. Once clean and dry, replace the things to the original style.

The anole lizard is a fascinating creature and fairly easy to care for once the initial set up of the cage is taken care of and the information on how to care for them is studied. Many people are against the idea of keeping these lizards as pets. That is, of course, your choice. Yet if you are sure that you will care for the lizard well, then you can enjoy its activities for several years to come.