Also known as blue-belly because of the blue color on its neck and underside, a western fence lizard can make a really great pet. However, before getting one, go through this PetPonder post to get some tips on the lifespan, habitat, and care of a blue-belly lizard. 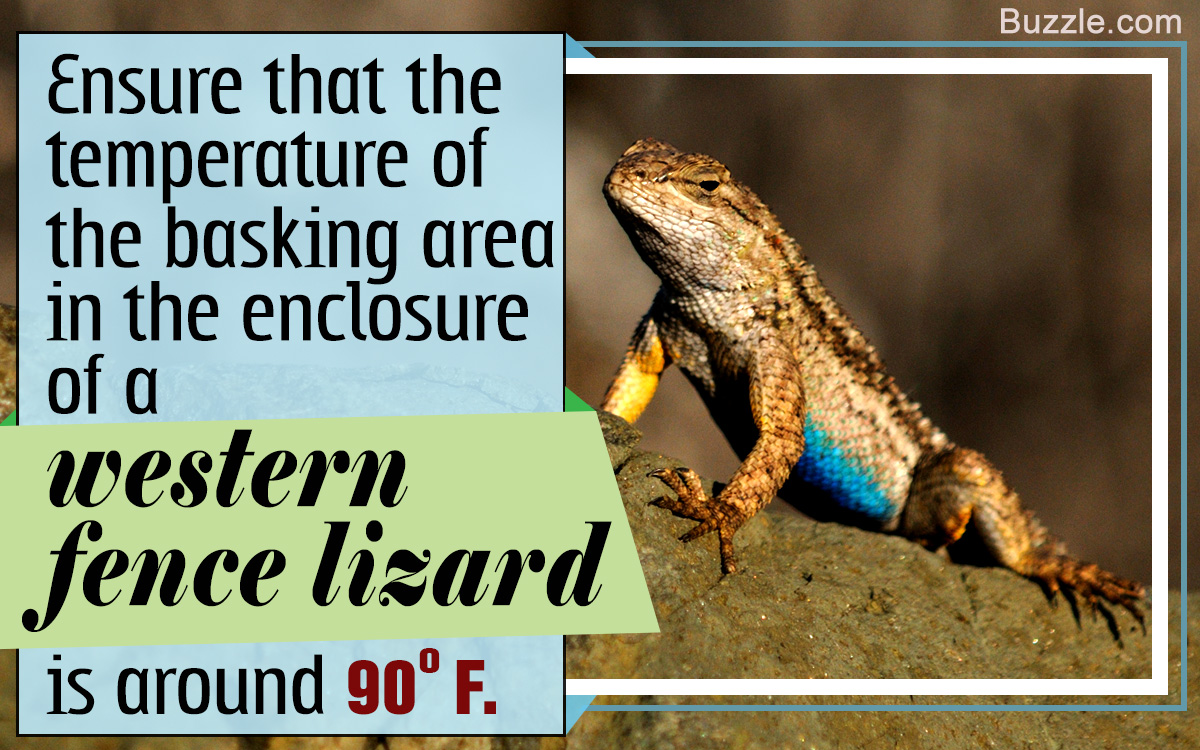 Also known as blue-belly because of the blue color on its neck and underside, a western fence lizard can make a really great pet. However, before getting one, go through this PetPonder post to get some tips on the lifespan, habitat, and care of a blue-belly lizard.

These lizards possess some proteins in their blood that are capable of eliminating the bacteria, borrelia birgdorferi , that cause Lyme disease.

The western fence lizards are native to California, but today, are found all over the world as a pet. As the name indicates, these lizards like to sit on an elevated place (like a fence) and sun bathe. That’s right!! It’s not just us humans who want to get a tan, but even reptiles too!! Jokes apart, lizards being cold blooded animals like to sit under the sun to regulate their body temperature.

They belong to the Sceloporus family, and along with blue belly, they are also called swift or spiny lizards. A fully-grown reptile is about 6 inches long. This tiny grayish-brown lizard has its belly and throat covered with shiny blue scales, hence the name “blue belly”.

Western fence lizards change color to blend in the environment, the color varies from brown to black, the legs are yellow-orange underneath. They have small scales all over their body.

An screen-covered aquarium can be a nice home for blue belly lizards. Opt for a 10-gallon aquarium, but if your pet is too large then go for 20-gallon one. Small lizards (2-2 ½”) can be placed in a 5-gallon tank. As all reptiles love to bask in sunlight, make sure to divide the enclosure into a warm area and cool area. You can place the tank under partial sunlight, as strong heat can dry out their home. The basking spot should be around 90 degrees F, the tank should be at moderate humidity, not extremely cold, nor extremely hot. You can always mist some water once or twice a day to maintain humidity. UVA and UVB rays are a must for these lizards, a 75-watt spotlight can provide these; however, place the spotlight 3 to 4 inches away from the tank.

These lizards are fossorial by nature, meaning they love to dig and bury themselves while sleeping. For this purpose, you can fill the tank with substrate such as sand, unfertilized soil, dirt, or cypress mulch. It is mandatory to put twigs or branches inside the tank, as these species love to climb. Alternatively, you can put live plants to maintain the humidity in the enclosure.

These lizards are fossorial by nature, meaning they love to dig and bury themselves while sleeping. For this purpose, you can fill the tank with substrate such as sand, unfertilized soil, dirt, or cypress mulch. It is mandatory to put twigs or branches inside the tank, as these species love to climb. Alternatively, you can put live plants to maintain the humidity in the enclosure.

Clean the tank every two to three weeks to reduce smell and dirt. The cypress mulch should be replaced every week, also dead plants and leaves, if any, should be removed. Transfer your pet in another aquarium or any place safe while you clean their enclosure. Replace the water everyday as your blue belly may defecate in it, which can cause disease and infections. Also, make it a habit to mist the cage regularly, preferably twice a day.

If you have more than one blue bellies, avoid housing two males together, as they are known to fiercely guard their territory, which may lead to fights and injuries. So, place male lizards separately, in another enclosure. Depending on the size of the tank, you can place 2 female lizards, with one male. A 20-gallon tank can easily support them, there are obvious chances that they will breed in captivity, so make sure there is ample space in the enclosure for the female to lay eggs.

A western fence in camouflage

Initially, you can try to experiment with the temperature inside the enclosure to check or decide a comfortable environment for them. The basking spot should be 90 degrees F, other than that, the rest of the enclosure can be at 75 to 85 degrees F. They are cold-blooded reptiles, and a lack of heat makes them slow and inactive. Suitable temperature for nighttime is 62 degrees, to ensure the climate stays warm, it is necessary to switch off the lights for 9 to 11 hours. This ensures that the temperature in the enclosure will stay warm and cozy for them.

In the wild, these lizards prefer small invertebrates like beetles, spiders, and flies. They even love to eat small lizards. However, in captivity, they can be fed crickets, ants, spiders, like black widow, wolf spiders, etc. You can even feed them meal worms, wax worms, earthworms, occasionally. Baby lizards are to be fed very tiny crickets and ants. A piece of advice, don’t feed them anything that is longer than the space between their eyes, it may lead to a choking hazard. Don’t feed your lizard everyday, 3 or 4 times a week is sufficient. When you feed them, step away from the enclosure, as initially, they won’t be comfortable eating in your presence. They need access to fresh water daily, ensure the water container does not have sharp edges. Wild blue bellies are not familiar to water dishes, and they prefer drinking water droplets. So a great option is to spray water in the enclosure everyday, to keep them adequately hydrated.

Calcium supplement is important for lizards, especially for pets. You can get calcium powder from a pet store. Just sprinkle a little amount of calcium powder on crickets, ants, or whatever insect you are feeding them. But read the manufacturer’s instruction regarding supplements carefully to ensure you administer the correct dosage.

Blue bellies can be very possessive about their territory, two males, if held in one enclosure, will fight for their territory. They tend to do quick pushups or an up and down movement to flaunt their blue bellies to other males, and of course, to attract females. Generally, they are not aggressive in nature, except when it comes to marking their territory. They are pretty docile and hardy in nature, but they need their hiding place, or you can say alone time. They are mostly active during the day.

As mentioned above, to attract females, males do pushups and show their blue bellies, females generally stay hidden, but when they are ready to mate, they appear. Once the eggs are laid, females bury them under moist soil, and guard them. Often, they do not require help from their male counterparts. Clutch size varies from three to seventeen, often a female lays 8 eggs. Spring time is mating season, and the eggs hatch sometime in August. They stick to breeding only during spring, and do not breed until the next spring. The size of juveniles is around 26 millimeters at birth.

Difference Between Males and Females

Male lizards have prominent blue-green colored bellies, which sometimes extends up to their tails. The females have either very light or faint blue color, or some do not have color at all. So, the next time you spot a lizard with a bright blue tummy, rest assured, it’s a male western fence lizard.

In the wild, their lifespan is short, since they are preyed upon by many animals, and they have the habit of basking at elevated places which makes them more vulnerable. However, if you provide ample food and water, lighting and heating, proper habitat, these hardy reptiles may live up to 5 years or more.

Western fence lizards are low maintenance, and they make fairly active pets. A wild lizard may require some time and patience to get used to your touch and presence. Most importantly, if you have the enthusiasm and time to care for it, then go ahead and get one as a pet.