Pet reptiles are a growing sector of the pet trade, and these low-maintenance pets are already popular in many parts of the world. This PetPonder post lists the best 'first pets' for reptile lovers.

Pet reptiles are a growing sector of the pet trade, and these low-maintenance pets are already popular in many parts of the world. This PetPonder post lists the best ‘first pets’ for reptile lovers.

All reptiles need lesser amounts of care and attention than conventional pets. This makes them an attractive proposition for first-time pet owners. However, the slight drawback of it is that reptiles also don’t crave for your attention as much as conventional pets, and are nowhere near as affectionate.

Buying a pet reptile is an adventurous choice, even for experienced pet handlers. Unlike dogs or cats, most reptiles haven’t been domesticated, and buying large or aggressive reptiles is a recipe for disaster. So, what about the other end of the scale? What tameable, friendly reptiles are there?

Here is a list of reptiles that won’t prove to be a headache for the first-time buyer.

Leopard geckos are terrestrial geckos, which means that unlike most commonly encountered geckos, they live on land. They are quite hardy, and don’t mind being handled by humans (some individuals may actually enjoy it). They survive on an easily manageable diet of vegetables and small insects. They grow to more than 20 cm in length and weigh up to 60 grams. The only problem with leopard geckos is that they are nocturnal, which means they will sleep for much of the time their guardian is awake.

Ball pythons are renowned for their temperate behavior. They tolerate handling quite well, and are one of the smallest pythons (though still large by normal standards). These pythons can be great pets for relatively older children. Ball pythons’ name comes from their habit of curling into a ball when threatened/distressed. So, if a ball python actually suits its action to its name, it’s time to back off. They are also known as the royal python. They grow to about 4 to 5 feet.

Corn snakes are the ideal pet if you are set on adopting a snake. They grow up to 6 feet, but are slimmer than the aforementioned ball pythons. They are naturally docile and reluctant to bite, an ideal trait for an urban pet. They are found in various attractive color variations, called morphs. Their longevity in secure captivity (c. 20 years) also means that your children will not have to encounter their beloved pet’s death in their formative years. These factors make corn snakes the ideal pet reptile.

These striking reptiles, colloquially called blue-tongued lizards, are quite intelligent for reptiles, and can make great pets. Like most lizards, they feed on greens, insects, fruits, flowers, etc. These are one of the few reptiles that may actively seek out their owner’s attention. These can grow up to 1.5 feet in length.

Despite appearances and conventional wisdom, some turtles can be troublesome pets. They can get severely distressed after relocating to different environs, and may reject food and aimlessly wander around their new surroundings. Painted turtles are less likely to suffer from such psychological trauma. They are hardy, but do not enjoy being handled. Children taught to be respectful of these turtles’ temperament can keep painted turtles for a long time. They can grow to 25 cm, but the norm is much lower.

King snakes are very mildly venomous snakes. Their method of delivering the venom, combined with the very weak toxicity of the venom itself, makes them harmless to humans. They are very docile and curious when calm, and only get distressed in extreme circumstances. In the wild, they feed on various items, including other snakes, but in captivity, they need to be fed dead rats―pinky mice would suffice. Kingsnakes, and especially milk snakes, have appealing, attractive patterns.

Tegus are reptiles similar to monitor lizards. They fill similar ecological niches, and live on a similar diet. Like monitor lizards, tegus can grow big, and are not, as a rule, recommended for beginners. However, the Argentine black and white tegu is remarkably docile, and even seeks out its owner’s attention if handled from a young age. Of all the animals on this list, tegus are the most high-maintenance. They need cages suitable for their size (at least 5-6 feet long), at least occasional UV lighting, and water to soak themselves in. They feed on insects (primarily crickets), pinky mice, and occasional treats such as fruits and vegetables, and eggs.

These Australian lizards are one of the most popular pet lizards. They are not aggressive, and the spines on their head are not sharp enough to cause any injury. Once settled into their new surroundings, they are rarely flustered. Though this is dependent on individual dragons, tamed individuals enjoy sitting on their owner’s shoulders, possibly because of the warmth they get from their owner’s body heat. They can grow up to 2 feet, considerably larger than the other lizards in this list, and consequently need a larger cage. They survive on a diet of greens, occasional fruits, and insects.

Like the leopard gecko, this tortoise is named after the superficially pantherine color pattern on its shell. They can grow to lengths of about 2 feet, and can weigh as much as 18 kg. They are largely herbivorous, and feed on leaves, fruits, etc. An important point to remember when buying a pet turtle/tortoise is that while the rest of the animals in this list can be satisfied within the environs of your home, turtles and tortoises need a moderately large area (a backyard should do just fine) to roam, and a freshwater source.

These hardy, low-maintenance, attractive, and docile creatures are the best options if you are looking to buy your first pet reptile. 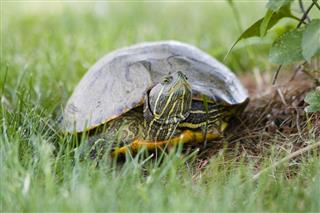 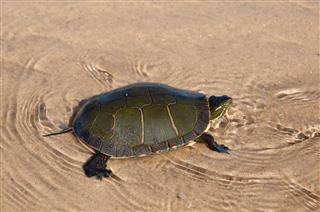