Practically Awesome Tips to Take Care of a Snowflake Eel

Known by several names such as clouded moray, nebulous moray eel, and starry moray, the snowflake moray eel belongs to the Echidna genus. PetPonder provides snowflake eel care info, focusing on aspects such as the size of the aquarium, compatible tank mates, and the eating habits of the snowflake eel. 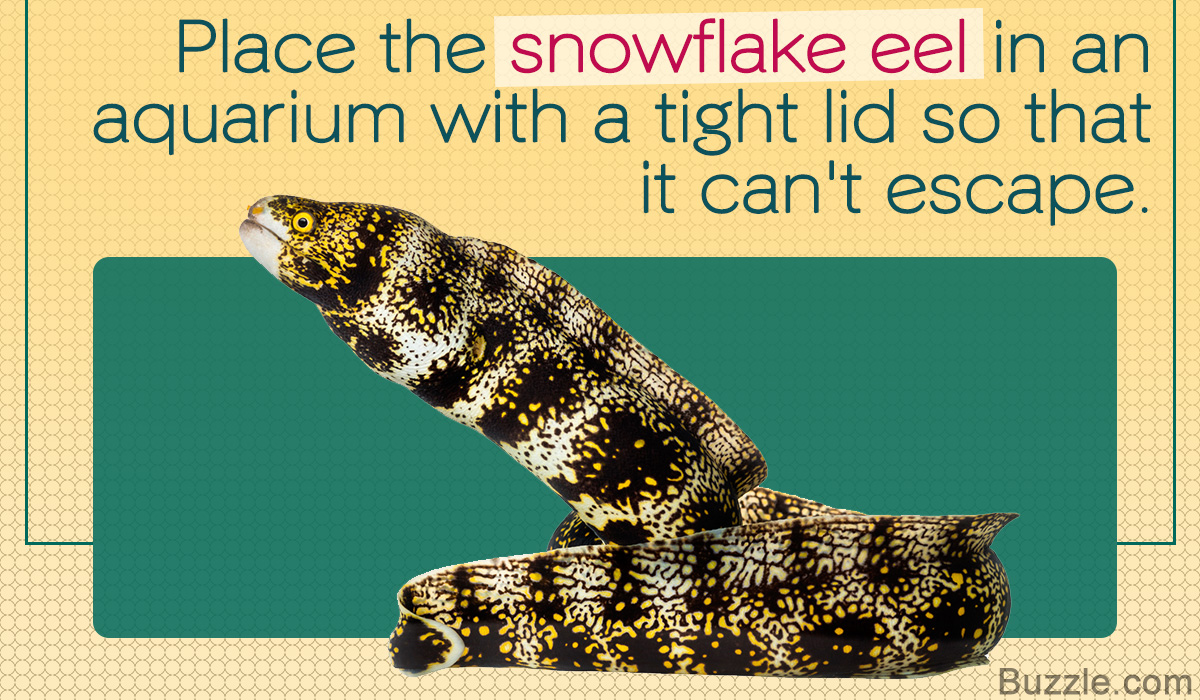 Known by several names such as clouded moray, nebulous moray eel, and starry moray, the snowflake moray eel belongs to the Echidna genus. PetPonder provides snowflake eel care info, focusing on aspects such as the size of the aquarium, compatible tank mates, and the eating habits of the snowflake eel.

Always use feeding tongs to lower food into the aquarium. Snowflake eels have a poor vision and a very good sense of smell, which is why if you feed them with your hands, they might mistake your hands for food and bite you instead.

Snowflake moray eels are true eels that are native to Indo-Pacific, Baja, Mexico, Costa Rica, Colombia, and Hawaii. They belong to the Muraenidae family, which includes about 120 species of marine eels that live in shallow tropical and subtropical waters. Their snake-like appearance can be attributed to the lack of pectoral and pelvic fins. Their skin secretes protective mucus that helps them swim through water. Unlike the nineteen species and six subspecies of freshwater eels belonging to the Anguillidae family that only move to the sea or oceans to reproduce, marine eels such as snowflake eels prefer brackish water. They have small gills that are located behind the mouth on either side. They have to open and close their mouth continuously so that water can circulate through the gills. These are quite docile, and far less aggressive than many other eels from the Muraenidae family. However, they can become aggressive during feeding.

Information about the Snowflake Eel

Closeup of a Snowflake Eel

Aquarium/Tank Size and Other Requirements

✦ Snowflake eels can grow up to 90 cm/36 inches. They can easily outgrow a small-sized aquarium, which is why they should be placed in a tank or aquarium of a suitable size. To be on the safer side, place them in an aquarium with the capacity of 75 gallons.

Snowflake Eel in a Hiding Place

✦ Before placing these eels in the tank, make sure that the tank environment mimics their natural habitat. So, you can cover the bottom of the aquarium in about three inches of aquarium sand. In their natural habitat, snowflake eels hide in the crevices or caves at the bottom, with just a part of their head sticking out. Once they spot their prey, they lunge for it. Make sure that you provide caves, rocks, or other hiding places in the tank that are large enough for the eels to fit inside.

✦ As these eels are nocturnal creatures, who hide during the day, and come out in the evening to eat, you should turn off the aquarium light at night, and switch it on during the day.

✦ Snowflake eels are messy eaters, which is why the tank would have to cleaned at regular intervals. Therefore, the aquarium should have a good filtration system.

✦ The aquarium will also require an internal water pump, protein skimmer, water heater, and thermometer. It should also have a hydrometer to check for the salt levels.

✦ Also, make sure that the rocks or decorations in the tank are secured, as this eel can topple them and damage corals. Another option is to bury a PVC pipe in a live rock.

✦ The pH of the tank should remain constant and stable, and it should match the requirements of the fish that are kept in the tank. It must be noted that even a minor change in the pH can be stressful for the fish.

About the Tank Mates

✦ In their natural habitat, they feed on crustaceans, which is why it is advisable to not place ornamental crabs, lobsters, or other crustaceans in the tank.

✦ These eels can be placed in a reef aquarium, which refers to an aquarium that contains corals, marine invertebrates, and small fish. However, as the eel grows, it might use its blunt, hard teeth to crush and feed on small-sized fish. So, refrain from placing fish that can be swallowed. Snowflake eels are less likely to feed on smaller fish, if they are fed properly. So, pay attention to their diet.

✦ Because these eels are not very aggressive, two snowflake eels can be kept together. However, there should be ample space in the tank.

✦ Mostly, these eels exhibit aggressive behavior only while feeding. However, care must be taken about their size, as larger-sized snowflakes might sometimes exhibit cannibalism. Moreover, certain moray eels such as honeycomb moray eel could feed on snowflakes.

Don’t feed it freshwater fish. It prefers live food, which is why it might take time to adjust to frozen food. Its diet can include fresh or frozen meaty food items such as:

On a concluding note, the snowflake moray eel is one of the easier moray eels to keep due to its manageable size. For it to thrive, you need to ensure that the water quality is good, and the eel is fed properly. It can be kept in an aquarium, provided the tank has a secure lid that prevents the eel from venturing out. When food is placed in the tank, snowflake eels can suddenly become aggressive while chasing the scent trail. During this time, it could bite other fish, as its vision is quite poor. It’s best not to place shrimp and crabs in the tank.