Important Tips to Care for Your Cute Pig-nosed Turtle

With its unique appearance and graceful swimming movements, the pig-nosed turtle is a popular pet for many experienced turtle keepers. In this PetPonder article, we shall discuss the requirements and care needed for this turtle in captivity, such as its preferred habitat, food, and maintenance. 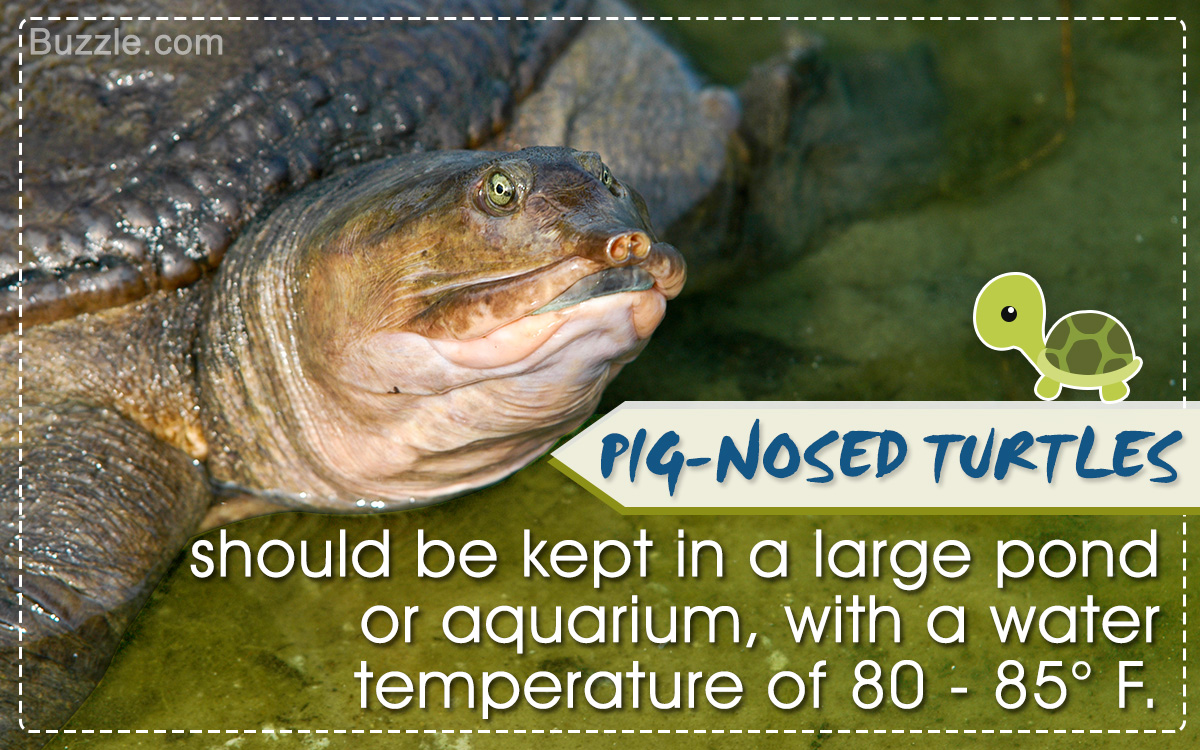 With its unique appearance and graceful swimming movements, the pig-nosed turtle is a popular pet for many experienced turtle keepers. In this PetPonder article, we shall discuss the requirements and care needed for this turtle in captivity, such as its preferred habitat, food, and maintenance. 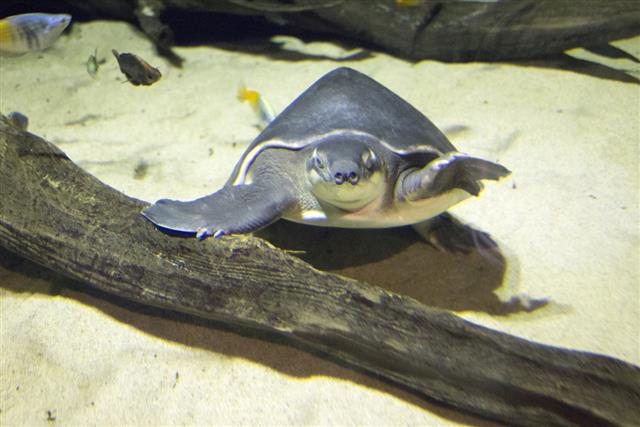 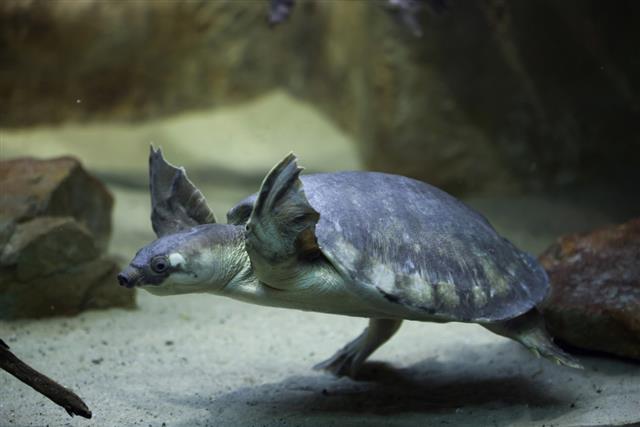 Although protected by the laws of Australia and New Guinea, pig-nosed turtles are gradually decreasing in number due to smuggling for the exotic pet trade, hunting as a food source, and habitat destruction by the growth of industrialization and the influence of cattle like water buffaloes. It is categorized as vulnerable in the IUCN red list.

The pig-nosed turtle is supposedly the only remaining living member of the genus ‘Carettochelys’. If you are looking to bring home a cute pig-nosed turtle as a pet, there are some things that you need to know about its care. That’s where the following sections on pig-nosed turtle care will help you out.

The pig-nosed turtle (Carettochelys inscuplta), also known as the Fly River turtle, or the pitted-shelled turtle, is a freshwater turtle species that is native to parts of Australia and New Guinea. This turtle has a very unique appearance that is unlike any other freshwater species in the world. Its feet are modified into flippers, similar to that of marine species, making it difficult for it to move on land. It usually has a leathery textured, green- or gray- colored shell. Its underside is a dull beige.

This turtle is aptly named for its fleshy, protruding nose, which resembles that of a pig. The nose has numerous sensory receptors, which it uses to hunt its prey in sand or murky waters. One can tell the gender of these turtles by observing their tails, where males have longer and narrower tails as compared to females. These creatures can grow up to 70 cm in length, and reach weights of nearly 50 lb. And although they appear similar to soft-shelled turtles, their shell carapace and plastron is bony in structure. 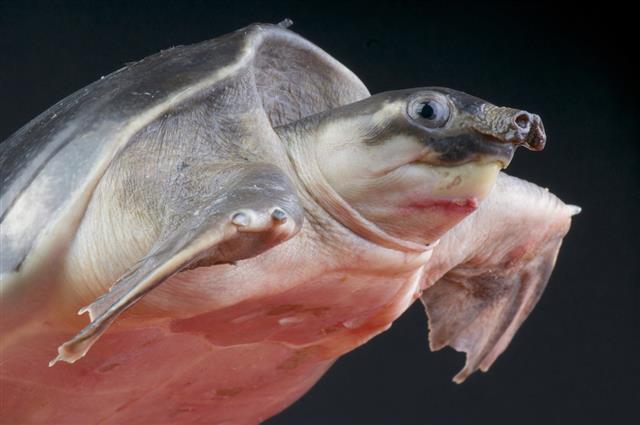 These turtles have not been studied well in their wild habitat. However, some observations suggest that, although these animals like to spend most of their time in the water, they are not completely aquatic. They are usually aggressive in maintaining their territory, but might form groups with a hierarchical order, when they are near hydrothermal vents on the banks of various rivers in the area. Let us now look at what you need to consider when you bring these unique creatures into your home.

In the wild, the pig-nosed turtle is found primarily near freshwater streams and rivers of northern Australia and some parts of southern New Guinea. Some of them can also be found in swamps and ponds.

In captivity, these turtles require very large ponds, pools, or aquariums, due to their large adult size. It is best if the habitat has many hiding spaces and aquatic plants. It is also important to maintain the water temperature between 80° and 85°F. The water should be clean, but not sterile. The owner must provide good filtration and UV systems. It is not necessary to provide a basking area for the turtle, as it spends most of its life inside the water. Do not add sucker fish or any kind of aggressive fish into the aquarium, as they may cause harm to the turtle.

In captivity, each tank should have only one turtle, unless the tank is exceptionally large with many hiding spaces, because two or more turtles will result in constant fighting. Even males and females should not be kept together for long periods of time while attempting to breed them.

What Do Fly River Turtles Eat?

This turtle species is omnivorous, and they feed on a wide range of plant matter, such as fruits and leaves, and animal matter such as insects, crustaceans, and mollusks.

In captivity, these turtles often show problems in feeding, but with the right care and patience, one can train them to follow a diet of turtle pellets, and a wide range of fruits and vegetables, such as figs, apples, bananas, lettuce, etc., along with occasional fish and shrimp treats. You can also feed them pinky mice and mealworms. Feeding sessions should be done three times per week, preferably at night, and any uneaten food should be removed from the tank to keep the water clean. Adults prefer a largely vegetarian diet, while babies prefer more animal matter.

Males reach sexual maturity at around 16 years of age, while females mature at 18 years. Turtles mate during the dry season, and the eggs are eventually kept in secure locations along river banks.

When the babies are fully developed, they hibernate inside the eggs until the external conditions are suitable, usually in conditions of rain. Due to this mechanism, all the babies hatch at the same time, giving them a better chance of survival.

Captive breeding is very difficult due to the highly aggressive and territorial nature of these animals. One must provide female adults access to land from the aquarium for the creation of nesting sites. Females breed every alternate year, but lay eggs twice in each year. Each clutch can hold up to 40 eggs. Incubation of these eggs may take around 2 – 3 months. Breeders have found small pieces of trout chow and mealworms to be a good diet for babies. However, the babies tend to grow very slowly in size.

The pig-nosed turtle is prone to stress and can fall ill quite easily. Poor water quality creates a large risk of bacterial and fungal skin diseases. It is extremely important that the tank is maintained well, and any infection be treated with the appropriate medications. Make sure that you are registered with a vet who has appropriate experience with such exotic pets.

Pig-nosed turtles are fairly high-maintenance pets, which is why they are ideal only for people who are experienced in caring for turtles. Proper care should be taken of the pond or aquarium, so that they thrive for many years. Captive turtles should not be released into the wild, and neither should wild turtles be made captive, as the stress of such change can harm their health seriously. 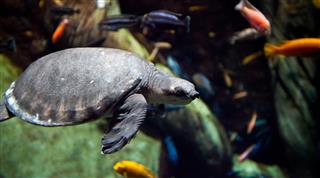 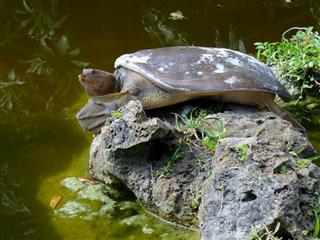