How is slow loris as a pet? Is it legal to have it as a pet? If you have such doubts, go through this article, for some details about this animal. 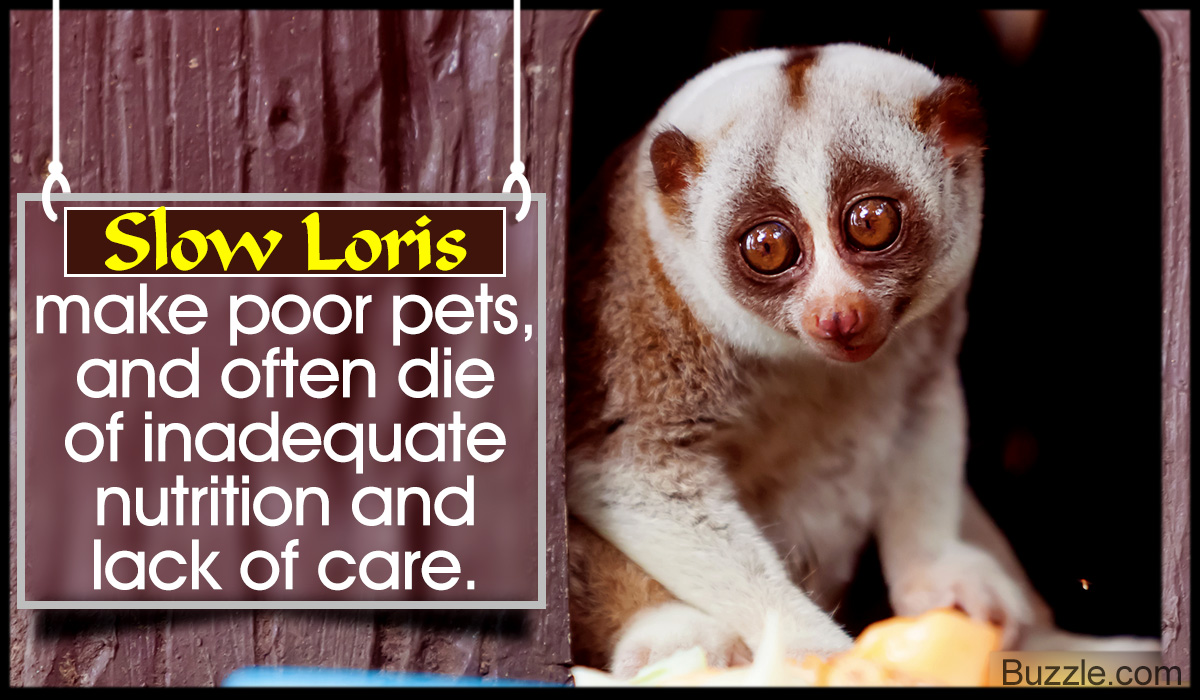 How is slow loris as a pet? Is it legal to have it as a pet? If you have such doubts, go through this article, for some details about this animal.

Undoubtedly, slow loris is one of the cutest animals in the world. As the name rightly suggests, they are slow-moving primates that are small in size. All these factors, along with the charming looks may make you think about raising them as pets. With more and more animals being added to the exotic pets list, it is natural for you think that these animals can be excellent pets.

Keeping a Slow Loris as a Pet

Is it possible to keep a slow loris as pet? How to get one? How to take care of slow lorises? All these are common queries about the animal. There are many people, who get attracted by the animal’s cute looks and small size. You may find videos of slow lorises posted on the Internet. Such videos showing docile slow lorises have a high viewership. The docile animals as shown in the videos may prompt people to get one as pet. It is said that these animals turn docile, only when they are threatened and they may not remain the same, always. Is a slow loris ideal as a pet? Let us find out. Before thinking of getting one, you must know why they are not suitable as pets.

They are among the few venomous mammals that can inflict horrible bites. When threatened, slow lorises may lick their brachial glands (in the elbow) that release toxins. They mix these toxins with their saliva that is delivered through their teeth. They are also found to apply these toxins on the body of their young ones, so as to protect them from predators. Their bites are not fatal, but may cause anaphylaxis in some people, thereby leading to death (which is very rare).

They Mark their Territory with Urine

Many animals have an inborn tendency to mark their territories. In most cases, urine or feces are used for this purpose and slow lorises are no exception. They can spray urine all over the place, leading to a horrible stink. Unlike dogs and cats, slow lorises cannot be trained to save your house from this stink. These animals have a strong body odor, that may be offensive for many.

As these animals are natives to Southeast Asia, they are found to feed on some rare fruits and plant matter, from that particular region. It will be difficult to provide these animals with their natural diet. Even though, they can be fed with various other food items like bananas, it is said that they may develop health problems with alteration in diet. As it is illegal to keep a slow loris as a pet, you cannot even approach a vet for treatment. You may either land up with a hefty fine or else your pet may die without proper treatment.

Another important factor that should deter you from keeping slow lorises as pets, is their conservation status. Though, there are no accurate figures of slow loris population, all the five species of this animal are classified as endangered or vulnerable, by the International Union for Conservation of Nature (IUCN). Their dwindling population is believed to be due to habitat loss and wildlife trade. They are hunted and sold as exotic pets or are used for making some traditional medicine. Captive breeding is not that successful, and so, the easiest option is to catch the wild ones and trade them. Illegal pet trade is one of the main reasons for the reducing numbers of slow lorises in the wild.

Raising a Slow Loris Could be Illegal

These animals are protected by law, in some of their native countries like Cambodia and Indonesia. They are also categorized as endangered species and the UN Convention on International Trade in Endangered Species (CITES) has banned international trafficking of slow lorises. In short, it is not legal to keep slow loris as a pet. You may also check the local laws, regarding this aspect. In some regions, a license is required to keep a slow loris as pet.

It is always better to let these animals lead a peaceful life in their natural habitat. Taking this animal outside their habitat, will be sheer injustice to them and will only contribute to their extinction. It is said that slow lorises caught from the wild are treated brutally. Their canines are removed without anesthesia.

The crude form of dental extraction often leads to bleeding, infection, shock and even death. They are not properly taken care of and are found to be malnourished and underweight. Though the laws are stringent, illegal trade of slow lorises is still going on. However, it is not wise to keep a slow loris as a pet, due to the above said reasons. If you get any information about such illegal practices, please inform the concerned authorities.

They are small-sized primates that belong to the genus Nycticebus. There are five species in this genus – Sunda slow loris, Bengal slow loris, pygmy slow loris, Javan slow loris and Bornean slow loris. These mammals are natives to some parts of Southeast Asia like Bangladesh, Vietnam, Indonesia, India, Borneo, Philippines and certain parts of China. Slow lorises have a body length ranging between eight to fifteen inches.

The maximum body weight this animal is around two kilograms (mostly found in Bengal slow lorises). Pygmy slow lorises have the lowest body weight (around 260 grams), among the five species. This animal has a round face with big round, bulging eyes. Their fur is short and thick with whitish gray to reddish undertones. Some of them have a dark stripe down their back. They have very short, stocky tails and their arms and legs are of almost similar length.

Slow lorises are nocturnal animals that are arboreal (spend most of their time on trees) too. They are often found sleeping on tree branches during daytime, as they can cling to the branches for very long durations. As they have specialized blood vessels on wrists and ankles, slow lorises do not develop muscle cramps, while resting on the branches for such long durations. Their diet in the wild includes fruits, mollusks, insects, lizards, birds, eggs, small mammals and plant exudate. The gestation period of these animals is around 190 days. Mostly, the litter consists of one offspring, but rarely, it can be two. Slow loris lifespan can range between 15 to 25 years.