Everything You Always Wanted to Know About the Slow Loris

Slow loris is one of those cute little animals with huge round eyes and furry bodies. Let us take a look at some interesting information about this animal, and its prospects as a pet. 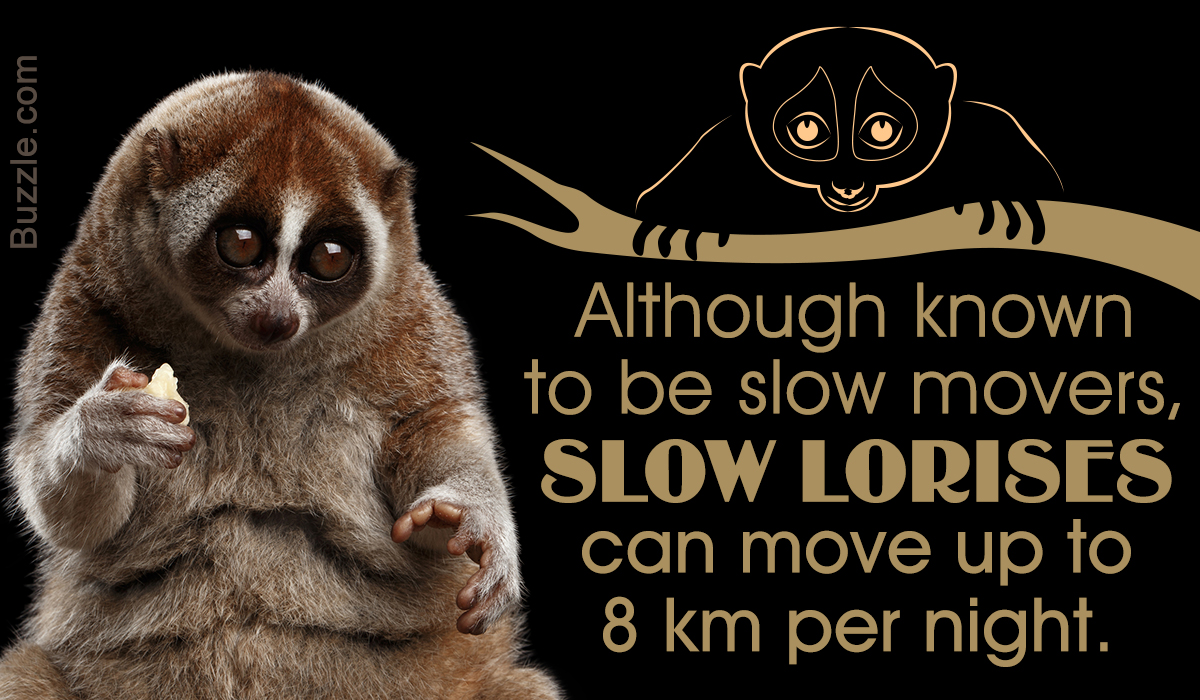 Slow loris is one of those cute little animals with huge round eyes and furry bodies. Let us take a look at some interesting information about this animal, and its prospects as a pet.

As the name rightly suggests, slow lorises are slow-moving animals. They are small-sized primates that are found in southeast Asian countries like Indonesia, Thailand, Borneo, Philippines and Vietnam. Slow lorises are believed to have strong therapeutic properties and are used in traditional medicine. These animals are also traded as exotic pets. They have been hunted by humans, for a long time and now, only a few are left in the wild. So, these animals are now classified as endangered/vulnerable. Apart from their use in traditional medicine and pet trade, habitat loss is another factor that has contributed to their dwindling population. As the animal is cute-looking with large eyes and a furry body, anyone may get tempted to adopt a slow loris as a pet. But, before that, it is advisable to know more about some basic facts about this animal.

Slow lorises are small-sized animals that grow to a maximum body length of around 8 to 15 inches and an average animal may weigh around 250 grams to two kilograms. While pygmy slow lorises are the smallest species, the largest ones are Bengal slow lorises. These animals have thick and short fur in different shades, but reddish-brown or gray coat are most commonly found. The hair around the eyes are darker whereas the fur on the ventral part may be of a lighter color. These animals have a white stripe-like marking in between the eyes. This stripe extends to the tip of the snout on one end and the other end lies on the forehead. They have small snouts and even the ears are tiny. The ears of this animal are mostly not seen, due to the thick fur. This animal with a round face have eyes that are large and bulging. It is their eyes that help these nocturnal animals to forage in low light.

The body of a slow loris is short and stout with stocky limbs that are almost similar in length. This animal has a long trunk that is one of the adaptations that help its arboreal life. Even the hands and feet have excellent grip so that the animal can hold on to branches for long durations. It can be said that these animals rarely come to ground and are almost totally arboreal. They move very slow and are rarely found to leap or jump between branches. Slow lorises are often found to use three limbs for holding on to the tree branches. The tail is also stumpy and is mostly kept close to the body.

Though, slow lorises are cute and small, they can impart toxic bites. These animals are believed to be the only poisonous primate in the world. They produce toxins in the branchial glands located on the inside of their elbows. When they feel threatened, slow lorises raise their hands above their head. This is their defensive posture, which help them to easily suck the toxin from the gland on their elbows. Once the toxin is sucked into their mouth, it is delivered through powerful bites. It is also said that they deliver the toxins not with their sharp canines, but with the small teeth located in front of the lower jaw. Such bites can be unexpected and extremely painful. The wounds caused by slow loris bites take some time to heal and may sometimes develop infection too. This is the reason why slow lorises that are used for pet trade have their teeth pulled out. These animals apply these toxins on the fur of their young ones, so as to protect them from predators.

Slow lorises are nocturnal animals that spend most of their life on tree tops and are active during night. During daytime, these animals curl like balls and sleep on the branches of trees. During nighttime, they hunt for prey and feed on insects, fruits, buds, shoots, small birds, bird eggs, etc. They are usually not found in groups and males are quite aggressive and territorial. They use their urine for scent marking, which is a major form of communication among these animals.

For slow loris, there is no special season for breeding and the gestation period is around 190 days. In most cases, the litter consists of a single offspring, but, sometimes it can be two. The parents carry the young ones and take care of them till they get weaned (takes up to six months). The young ones reach sexual maturity at an age of eighteen to twenty months. The lifespan of these animals is said to be around twenty years in captivity. They are often preyed upon by pythons, hawk-eagles and orangutans. They may defend themselves by rolling like a ball or with horrible bites.

How is Slow Loris as a Pet

You might have come across some online advertisements stating slow loris for sale. It is a fact that cuteness is one of the most important factors that people look for in a pet. In that way, a slow loris can be ideal as a pet. Apart from that, they are small in size and slow-moving too. However, they can impart toxic bites, which can cause immense pain and may also lead to infection. So, this animal is not at all suitable to be raised as a pet, especially, in families with other pets and small kids. It is a wild animal that cannot be domesticated fully, as training a slow loris is a difficult task. Apart from that, being an animal enlisted in the endangered species list, trading of slow loris or keeping them as pets is illegal in many countries. Even if you come across ads stating ‘slow loris for sale’ in USA or in any other region, it is better to ignore them. As mentioned above, the front teeth of these animals are pulled out, before being sold as pets. But, this procedure as well as the poor handling leads to infection and death of these animals, prior to their sale.

In short, slow loris is an animal that is facing extinction and so, it is better to avoid keeping them as pets. Illegal trafficking of this animal is one of the most common reasons for its dwindling population and so don’t encourage anybody to adopt these animals as pets. Let the animal live peacefully in their natural habitat.