The 'Rex' is a gentle, playful and intelligent breed of rabbit for all those looking for a lovable, low maintenance pet. Yes, they do eat a lot and they are most definitely messy. But, at least, they can be potty-trained more easily than others. (Phew, I was about to stop writing further when I typed in the word 'messy'). If it is a rabbit that you want, Rex is the perfect breed for all. 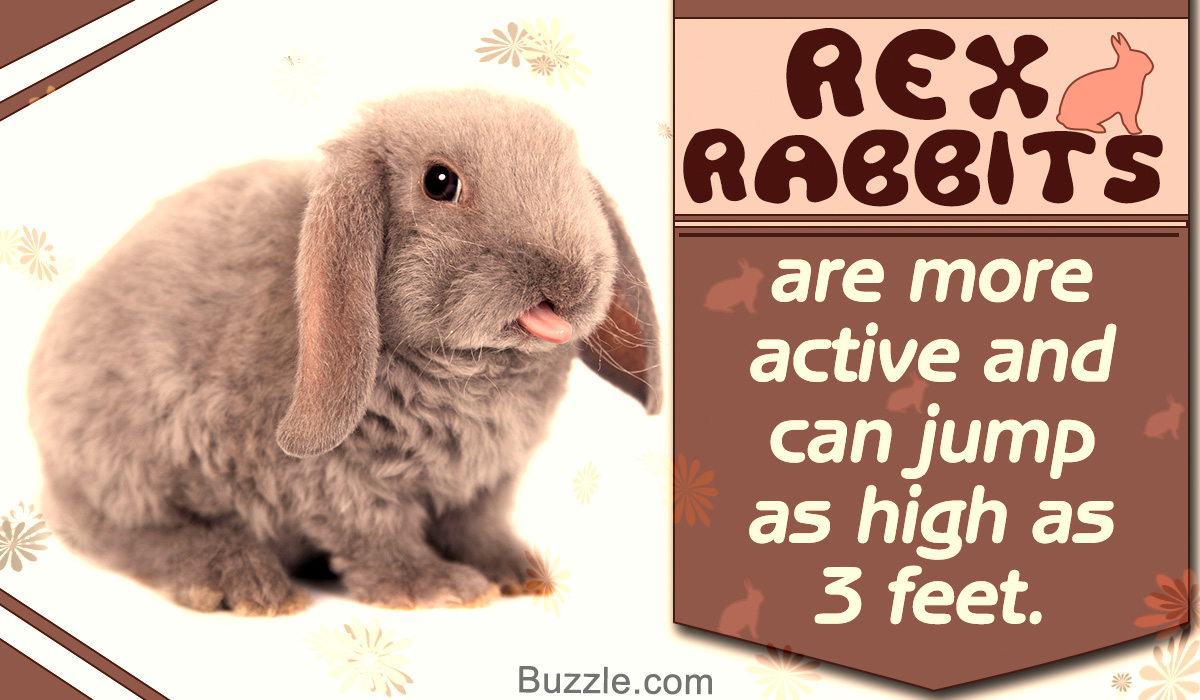 The ‘Rex’ is a gentle, playful and intelligent breed of rabbit for all those looking for a lovable, low maintenance pet. Yes, they do eat a lot and they are most definitely messy. But, at least, they can be potty-trained more easily than others. (Phew, I was about to stop writing further when I typed in the word ‘messy’). If it is a rabbit that you want, Rex is the perfect breed for all.

House pets are impulsive purchases for most of us who just love the sight, sound and feel of anything adorable, soft and furry. But, if you are making a planned purchase and a rabbit is what you have zeroed in on, a Rex could be the breed for you. Below, I list some of its more adorable (well, also the not-so-adorable) features:

This breed originated as a natural mutation (crossbreed) of the gray rabbits found in the wilderness of France. They were discovered in 1919, but were bred commercially for their fur and meat after attaining popularity. They made a successful debut at the Paris International Rabbit Show in 1924 and later made an entry into the U.S.A. Today, they are one of the most popular house rabbits in the world.

Rexes come in various colors, namely black, white, blue, castor, chocolate, sable, tortoise, seal, brindle, etc. Their peculiarity is the thick, upstanding fur that looks and feels like velvet. It ranges between 1.3 – 2.2 centimeters in length and the guard hair are actually the same length as the undercoat. This makes the coat thicker and gives it plush-like feel. It must be remembered that these low maintenance mammals do not require combing at all.

In fact, the only grooming they require is regular nail trims.

An average Rex weighs anything between 6 to 10.5 pounds, making it a fairly large rabbit in its family. Its broad head has pert upright ears that suit its fairly rounded body. These plump fur balls are generally friendly, curious and playful and make perfect foster moms for any other rabbits that you may own. They can be litter-trained easily, but (like us, human beings) do need proper incentives to learn anything new. A happy Rex can live up to 6 years (despite being in human company).

Rexes require low to medium activity levels. They are equally content sitting on someone’s lap and acting out their perfect pet part. These incredibly soft creatures do require a physical show of affection, in the form of petting or stroking. Though, a lot of fun, they require lots of attention, if their non-destructive and friendly temperament is to be maintained in the long run. Lastly, it is essential to keep the cage size, in accordance with their size – i.e. large!

Rexes feed. No, I do mean feed. There will be times that you will think that you have pet horse. The good thing however, is that their food is easily available and does not tax the budget. Rexes mostly feed on commercial rabbit pellets, timothy hay, lucerne hay, fresh greens and fresh fruit. They need up to a quarter cup of pellets per day, for every 5 pounds of their body weight.

Fresh greens can comprise the main portion of the rest of their diet. Fruits should be limited for their high sugar content and for that you need a heart of steel. After all, how else can you deny him his favorite food, when he looks at you with big watery eyes begging you give it.

Healthwise, Rex rabbits are generally sturdy. They are prone to cold and flu, so it is best to keep them indoors during extreme weather. They have fragile skeletons, so proper care should be taken, while handling them. Males should be neutered after about 4 months of age, to prevent the aggression arising out of sexual maturity. Females can also be neutered, as this reduces the risks of uterine cancer. Both the males and females live longer (8 – 11 years) after spaying. As long as, the standard ear mites and fleas are taken care of, your Rex should be a really healthy pet. It is also essential that your Rex is vaccinated against calicivirus at a young age. There are two main types of Rex rabbits: Mini Rex and the Standard Rex.

A standard Rex that weighs about 8 to 12 pounds has a lovely velvety fur. These rabbits come in many different colors like: black, red, opal, chocolate and white. They are available in various marking styles including, castor, californian, broken, chinchilla and black otter. They have straight ears and the coat doesn’t require too much grooming. Standard Rexes are good-natured, and are known as enatic creatures.

The interesting fact about this breed is that they can easily accept the baby of any rabbit and nurture it like their own. These rabbits are generally quiet and may find it difficult to live in a chaotic environment.

Mini Rex rabbits are very small rabbits, they weigh about 3.5 to 5 pounds and come in various colors including, blue, black, red, seal, blue-eyed white and broken colors. These are very friendly pets and they have very beautiful fur coats. They can be toilet trained very easily. Mini Rexes are loved by all adults as well as children, and they also enjoy human company. These things make them lovely house pets. They have a longer lifespan and can live well for more than 10 years.

I conclude claiming Rexes as the best pets for those who want one, but are already over and done with the responsibilities of diapers and Cerelac. Get them! You will fall in love so quickly with your curious, albeit playful pet that you will learn to ignore that strong odor they tend to retain. Oh, sorry! Did I forget to mention that rabbit urine contains a lot of ammonia making their pee stink like hell.