The gestation period for pregnant guinea pigs is 60 to 70 days. Usually, their pregnancy is non-problematic. However, they are more prone to health problems in the latter stages of pregnancy. 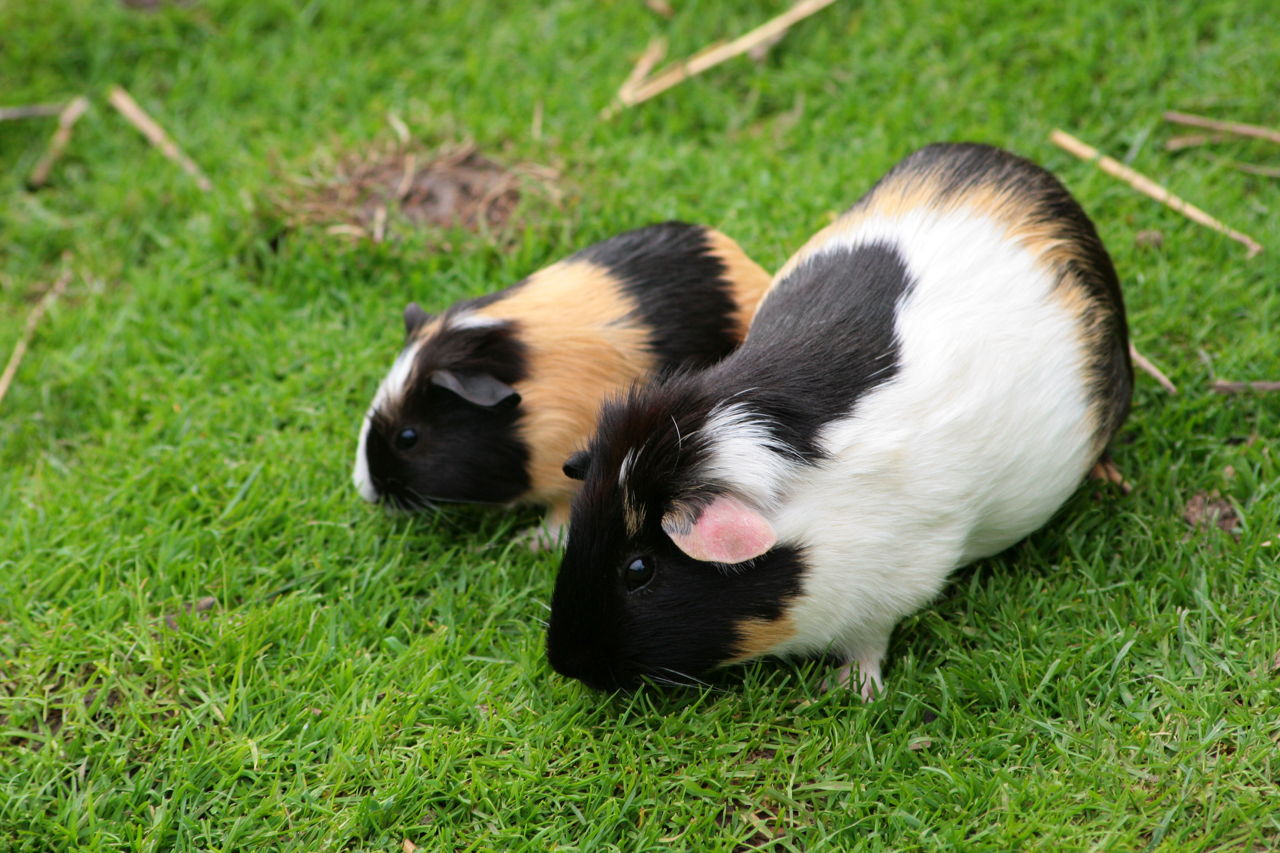 The gestation period for pregnant guinea pigs is 60 to 70 days. Usually, their pregnancy is non-problematic. However, they are more prone to health problems in the latter stages of pregnancy.

Female guinea pigs, also known as sows, begin having oestrus (the time when they are fertile) every sixteen days within the first three to five weeks of life. Although they can breed at a tender age of five weeks, breeding at this age is quite early and can be risky. Therefore, it is recommended that a sow should weigh at least 400 gm when she is three months old and mating should preferably be done once she is a little older than this.

A swollen vagina with discharge is the common symptom that you may see in a sow during her oestrus. Besides this, you may also observe some behavioral changes like mounting cage mates, growling, and raising the rear end into mating position when touched. Their mating usually occurs within a span of a few hours, and the male guinea pig (also called boar) should be about three to four months of age. To assure their mating, you should look out for a discarded waxy ‘copulation plug’, that forms to prevent the sperm from escaping the vagina, just a few hours after they have mated.

It’s not that easy to spot a pregnant guinea pig during the initial stages, and by the time you realize she is pregnant, she will be close to delivering the babies. However, the best way to determine whether she is pregnant or not is a lack of behavioral changes that she exhibited during her oestrus period.

Another method is to weigh the female weekly, as her weight will considerably increase with each passing week. Although neither physical nor behavioral changes are visible during the initial four weeks, towards the end of her pregnancy i.e. during last two or three weeks, she will become quite plump, and when you will touch her stomach you will be able to feel and see the movements of the babies. When birth is likely to occur, her pelvic bones will be wide and open, which you can feel by keeping your fingers underneath her belly just a couple of centimeters ahead of the anus.

The normal birth process usually takes place in the daytime and lasts for 15-20 minutes. The sow will give a distinctive groan when she is going into labor and the first baby will normally appear after 5 minutes of labor. The time interval between the birth of each baby is somewhere between 3-5 minutes. A normal female can give birth to 2-3 babies, sometimes even one, and in rare cases she can have up to 8 babies. During her delivery, do not intervene unless it is necessary and if in case the labor extends longer than the expected time, take her to a vet as she can even die of exhaustion.

As the babies appear, she will tear the ambiotic sac with her teeth and clean them off. Later, she will eat the placenta and other birth fluids or by products. In case a baby is not breathing or moving, pick it up, and holding it at arm’s length with its head away from you, and spin around once. This will remove any blockages from its throat and the baby will start breathing.

Care Before and After Delivery

During her gestation period, you can feed the female with alfalfa hay, which will give her a bit more protein and calcium. Giving her fiber-rich and vitamin C-rich foods like kale, brussels sprouts, parsley, broccoli leaves, cauliflower, strawberries, broccoli florets, oranges, cabbage, etc. can contribute to prevent hair thickening and toxemia, which are quite common in late pregnancy. Be careful while holding a pregnant guinea pig and don’t squeeze her stomach too hard, as you may end up hurting her and the babies.

After the delivery, the sow is likely to enter heat, so during this time, keep her away from males, as back breeding can be extremely stressful and could kill her. Guinea babies are quite furry and are able to open their eyes and walk within an hour, if this doesn’t happen, don’t delay and take them to the vet. Unlike other babies, they don’t require any special food and can eat adult guinea pig food. Make sure that clean water is always available, as the mother will need more water than normal to produce milk.

Pregnant guinea pigs don’t require a separate cage during delivery, provided there are no male guinea pigs in it. Just be there for her and make sure she has a comfortable and well-ventilated environment during those crucial days.