Life Cycle of a Praying Mantis And Other Intriguing Facts

Praying mantis is a carnivorous insect notorious for eating almost any living thing that comes its way. The body structure of a praying mantis is like that of most insects, which is divided into three parts―abdomen, head and thorax, and the antennae that are used for smelling. 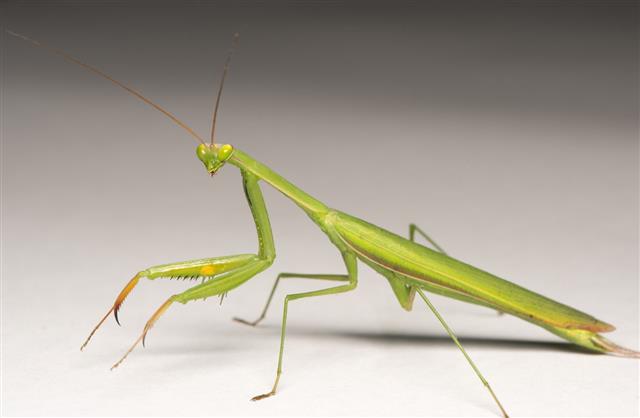 Eggs: After fertilization, the female lays 10 to 400 eggs in the autumn season. These eggs are secured on leaves, stems or any other safe surface. The egg houses are interesting, frothy, liquid-like structures present in their abdomen, called ootheca. It has a compartment-like special formation for every single egg. These compartments have a small one-way, valve-like structures that helps the insects to hatch with minimum efforts. These ‘oothecas’ are meant to protect the baby mantis during the cold weather.

Nymphs: The developed small-sized mantis come out of the oothecas in the spring season. The first meal of these small praying mantis is surprisingly, their siblings! These nymphs also eat flies, aphids, and small grasshoppers. These nymphs take the whole summer season to grow up to adulthood. 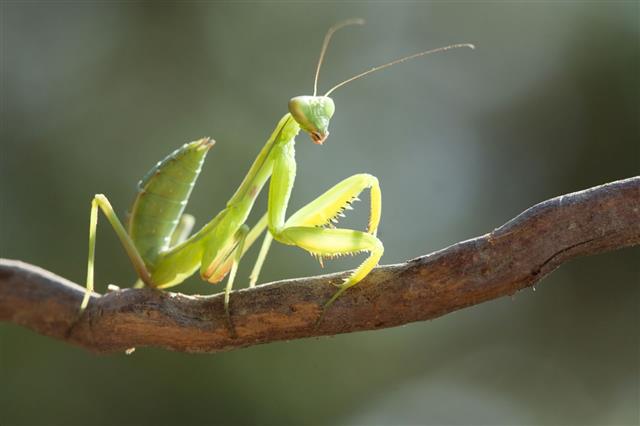 The abdomen of the praying mantis is elongated. In adults, this area is covered with wings. The head is triangular with mounted compound eyes. The size and the color of the praying mantis varies according to its species. The colors range from faint green to faint pink, but most commonly, they are pea green or brown in color. Some praying mantis are pink in color, especially the species found on similarly-shaded flowers found in tropical regions. Praying mantis have very sensitive eyes that move in a 1800 angle, which enables them to see predators from a distance of 60 feet. 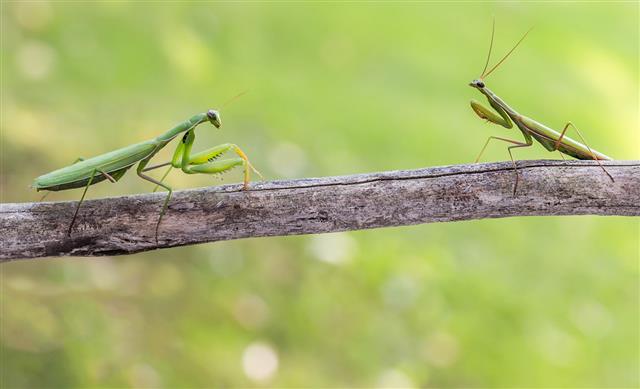 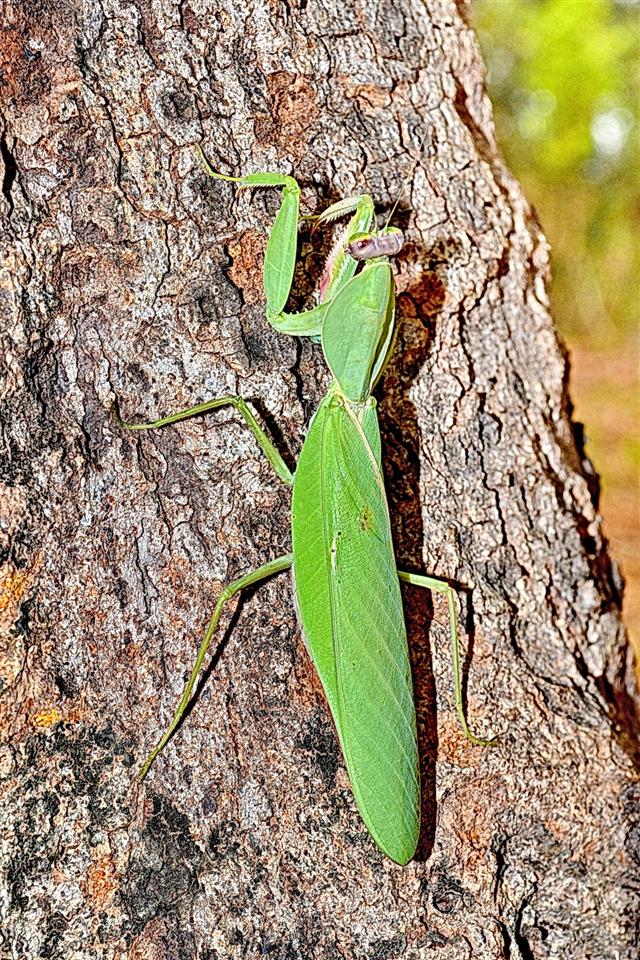 The humble forelegs that gave this name to the praying mantis are actually extremely well equipped, with sharp spine like rows that help them to catch their prey. The praying mantis mimics the leaves and stems in a way which makes them almost invisible to their prey. When the prey is within the reach, they put their pincer-like foreleg forward and grab it. Most often, they start eating their prey when it is still alive. The prey of the praying mantises are usually fellow mantises, butterflies, beetles, spiders, grasshoppers, crickets, and almost all other invertebrates. Some species of praying mantis eat vertebrates like small frogs, mice, lizards and even hummingbirds. 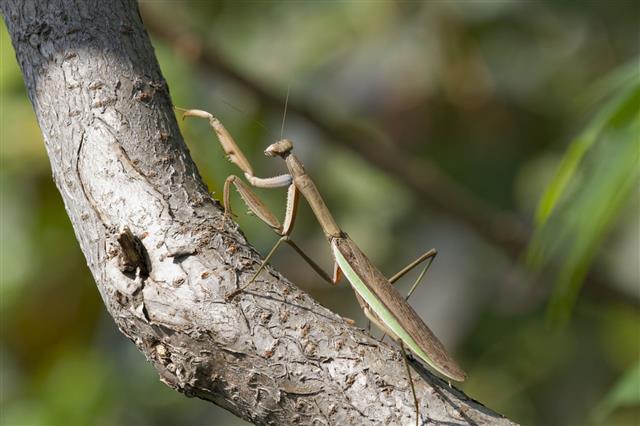 Praying mantises are diurnal insects, which means they work and hunt only during the day time.

They shed their exoskeleton (outer skin layer) for a record 12 times, before growing into a complete adult. 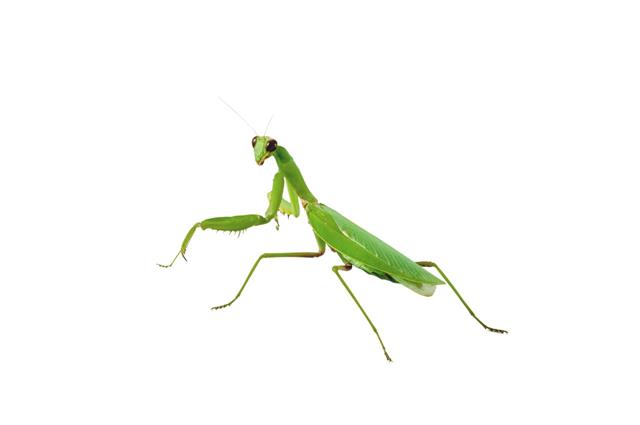 Praying mantises are useful insects for gardeners and farmers as natural insecticides. Hence, it is legal in the US to sell and keep only native praying mantis species. 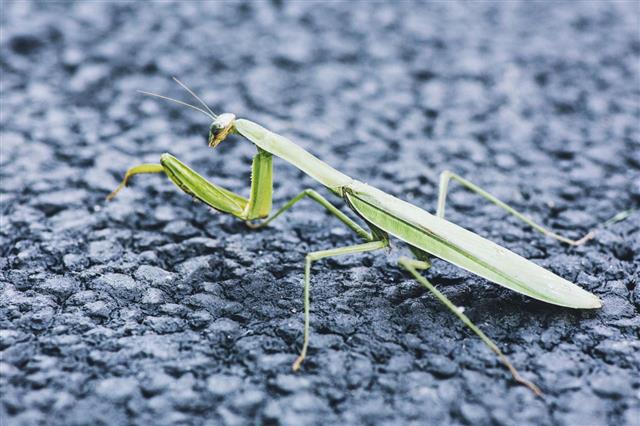 When threatened by predators, the praying mantis stands tall with an open mouth, fanning wings and spreads out it forelegs to look bigger than their actual size in order to scare the opponents. 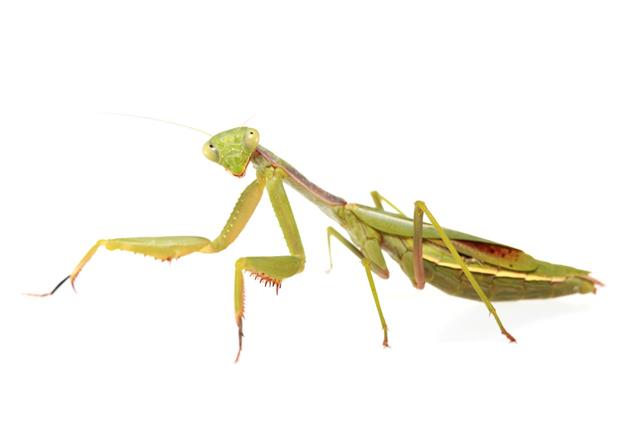 Praying mantises shed their exoskeleton (outer skin layer) for a record 12 times, before growing into a complete adult. 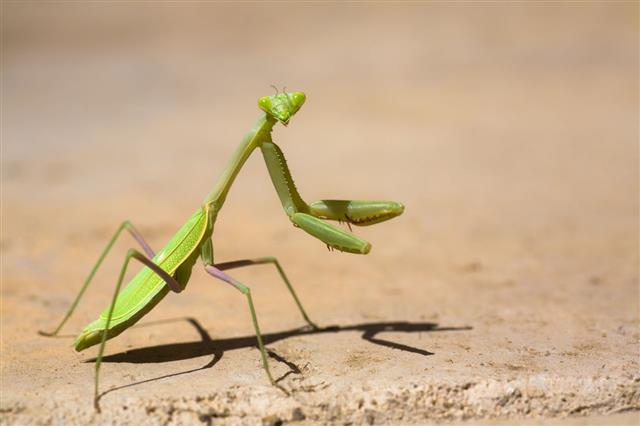 Some species of praying mantis never grow wings at all and those who have the wings fly only when the female mantis spreads the pheromones (chemical signals) to attract the male. 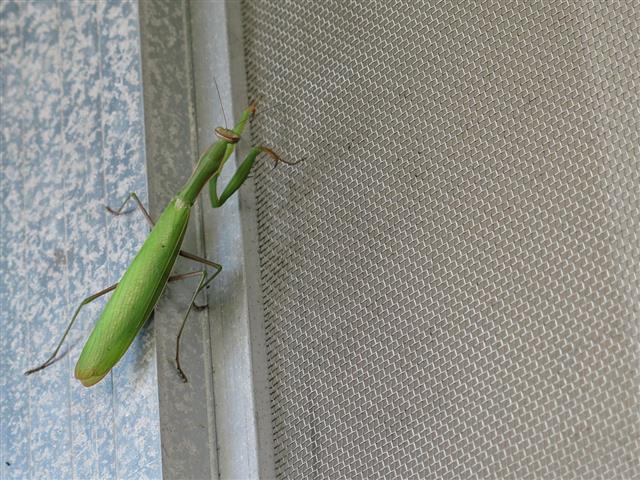 An interesting fact, the praying mantis has only one ear, that uses the same ultrasonic frequency that the bats use, which are by far their biggest predators.

The praying mantis name is often misspelled as ‘preying’ mantis which is possibly because of their significant preying characteristics. It is always a fun to observe an insect and especially when it is the ‘alien-like’ triangular headed praying mantis. 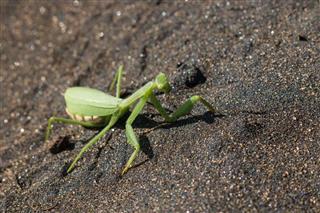 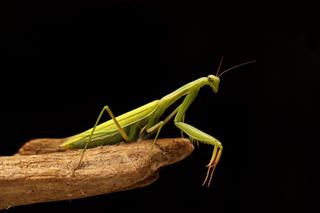 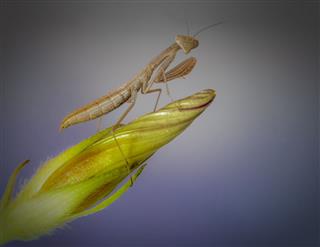 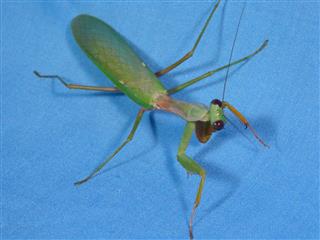 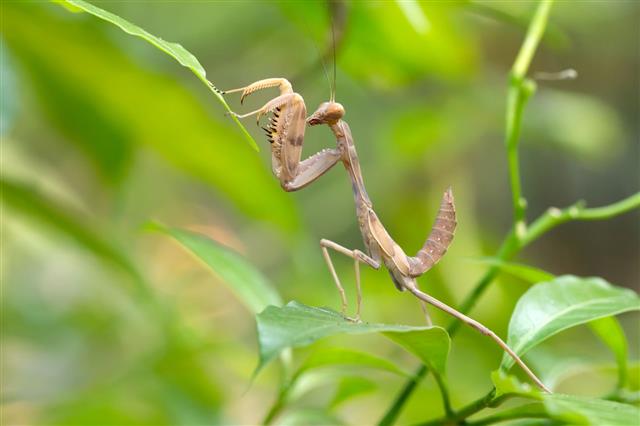