What Do You Think the Lifespan of a Painted Turtle Is?

The little painted turtle can win anyone's heart with its innocent eyes and bright colors. If you want to get one of these slender creatures as a pet, then read this article regarding how to care for one.

Home / Pet Types / Reptiles / What Do You Think the Lifespan of a Painted Turtle Is? 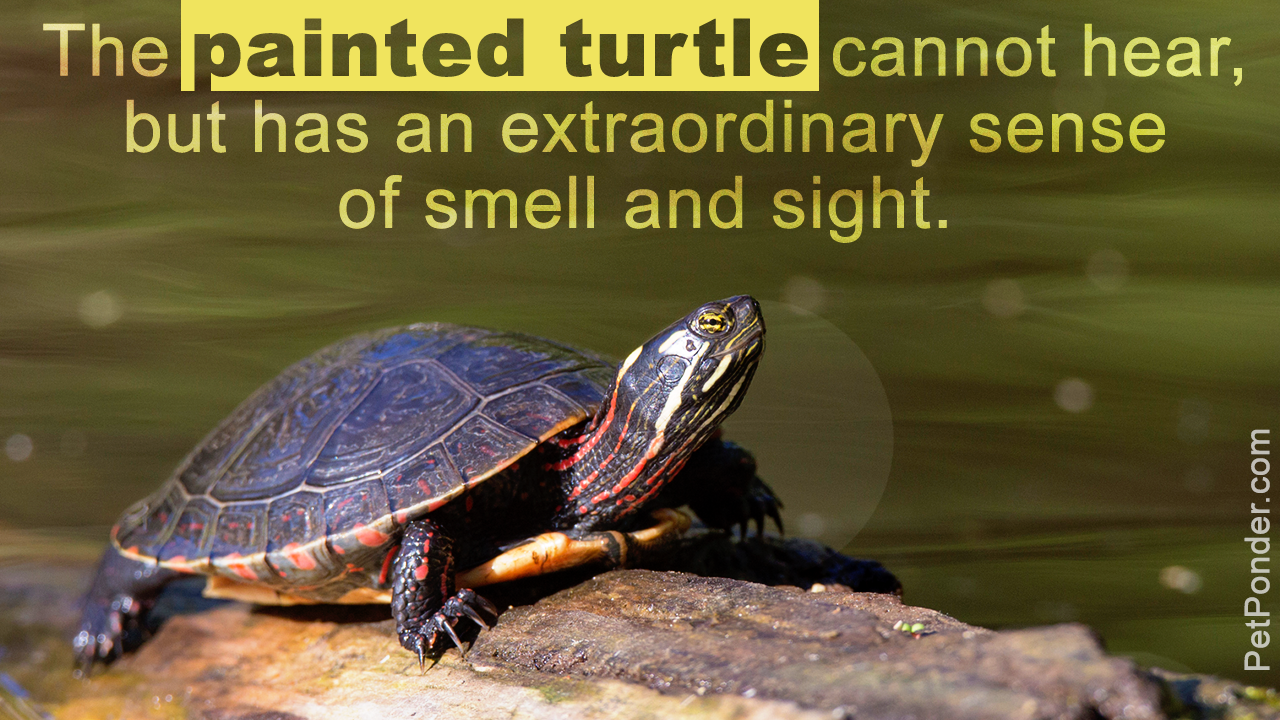 The little painted turtle can win anyone’s heart with its innocent eyes and bright colors. If you want to get one of these slender creatures as a pet, then read this article regarding how to care for one. 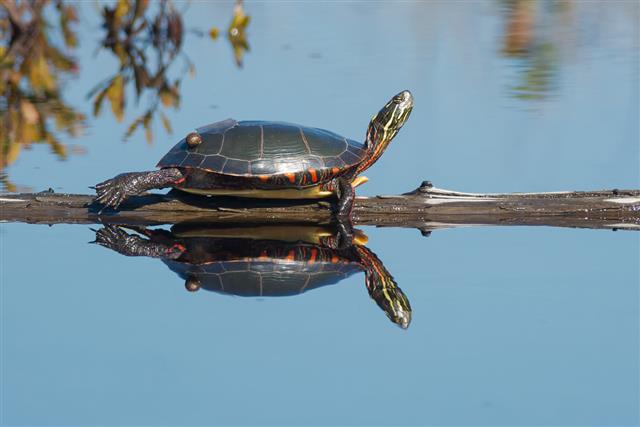 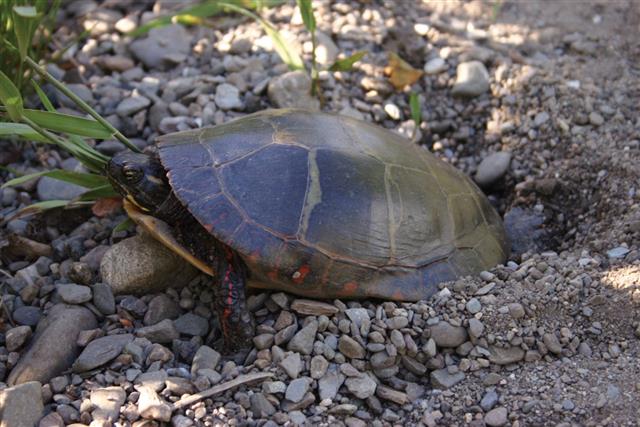 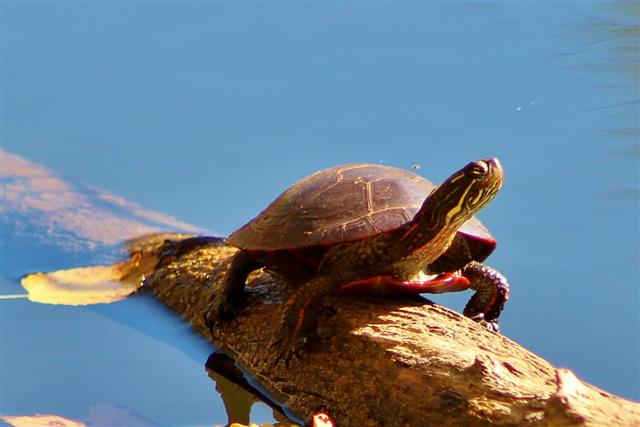 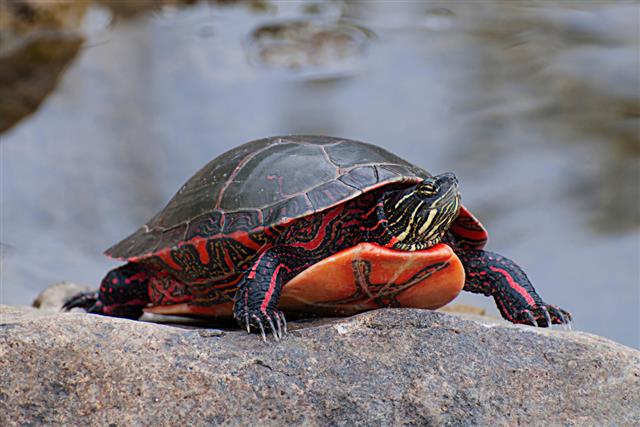 The painted turtle is also known as the Chrysemys picta or the painted terrapin turtle. It is an aquatic native of North America and one of the most common reptiles found in the wetlands there. It is also found in Canada and North Mexico, and is related to other turtles like the diamondback turtle, sliders, cooters, etc.

The painted turtle is a delicate reptile with an attractive and colorful shell. The maximum length of the shell is 25 cm. The background color of this turtle varies from green to black with red markings. The skin of a fully-grown turtle’s body, including the head, neck, margins of the shell, the feet, and tail, have red and yellow striped designs that give it the appearance of being hand painted. Hence, the name. The plastron or the underside of the turtle can be completely yellow or yellowish-orange in color depending on the sub-species. Most of the turtles have a yellowish underside with a dark pattern or an elaborate pattern of yellow, orange, red, and gray at the center. There are four subspecies of this creature, namely, the eastern painted turtle, the southern painted turtle, the western painted turtle, and the midland painted turtle, on the basis of the area of the nation that it comes from. It displays the typical characteristics of reptiles.

This turtle can always be found in or near water bodies like lakes, ponds, and marshes, but it prefers still or slow waters. It lives in the soft, muddy bottoms of these water bodies. Though it loves being in the water, it often basks in the sun on rocks or logs near the water. This helps it to get rid of parasites like leeches. It is active during the day but rests at night. It also hibernates in the winter by burying itself in the mud at the bottom of the pond or lake. When kept as a pet, creating the perfect water habitat is essential.

The painted turtle is omnivorous, meaning that it consumes a wide variety of aquatic animals as well as plants. When kept as a pet, it consumes commercial turtle food, but it is healthier to feed it a varied diet containing natural foods along with commercially available foods. Baby turtles usually feed on animal matter such as worms, small fish, larvae, beetles, maggots, etc. If you have a baby turtle as a pet, then make sure that you provide a diet that is low in fat and high in vitamin and mineral content. Also, the diet should have low phosphorus and salt content. For a fully-grown turtle, highly-nutritional plant matter should take up about half of the diet. Calcium-rich animal food should be given to the female turtle prior to egg-laying. A mature turtle requires a considerably less amount of feeding as compared to a smaller turtle, which requires feeding almost everyday.

This reptile cannot hear, but its sense of smell and sight is brilliant. It uses the sense of touch to communicate with others of its kind. This is especially observed while mating. It is a rare and beautiful sight, during which the male turtle swims to face the female. With his over-sized front claws, he tickles the cheeks of the female rapidly, in a vibratory manner and in case the female is receptive, she strokes the forelimbs of the courting male turtle. The breeding takes place once a year. A female painted turtle may lay about 4 to 15 eggs. Male turtles mature at the age of 3 to 5 years while the females take a longer time and mature by the time they are 6 to 10 years.

This turtle is always under the danger of predation from the time the eggs are laid, to throughout its adulthood. Raccoon, squirrels, chipmunks, skunks, foxes, beavers, etc., prey on turtle nests. As soon as the eggs hatch, the baby turtles are independent. These little creatures are eaten by rats, snakes, bullfrogs, big fish, and herons. Fully-grown turtles fall prey to bald eagles, hawks, alligators, etc. Aquatic turtles do not face these dangers as pets, but that does not mean they are completely safe. Human beings also pose many threats to turtles through habitat destruction, use of pesticides, vehicles on roadways, and intentional killing by anglers. A pet turtle needs utmost care, without which it will die prematurely. On being threatened, it may use various forms of defense like kicking, scratching, biting, and urinating.

The painted turtle’s life span can range between 15 to 25 years when in captivity and 5 to 10 years in the wild, with some specimens living even longer. Also, the mortality rate of the newly-hatched eggs is very high. Some of these turtles that have avoided predators and diseases have been known to live more than 30 years in the wild as well.

The painted turtle is a beautiful, colorful creature, which is an apt example of the beauty of nature. Steps must be taken to save this unique animal from disappearing from the face of this planet. 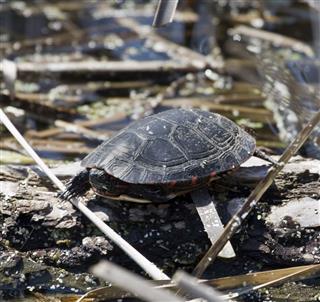 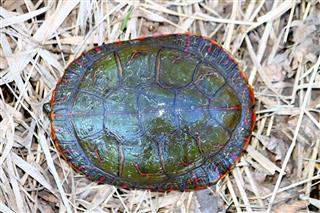 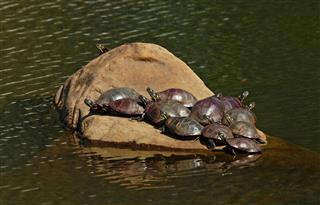