Oleander is a poisonous plant that affects both humans and animals. Pets require extra attention and care when it comes to protecting them from the same, which is why this DogAppy article brings you the effects of oleander poisoning in dogs, their symptoms, and the actions you need to take for its treatment.

Oleander is a poisonous plant that affects both humans and animals. Pets require extra attention and care when it comes to protecting them from the same, which is why this DogAppy article brings you the effects of oleander poisoning in dogs, their symptoms, and the actions you need to take for its treatment.

An oleander plant is very lethal, and consumption of just 20-30 of its leaves can put down a cow weighing 1500 lb.

Nerium oleander, commonly known as oleander, is a small shrub or tree in the dogbane family in Apocynaceae family. It grows indoors in cooler places and outdoors in warmer climates. The plant is known for its colorful appearance and aesthetic appeal, and is grown widely in homes, in greenhouses, and even to line the highways and freeways. Although it is said to contain some medicinal properties and is being tested for the same, its toxicity is a major cause for concern.

Oleander is one of the deadliest plants, when it comes to both humans and animals. And if you own pets, the level of concern increases tenfold. It is important to protect them and be aware of things that can harm them, and in the unfortunate event that they get affected, you should be quick on your feet and be able to gage what to do next. The two questions that are frequently asked are “What part of the oleander plant is poisonous?” and “How does the poison work?”. We address both factors below.

Identifying the Oleander Plant: Some Pictures 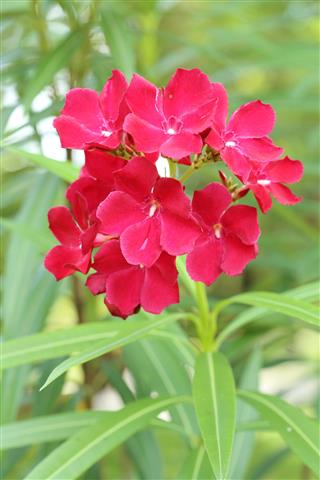 Oleanders: Toxicity and its Working

Because of its medicinal benefits, people tend to assume that not all parts of the plants are harmful, and sometimes are completely unaware of whether it’s even harmful at all. But contrary to common belief, the entire oleander, from the roots, to the branches, to the leaves, to the flowers, is poisonous. If you ever use an oleander stick in a bonfire, as a skewer or a fetching toy, you are asking for trouble, because the toxin stays in the plant irrespective of whether it is kept natural or burnt, because the latter doesn’t remove the toxin upon heating. The flowers are the least poisonous of all parts, but not completely free of the same. So you have to be careful because the toxins can affect you or the pet if it’s inhaled, ingested, or through topical contact also.

So how does it work, and affect us so drastically? We’ll tell you how.

We will now explain what reactions the plant causes, how to spot the symptoms in dogs, and how to treat the same.

If necessary precautions are not taken around your home, your dog is susceptible to coming in contact with and ingesting the harmful plant. This can happen by them unknowingly eating any part of the plant (due to hunger, boredom, or curiosity), by lapping water from a pool, which has come in contact with the plant (fallen leaves, twigs), by playing with the twigs or inhaling fumes of a burned part of the plant. The common indicators of this are:

The following are the more severe effects of the toxin:

As you can see, oleander toxins are very dangerous, and more often that not, by the time you get to the process of treatment, it is unfortunately too late. If you do notice these symptoms, it is paramount to take quick actions, like the ones we’ve mentioned below in order to avert the unwanted. The most common symptoms to look out for in dogs are vomiting, drooling, diarrhea, abdominal pain, and depression.

In the event that you observe any of the above, this is what you should do.

If your dog has only ingested a small amount, the prognosis will be more optimistic. In the event that the quantity consumed is larger, your pet might be in dire straits and may even face death. Nonetheless, what’s imperative is that you don’t give up and take the necessary steps and do your best to save your pet. These are the following measures you should take:

Despite these measures, if the toxins have taken over the cardiac system, death is a very swift process that follows. We would request you to not be disheartened, and follow the measures you need to take in the hope that your pet might be saved.

As the cliché goes, prevention is always better than cure, and the best way to protect your pet is by ensuring that the environment in which you raise your dog is devoid of harmful and risky objects, plants, or anything else that could negatively affect them. Take care.

Disclaimer: The information provided in this article is solely for educating the reader. It is not intended to be a substitute for the advice of a medical professional.