How to Identify and Treat Your Dog’s Tail Injury

When a dog injures its tail, there may be certain symptoms that are observable. However, there are times when you are unaware of the accident and there are no visible symptoms as well. In such cases, you need to observe and identify these on your own. This article helps you with the same, along with some information on the treatment of tail injuries in dogs.

When a dog injures its tail, there may be certain symptoms that are observable. However, there are times when you are unaware of the accident and there are no visible symptoms as well. In such cases, you need to observe and identify these on your own. This article helps you with the same, along with some information on the treatment of tail injuries in dogs.

The location of the tail injury is an important factor to consider before treating your dog. If the injury is close to the base of the tail, it requires immediate treatment. If left untreated, it may lead to incontinence.

Many are not aware of the fact that a dog’s tail is prone to getting injured very easily. This can occur due to various reasons. Some reasons are as simple as the dog itself repeatedly hitting its tail on hard surfaces, or its tail getting stepped on by someone. Its tail getting shut in doors or hit by a car may cause serious injuries. A tail that has been injured even once has the tendency to develop recurrent injuries, causing it to remain sore.

When your pet dog has injured its tail due to any of the various reasons, the symptoms may or may not be visible. This may also depend on the severity of the trauma. However, even if your pet does not show any symptoms, it is necessary to make sure that it is safe. An untreated injury may lead to complications.

Here are some of the observable signs that indicate a tail injury in dogs.

The line of action in treating a tail injury in dogs often depends on the cause of the injury and the damage it has caused to the dog. If the pet’s tail that has been scratched or bitten, it will cause hair loss and bleeding, while an injury caused by the tail being hit hard may cause mild to severe pain. A limp tail resulting from exertion will need rest, while a tail injury resulting from nerve damage will need prompt treatment.

Injured with scratches, loss of hair, and bleeding

➺ Sometimes you may not even know when your pet injured its tail. However, the presence of observable signs such as scratches, hair loss, along with bleeding on the tail will let you know.

➺ Clean the wound and apply a small amount of antiseptic on the wound. Immediate care and treatment by the vet is required if the case is severe (bleeding and severe hair or skin loss). Healing will depend on the severity of the wound. Also, if the condition is too severe, it may cause a lot of pain to your pet.

➺ In some cases, the vet may consider shortening the tail from the top as a treatment, which is believed to prove beneficial for your pet.

Injured from hitting on hard surfaces

➺ Some playful dogs tend to repeatedly hit their tail (in a fast manner) on hard surfaces such as a wall. This hard and quick hitting motion may give rise to an injury that results from the development of a bleeding ulcer at the tip of the dog’s tail.

➺ This type of injury is often recurrent and sometimes, amputation is the only treatment for it.

➺ This condition may occur in dogs due to various reasons such as if the tail is on the wrong side of a closing door, if it is hit by a car, when someone steps on it by mistake, or due to a fall in the wrong position.

➺ If the condition is not severe and the injury is at the end of the tail, it will heal gradually without the need of a cast. Even surgery would not be required in this case.

➺ However, if there is crushing or detachment of the tailbones, amputation may become necessary.

➺ In case of a broken tail or fractures, where there are no visible symptoms (like blood or bone visible) or pain, emergency care is not necessary. Observe the tail for any discoloration. You can then contact and visit the vet within 24 hours. Make sure that you pay attention to the dog’s tail till then.

➺ Once taken to the vet, he/she will examine your pet. Then the necessary treatment measures will have to be taken. Mostly, the pet will be administered medication to control the pain and a general anesthetic to reset or stabilize the broken tail. Once set, he/she may use a pet cone to avoid your pet from getting at its tail.

Note: One should not attempt to re-set the broken tail at home.

➺ This kind of injury may result from pulling of a pet’s tail. This pulling can have an effect on the nerves and muscles that are responsible for the movement of the tail. It can also affect the nerves controlling the urination and defecation process. An injury that involves nerve damage is also called avulsion injury. It can even have an effect on your pet’s ability to urinate or defecate.

➺ Functioning of the nerve may restore gradually, however, in the meanwhile you would have to take good care, as well as help and support your pet.

➺ In severe cases, taking your pet to the vet is essential as there may be a possibility of permanent loss of function as well.

➺ It is an injury that results from excessive exertion and is mostly noticed in sporting and working dogs. The causes may be excessive swimming (in very cold or very warm waters), heavy exercising, or any other strenuous activities. In this case, the tail goes completely limp. However, a completely limp tail can be a sign of dislocation as well.

➺ It is necessary to take your pet to the veterinarian for a checkup. This condition can be healed within a week, with the use of anti-inflammatory drugs and proper rest.

➺ The use of benadryl is often recommended by vets. This is usually for the cases wherein you need to reduce the wagging of your pet’s tail by making it feel sleepy.

➺ Gently clip away the hair that is covering the wound. This is necessary as bacteria may collect at the site. It is always better to use blunt scissors, however, electric clippers are also considered safe.

➺ In case of a minor injury, clean and wash the wound gently with an anti-bacterial soap (use a muzzle if needed). Remember that even minor wounds tend to bleed heavily. After cleaning the wound, apply an antiseptic ointment and then bandage it. Make sure that your pet does not chew off the bandage, for which you can use anything that tastes bad and apply it around the wound. If the wound appears to be serious or has got infected, you need to take your pet to the veterinarian.

➺ To avoid infection, clean the tail by dipping it in cold water for some time. This would help to rinse off the wound, stop the bleeding, and reduce any pain or swelling. Make sure that you dry the tail with a clean cloth.

➺ Instead of dipping its tail in cold water, the application of an ice cube may also prove beneficial to reduce the pain and swelling. Ice prevents the breakdown of cells that could lead to permanent damage.

➺ Once clean, apply an antibacterial ointment on the wounded area. It is always better to get a vet’s recommendation for the medication to be used. You can then apply a bandage to the tail so that it can heal. Also, pad the wound for protection and to prevent it from getting injured again.

➺ Injuries resulting from bites of other animals will require a rabies shot. In such cases, you need to visit the vet.

This information on the symptoms, causes, and treatment of tail injuries in dogs should prove beneficial for a pet owner in taking care of his dog. Remember that the location of the injury is also important as the one that is close to the base requires prompt treatment, while an injury at the tail tip is considered less serious. However, it is always better to take your pet to the vet to avoid any further complications. 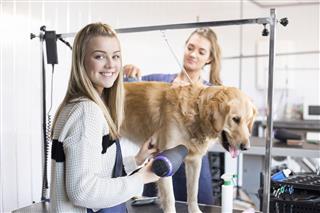 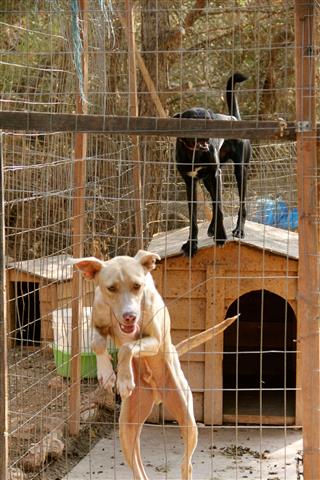