How to Care for Cherry Barb Fish

The cherry barb fish, native to Sri Lanka, is a popular choice of an aquarium pet. Its bright reddish color has an aesthetic appeal. This PetPonder article tells you all you need to know to care for cherry barb fish.

The cherry barb fish, native to Sri Lanka, is a popular choice of an aquarium pet. Its bright reddish color has an aesthetic appeal. This PetPonder article tells you all you need to know to care for cherry barb fish.

The cherry barb fish was given the scientific name Puntius titteya by Dr. Paules Edward Pieris Deraniyagala in 1929.

The cherry barb species is listed on the IUCN Red List of Threatened Species as Least Concern (LC), with a more specific designation of Lower Risk and conservation dependent (LR – cd). From 1988 to 1994, it was listed as Vulnerable (VU), but the status has been upgraded recently. These fish are native to the Kelani to Nilwala basins of Sri Lanka. They may also be found in Colombia and Mexico. They are usually found in heavily shaded streams and rivers as they prefer areas of slow-moving, shallow water with a bottom of silt littered with branches and leaf litter. They are commercially important in the aquarium industry, and are a popular choice of aquarium fish.

The cherry barb has an elongated and compressed body, which reaches almost 2 inches in length. On top, it is fawn-colored with a green-tinged luster, and its sides and belly show reddish-silver highlights. A brownish-black/bluish-black horizontal stripe extends from the tip of the snout, through the eye to the base of the caudal fin. It has a metallic top-edge that is golden towards the snout and changes to blue or sea-green towards the tail. The males are darker red in color as compared to the females, and become redder still during the mating season. In a group, the dominant male has the darkest and brightest color. The females are lighter in color and have yellowish fins. 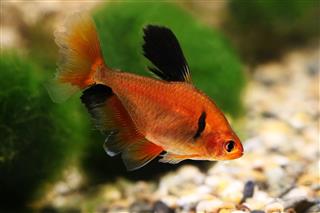 Setting Up a Cherry Barb Aquarium

How Do They Behave?

In a decent-sized school, they are less skittish and shy, and form a natural-looking display. Within a shoal, presence of more than one males will lead to the males competing with each other to set up a hierarchy. These displays rarely cause severe injury. The males “dance” in front of each other, instead of fighting, encircling each other with erect fins. They also develop a vivid color in the presence of other con-specific males. The cherry barb is a middle-tank species, but it also swims along the bottom as well as the surface in the aquarium.

They are very hardy fish, which live well with other non-aggressive fish. Some such docile fish include fish like Danio, Pleco, Betta, Corydora and Rainbow fish. Predatory and aggressive fish should be avoided.

What Do They Eat?

Since they are omnivorous, they eat almost anything. They can be fed flakes or fish feed pellets. Once in a while, feed them brine shrimp (live/frozen), plankton, or bloodworms as a treat. Ideally, they should be fed in several small feedings in a day. They should be fed at least once a day. When feeding, always offer enough amount of food that can be consumed in 3 – 5 minutes.

How Long Do They Live?

The average lifespan is 4 years, but they can live up to at least 7 years.

How Do They Reproduce?

Cherry barbs are egg-scattering species that do not show any form of parental care. They produce around 200 – 300 eggs that are deposited by scattering them on nearby plants. The adhesive and sticky nature of the eggs helps them attach to the plants. After the spawn, care should be taken to ensure that adults don’t eat the eggs. For this purpose, a separate breeding tank can be set up or modifications can be done to the existing tank. The breeding tank should be dimly lit with clumps of Java moss or spawning moss. If one wants to modify the existing tank, the base should be covered with a mesh of a large-enough grade so that the eggs fall through, but the adults cannot reach them. A layer of glass marbles will work just as well. Alternatively, filling most of the tank with spawning mops can also work.

The eggs hatch within 24 hours. The hatchlings are called fry, and can be fed infusoria, a liquid fry food, or newly hatched baby brine at least three times a day. One should not overfeed as it rapidly fouls the water. As the fry grow, they can be fed microworms.

What Diseases Can They Be Affected By?

Shoals of cherry barb fish are visually appealing, so make sure to have a sizable number in your tank. As long as proper living and feeding conditions are met, they will live longer and healthier.