A look at the interesting facts about hermit crabs allows you to get to know this fascinating creature intimately. This PetPonder post does the needful for you. 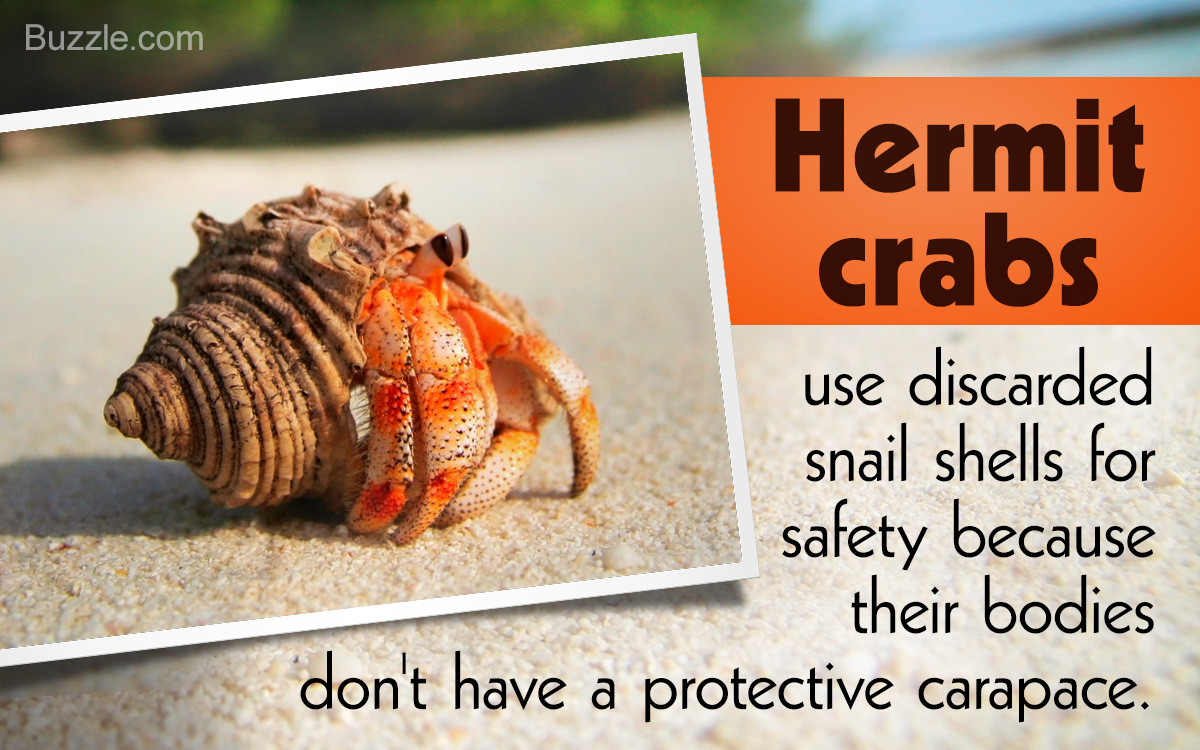 A look at the interesting facts about hermit crabs allows you to get to know this fascinating creature intimately. This PetPonder post does the needful for you.

Hermit crabs get their name from their tendency to live in ‘secondhand’ or previously owned and discarded shells.

All crabs of the families Paguridae and Coenobitidae are called hermit crabs. Despite their name, they are more closely-related to lobsters than crabs. There are in all about 1100 species of these crabs. Some are aquatic while some are terrestrial. Most species are nocturnal.

▽ The bodies of hermit crabs do not have a hard, protective carapace. They need a shell to protect themselves from predators, which is why they use discarded sea snail shells or other hollow objects like pieces of wood and stone. They move around dragging their shell with them, and retreat into it when threatened.

▽ Their front half has a hard exoskeleton, but it is the longish abdomen that is soft and most susceptible to injury. It can change shape to fit into a spiral snail shell. The crabs contract their longitudinal muscles and press the abdomen against the inner walls of the shell.

▽ These crabs have stalked eyes and a very good vision. They also have two pairs of antennae, one of which is used for feeling, while the other is used for smelling and tasting. They have a large left claw, which they use to grab onto things, to defend themselves, and to balance. The relatively smaller right claw and subsequent appendages are used in the process of collecting food and passing it to the mouth.

▽ One surprising fact about these crabs is that they molt, which basically means that as they grow, they shed their exoskeleton and grow a newer, bigger one. The shedding takes place when the buildup of water pressure in the crab’s body splits its old skin. Often, a crab will consume its molted skin to attain calcium, vitamins, and minerals.

▽ These crabs exist almost all over the world, except in the Arctic and Antarctica. They are common and widespread in northwestern Europe among other areas. They live in waters with sandy and muddy bottoms, and sometimes on land and in trees. They inhabit rocky and sandy areas. They live at various depths from areas near the shoreline to deep sea floors.

▽ As their distribution is very wide, they have been able to adapt to several different kinds of habitats. Though they are usually found in shallow waters, some even live in plant stems, while several species are found in kelp forests.

▽ While many of these crabs live on land, they all return to the water to procreate. Once in saltwater, they partially emerge from their shells to mate. The eggs are carried by the female in a mass attached to her abdomen. They are discharged into the sea from which larvae hatch and then go through life stages and molts. The three life stages that the eggs go through are the nauplius, protozoea, and zoea. They usually hatch at the zoea stage. Baby hermit crabs look a little like shrimp. On reaching adulthood, they find themselves a shell and resume life on land.

▽ The shell of the hermit crab is both its armor and home. As such, it is an intrinsic part of the crab’s life. Each shell is subjected to an investigation process before the crab moves in. Sometimes, a crab may select a new shell, but may find it uncomfortable after a while and move back into the old one. These crabs compete with each other for the best shells, and often fights break out. A group of crabs may even corner one crab that has a good shell, make it give the shell up, and then compete for its possession.

▽ There have also been instances of crabs passing on old shells to the smaller ones when they move into new homes. It has been observed that when a crab is about to change its shell, a large number of crabs line up according to size, and every subsequent crab takes over the shell that has been discarded by the crab in front of it. This is a very interesting phenomenon.

▽ As hermit crabs are scavengers, they like to eat fish, algae, seaweed, and some have even been seen eating fish poop. In captivity, they can be fed anything from fresh fruits and vegetables, to frozen shrimp, raisins, oatmeal, popcorn, crackers, dried seaweed, and foodstuff that are available at pet stores. These animals are not very picky eaters, and they eat almost anything that is given to them. While feeding them fruits and vegetables, make sure that they are unprocessed and do not contain preservatives as far as possible. Also, check the labels on the fish food that you purchase from the store for copper content, as too much of it can be harmful for your pet.

▽ These crabs are extremely social animals, often living in groups of hundreds. Those that live in the sea (sometimes referred to as saltwater hermit crabs) often provide lifts to sea anemones on their shells, and consequently develop a mutualistic relationship with the house guest. The anemone usually lives on the crab’s shell and may play a role in protecting it by using its stinging tentacles and providing camouflage. There are occasions where the crab and anemone form a strong bond, due to which the crab will take the anemone with it when it changes its shell. Sometimes, the crab will allow a ragworm to live inside the shell with it.

▽ These crabs are commonly kept as pets. Due to their social nature, many breeders try to encourage buyers to buy a number of crabs instead of just one at a time. These animals keep the aquarium clean by feeding on the algae and other debris inside it. Although there is a popular belief that they do not live for very long, some species can survive for as long as 30 years if they are looked after well. Their aquarium or terrarium should be made of glass and have a lid. A terrarium of 10-gallon capacity is enough for a few crabs.

▽ It requires a temperature between 80 to 85°F to be maintained with a 60% to 70% humidity. Place a bowl of slightly warm, chlorine-free water inside it for the same. Clean the tank on a weekly basis, and discard all the uneaten food as it can rot due to humidity in the tank. A sand and earth substrate should be provided to your pets. They should be able to bury themselves in it completely, which they do while molting. Thus, decide the depth of the substrate depending on the size of your crab. It should be replaced every few months when it begins to go bad and starts becoming moldy.

Hermit crabs are very fascinating creatures to observe. Although they make good pets, they do better in the wild rather than in a glass box because of their unique lifestyle.