Guinea pigs are related to hamsters and mice, and are equally popular as pets. Read on for some interesting facts about these cute, cuddly animals. 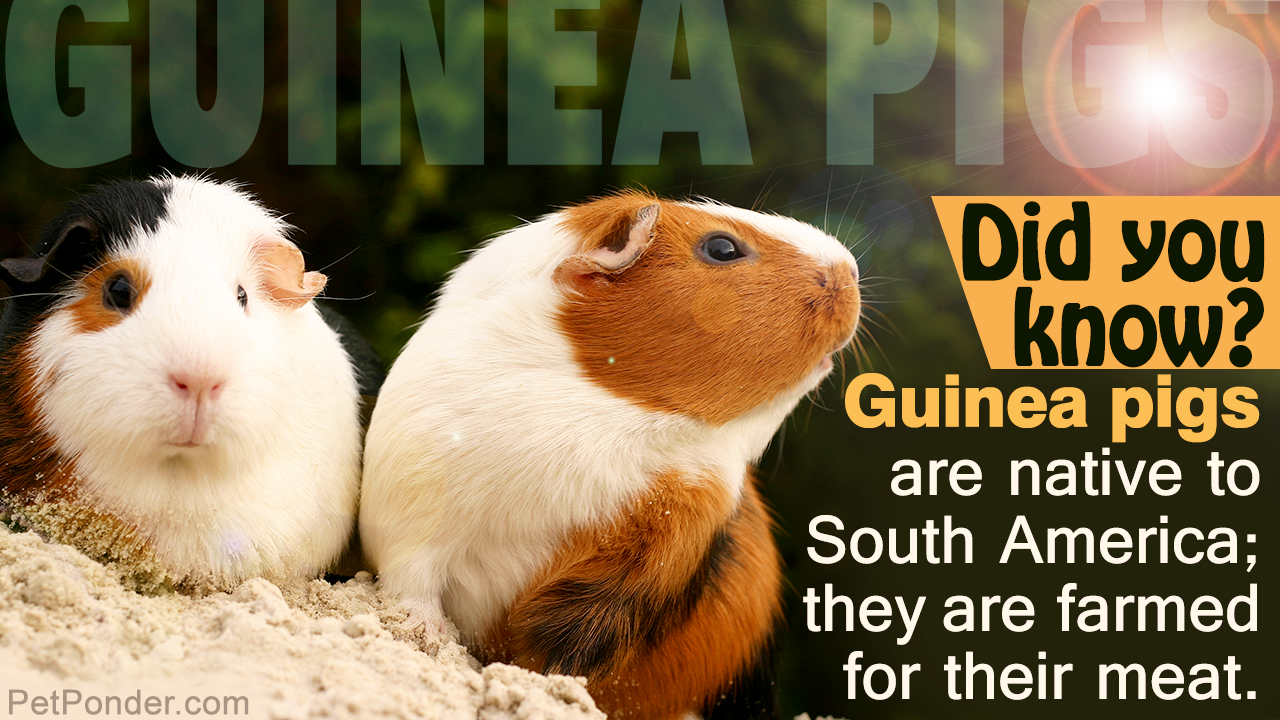 Guinea pigs are related to hamsters and mice, and are equally popular as pets. Read on for some interesting facts about these cute, cuddly animals.

What’s In A Name?

Despite their name, guinea pigs are neither pigs, nor from Guinea. Guinea pigs are rodents, like rats and mice, and they originated in South America.

Guinea pigs are rodents, an order they share with rats, mice, hamsters, squirrels, and porcupines. Although they are classified in different families, guinea pigs superficially resemble hamsters more than members of their own family. 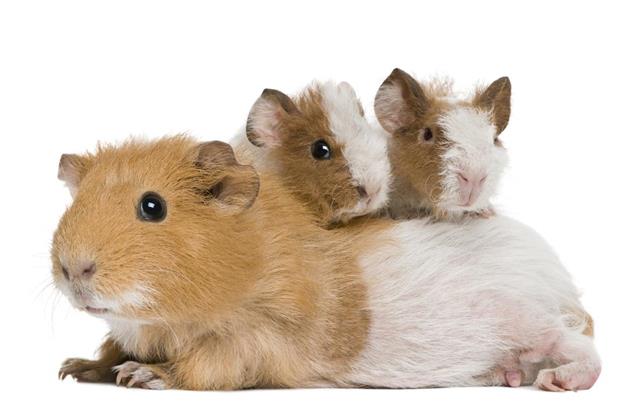 Guinea pigs are popular as pets, due to their cuddly appearance and temperate, affectionate behavior. If conditioned correctly, guinea pigs can be adorable pets.

In the 20th century, they were the most commonly used lab animal, giving rise to the popular phrase ‘guinea pig’ for anyone subjected to an experiment. Although they are still used as lab animals, they have largely been replaced by mice and rats.

Guinea pigs are classified under the genus Cavia. There are nine species of guinea pigs, although three of them are generally considered synonyms of another three species. The domestic species, which typifies guinea pigs in the Western world, is named Cavia porcellus.

Due to the name of their genus, Cavia, guinea pigs are called cavy.

Guinea pigs have a large head, small ears, short legs, and a small, plump body. They can be uniformly black, brown, maroon, white or any combination of those colors. Although they are large compared to other rodents, they are quite lightweight: adults usually weigh less than 2.5 lbs, and grow up to 10 inches. They may live for 7-8 years, though 4-5 is the average.

Guinea pigs are crepuscular, i.e., most active during dusk and dawn. This maximizes their chances of avoiding predators.

The need to maximize their chances against predators has also had an effect on the birth of guinea pigs. Unlike other rodents, whose litters are born without fur and with eyes shut, a young guinea pig is born with hair, functioning eyesight, is able to run when it is only three hours old, and can feed on solid foods within days, sometimes hours.

They are herd animals. They live in large groups that are led by a dominant boar. The dominant boar is the only male that is allowed to breed with the sows. This must be taken into consideration if you want to have a group of guinea pigs as pet. They may look cute and cuddly — they are — but fights between rival males can get bloody. If the two males have been introduced to each other since an early age, they are more likely to tolerate and even fraternize with each other.

Since they are naturally programmed to live in groups, a lone guinea pig can become incredibly depressed. If the owner can’t provide sufficient companionship, lone guinea pigs can easily get stressed, and may even bite or scratch otherwise familiar people. 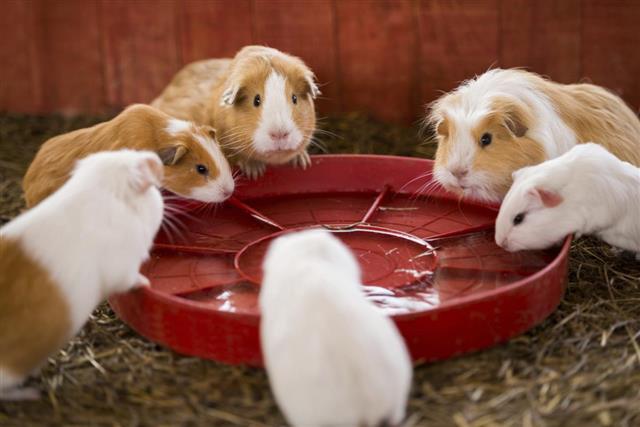 On the other hand, a loyal owner will be repaid in full by these affectionate animals. Once they trust their owner, they like being petted, and may even fall asleep on their owner’s lap. 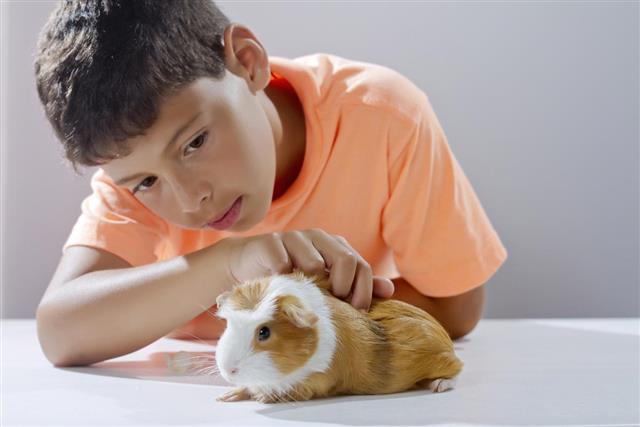 Wild guinea pigs mainly eat grass and hence are mostly found on the grassy plains. Usually, grass-eating animals have a long digestive tract, which is required to digest cellulose. Guinea pigs are no exception; they have one of the longest colons of rodents.

The domesticated species of guinea pigs, C. porcellus, is no longer found in the wild. It is entirely dependent on humans for its survival. Like its wild relative, it too requires copious amounts of grass as its staple diet. 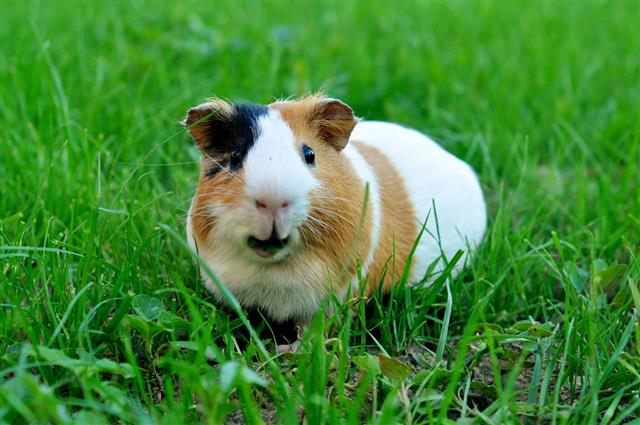 These animals have a good sense of smell, hearing and sound. However, their eyesight is a bit weak.

Like all rodents, they have incisors which continue to grow throughout their life. These teeth wear off at their tips and develop a chisel-like edge that is used for gnawing. If sufficient diet is not provided, guinea pigs may resort to gnawing on their own hair, in order to prevent the development of an overbite.

They are herbivorous animals and do not produce Vitamin C in their body, so they must be given fresh fruits and vegetables to eat.

Guinea pigs don’t dig burrows. They may live in burrows made by other animals, or among vegetation.

Guinea pigs are perfectly suited for the urban household — they are clean, not malodorous, and comfortable around humans. Also, they are very timid and generally don’t venture outside familiar territory. This makes them better pets than any other rodents. They are fussy eaters, though. Once a guinea pig has developed the habit of a particular food, he will stick to it no matter what the alternative. 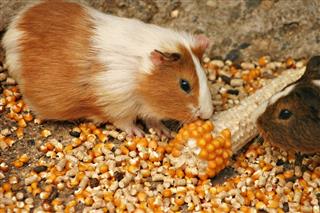 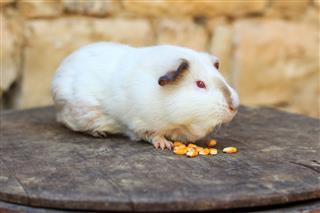 Guinea pigs can be delightful pets. They learn to recognize their owners, and then loyally develop social bonds with them. Although they can’t jump, they exhibit a behavior known as ‘popcorning’. When excited, they hop on the spot, and run around in circles — unarguably a hilarious and adorable scene! For such a tiny animal, they hold a very important place in South American folklore, cuisine, and traditional medicine.