What You Should Know About the Cute Little Roborovski Hamsters 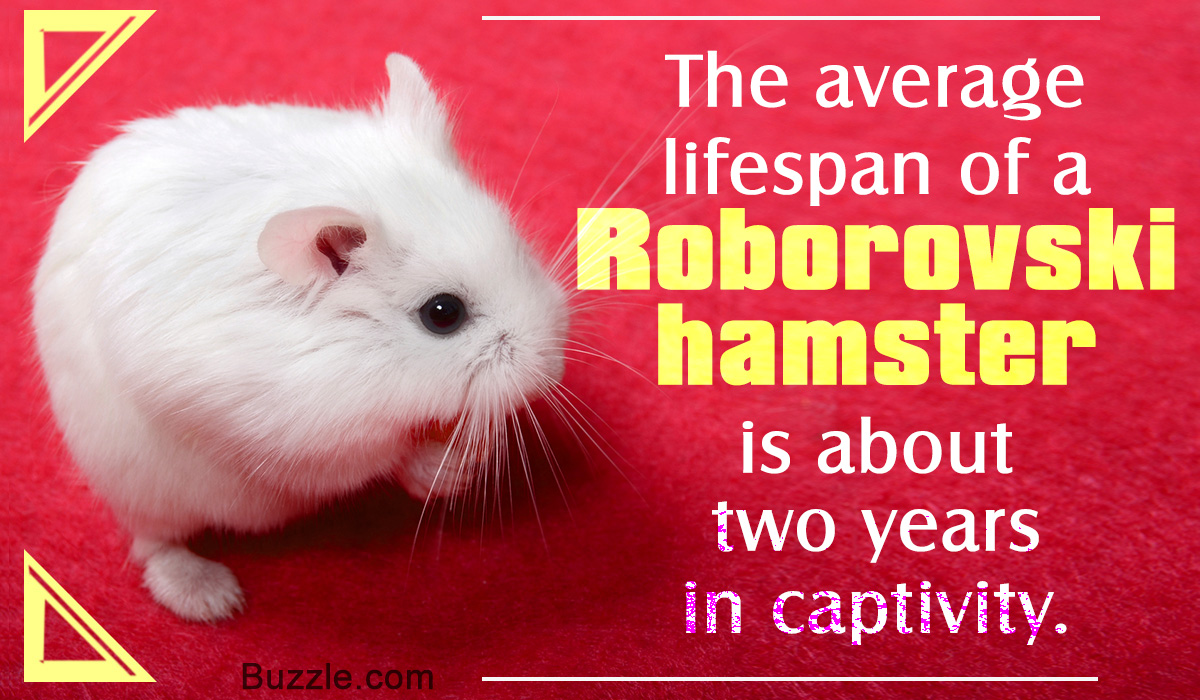 Though Roborovski hamsters are found commonly in pet shops in many countries, they were first imported from Russia to the U.K. in the 1960s, and the U.S. in 1998.

Roborovski hamsters, or simply Robos/Robs/Robo Dwarf Hamsters, are the smallest species of dwarf hamsters found in the world. Known scientifically as Phodopus roborovskii, these cute-looking rodents are found primarily in the desert regions of Xinjiang, China; Tuva, Mongolia; and the basin of lake Zaysan, Kazakhstan. The species was first discovered in the July of 1894, by the Russian expeditioner Lt. Vsevolod Roborovski, after whom it has been named. However, their detailed scientific study was carried out only in the first decade of the 20th century. Let us take a look at some Roborovski hamster facts that are worth knowing, especially if you intend to keep one as a pet.

➜ As mentioned before, Roborovski hamsters are the smallest of all known dwarf hamsters. A fully grown adult measures only about two inches in length, and does not weigh more than 20 to 25 grams.

➜ On the other hand, on an average, a newborn Roborovski hamster measures only about one inch long.

➜ One of the most distinguishing features of these hamsters is that they possess white eyebrow-like spots over their eyes. None of the other species of dwarf hamsters have these.

➜ Moreover, the natural color of their fur is grayish-brown with white underside; however, several variations have also been found.

➜ Another noteworthy feature of Roborovski hamsters is that these rodents do not possess a dark-shaded dorsal stripe that all the other species belonging to the Phodopus genus have.

➜ The lifespan of these hamsters, like most other species, is dependent largely on the living conditions. However, in the wild, they are known to live to about two years. Moreover, on an average, their lifespan in captivity is known to be not more than four years.

➜ Because they are found in and near the desert regions (as mentioned above), Roborovski hamsters are also known as desert hamsters.

➜ These rodents are generally known to inhabit elevated regions, and have been found at an altitude as high as 1,450 meters.

➜ Like most other rodent species, Roborovski hamsters dig their own burrows under the ground. Some of these burrows have been known to be as deep as six feet.

➜ These dwarf hamsters are crepuscular in nature―animals that are most active during twilight (at dawn and dusk). This means that they come out of their burrows during twilight.

➜ During winter, the Roborovski hamsters do not come overground, and stay in their burrows. Their inherent trait of stockpiling food during the warmer months, makes their survival possible during winter.

➜ Roborovski hamsters are omnivorous in nature, which means that, they feed on all sorts of food sources to derive their energy.

➜ Their diet primarily consists of grains, vegetables and fruits, plants, meat, and even insects.

➜ Roborovski hamsters reach their sexual maturity about five weeks after their birth; however, they generally are not known to breed unless they are at least five months old.

➜ If you intend to keep them as pets, do not mate the females until they are at least four months old, to ensure safety.

➜ On an average, the gestation period ranges between 22 to 30 days, after which, the pups are born.

➜ The litter is known to be small in size, and mostly do not have more than six pups. However, some litters with 10 pups have also been reported.

➜ Roborovski hamster owners should note that if you own a female, it is not advisable to handle her when she is at the peak of her pregnancy. Females are often known to be aggressive during this time, and may bite the owner if handled carelessly.

How to Take Care of a Roborovski Hamster

Roborovski hamster in a child's hand; note its tiny size

➜ If you wish to keep a Roborovski hamster as a pet, the first thing you should consider is to provide it with suitable housing. A glass or plastic aquarium, at least three feet long would suffice.

➜ Place a safe wire mesh on top of the aquarium, and make sure that it is secure enough. This is important as the Roborovski hamster is fairly small and can escape from a larger opening.

➜ Equip your hamster’s home with a variety of toys and a suitable layered bedding so that it can have a burrowing and hiding experience.

➜ Place water and food at different spots throughout the aquarium as these hamsters are highly active, and love running around all over the place.

➜ Provide them with fortified pellets for main diet as seed mixtures may lead to unnatural weight gain, which may harm their health.

➜ See to it a that you have marked out a play area for your hamster beyond the cage. A large storage bin can be a good alternative.

➜ Once you have arranged for all these things, you can go for getting your pet home. Leave it alone for about four to five days after bringing it home so that it gets acquainted with its new habitat. You can then start interacting with it slowly, and only when you are absolutely sure that the pet is not scared of you, can you start handling it.

➜ Make sure you get your Roborovski hamster from a reputed local pet store or from a certified breeder. It is advisable to avoid purchasing one online.

➜ Ensure that the hamster you choose is active and energetic, and has erect ears and clear eyes. Moreover, it should have a completely dry fur. If, around the hamster’s rump, there is a wet fur, do not choose it. Wet fur around the rump may be an indication of wet tail disease, one of the serious intestinal diseases in hamsters.

➜ It is also important to know that identifying gender amongst Roborovski hamsters is often difficult, and so, get your pet from a breeder who guarantees the gender of a hamster you are buying.

➜ Make sure that you provide fresh food and water daily to your pet. Also, offer some treats from time to time.

➜ Clean the hamster’s habitat on a regular basis, and also its bedding and toys.

➜ Finally, if you own any larger household pets such as cats or dogs, be absolutely sure that they are always kept at a safe distance from the hamster to avoid the rodent getting stressed, and eventually falling ill.

Roborovski hamsters are rarely known to bite; however, it is vital that the owners ensure that they don’t do things which would agitate the hamsters. Moreover, owing to the fact that they live deep inside burrows, light often disturbs them. Therefore, it is advisable to put on minimum light in the room where they have been kept. It is worth noting that Roborovski hamsters cannot see red light; therefore putting one near the hamster’s cage is highly recommended (in case the owner needs light there) so that they are not disturbed.