The green tree frog is remarkable for its vibrant skin coloration, large toe pads, and other adaptive features. Learning some facts about the green tree frog is definitely a fascinating topic for zoologists and animal lovers all across the globe. If you are interested in the same, keep reading this article... 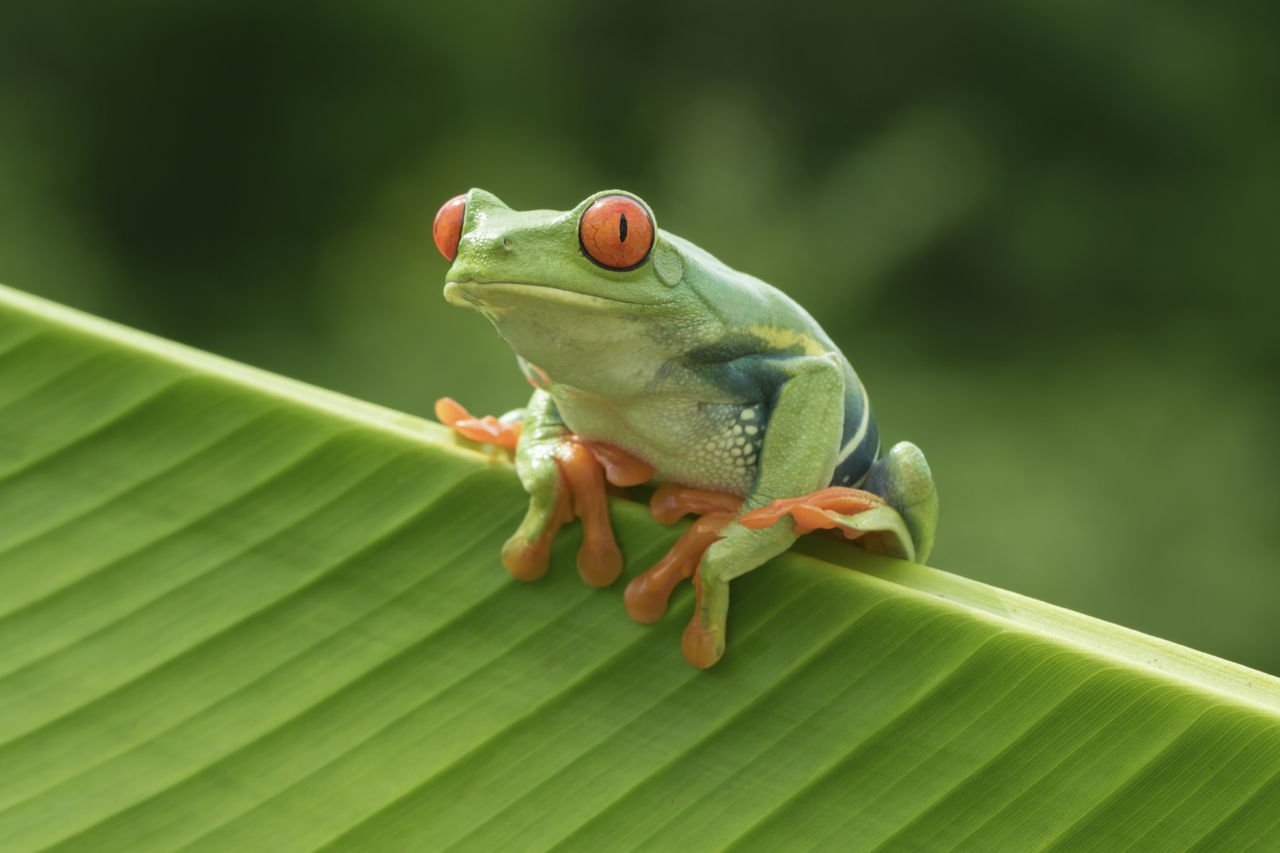 The green tree frog is remarkable for its vibrant skin coloration, large toe pads, and other adaptive features. Learning some facts about the green tree frog is definitely a fascinating topic for zoologists and animal lovers all across the globe. If you are interested in the same, keep reading this article… 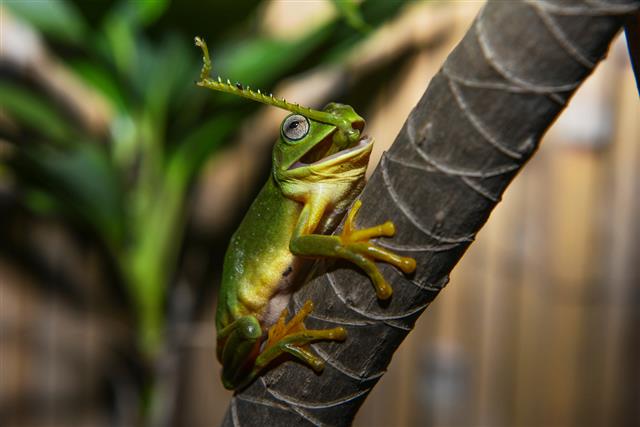 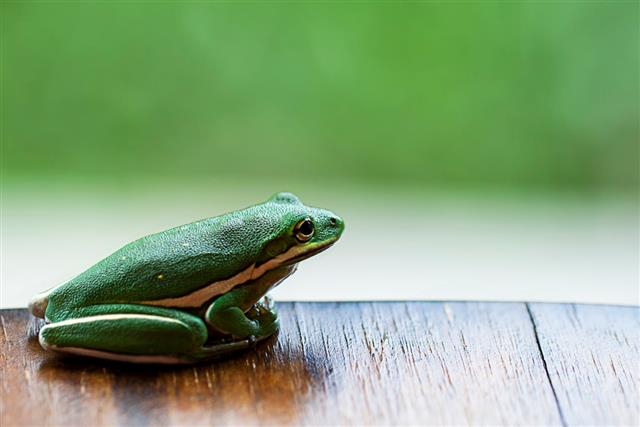 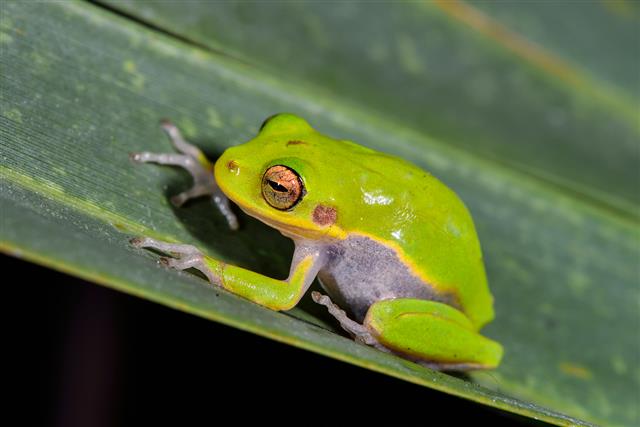 Known for its adorable color and behavioral traits, the green tree frog is known to most of us. Believe it or not, this frog species can jump to about 8 feet and more in a single leap. This is an adaptation to defend itself from predators. Officially relegated as the state amphibian of Louisiana and Georgia, today this vibrant colored frog is gaining popularity as a house pet too. If you are fascinated with this attractive frog and are planning to keep one as a house pet, then the following info will interest you.

Skin color of the American green tree frog is lime green to dark olive in color. In majority of this frog population, a cream or whitish colored line runs downward from the jaw to the thigh. But, you will also come across a few of them without this colored line. Another identifiable trait of this frog is its large toe pads that help it stick to smooth surfaces.

Being an amphibian, it can live both in land and water. This tree frog is mainly spread in central and south-eastern parts of the United States. In the natural habitat, you will find it in swampy areas, wetlands, marshes, grasslands, and large trees near water sources. Many times, the green tree frog is found near porch lights and other light sources in urban areas, waiting for its prey.

As with most amphibians, it is nocturnal in habit, i.e. active at nighttime. The name itself suggests that the green tree frog is arboreal and prefers to spend most of its time resting on the branches of trees. The big toe pads and large fingers help it climbing trees. During daytime, it is inactive and rests lazily in the palm fronds and areas, where it remains invisible to its predators.

This frog is a truly carnivorous species and maximum of its food comprises insects and worms. In fact, this frog is a voracious eater and preys on any small creature, which it can catch easily and swallow. Included in the list of foods for green tree frog are houseflies, fruit flies, moths, crickets, etc. When kept as pets, it requires nutrient supplementation to maintain optimal health.

The natural predators of these frogs are Cuban tree frog, birds, lizards, and snakes. One of the interesting Australian green tree frog facts is, it screams and makes unusual sounds to ward off its prospective predators. While this is not applicable to the American green tree frog, its skin color and ability to leap a longer distance are the best adaptive features to escape from other animals.

Breeding begins around mid April and lasts throughout the rainy season, i.e. about four months. The adult male makes croaking noises (about 75 calls per minute) to attract its female partner. After mating, the female lays approximately 400 eggs or more in slow running water bodies. However, in case of non availability, eggs are laid in stagnant water bodies. The eggs require about 9 weeks to develop into mature frogs.

The American green tree frog is a common pet, especially for those who love to keep exotic pets at home. Its popularity is also credited to its manageable body size, simple care level, docile nature, and most importantly, its fascinating external features. With this amphibian species, you don’t have to make arrangements for terrarium heating, which is required with other amphibian pets. As the diet is versatile, pet owners have an easy time in feeding this frog in captivity.

The lifespan of the American green tree frog is about 6 years, when kept in captivity. In the wild, lifespan is relatively shorter (2 – 3 years), as population is greatly influenced by water pollution and predators. Despite significant loss in habitat, the total population of this frog remains nearly unaffected and you can find it abundantly in the natural habitat. Hence, it is listed in the IUCN data for least concern species. 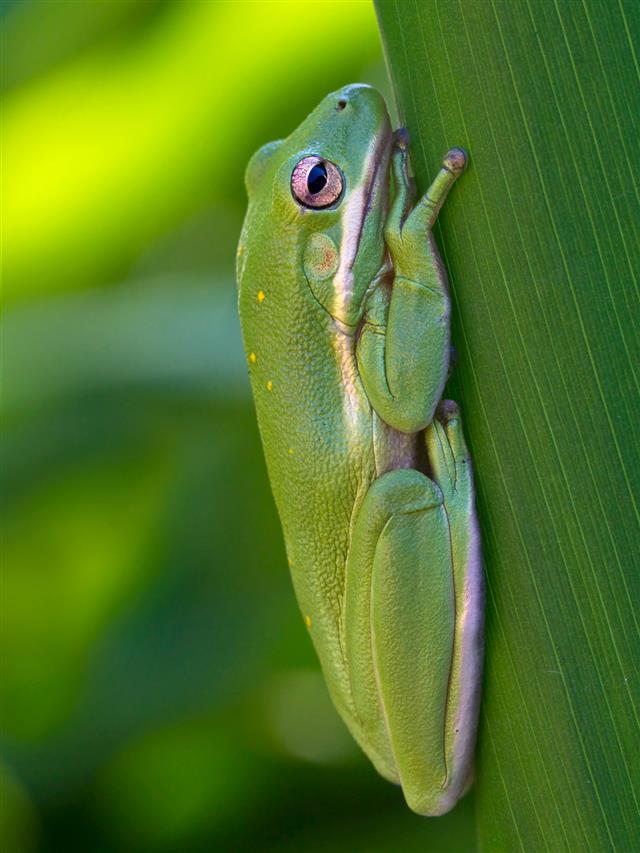 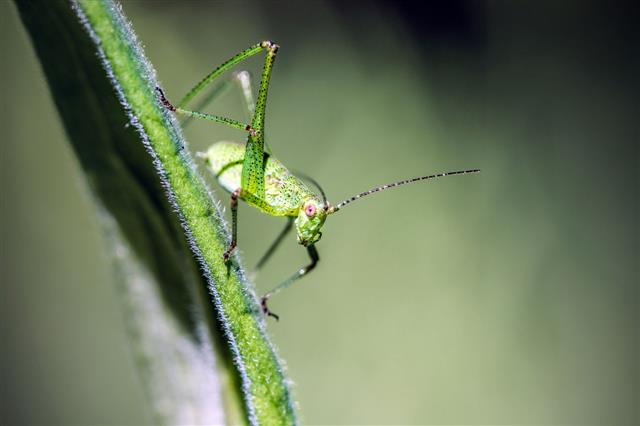 What Do Tree Frogs Eat
What Do Salamanders Eat? Well, Their Diet is Unusually Varied
These 5 Types of Tree Frogs Make for Excellent Pets