There's so much misinformation out there about ferrets, and it's gotten so bad that they've been banned in several states and cities because of it! Let's uncover the truth... 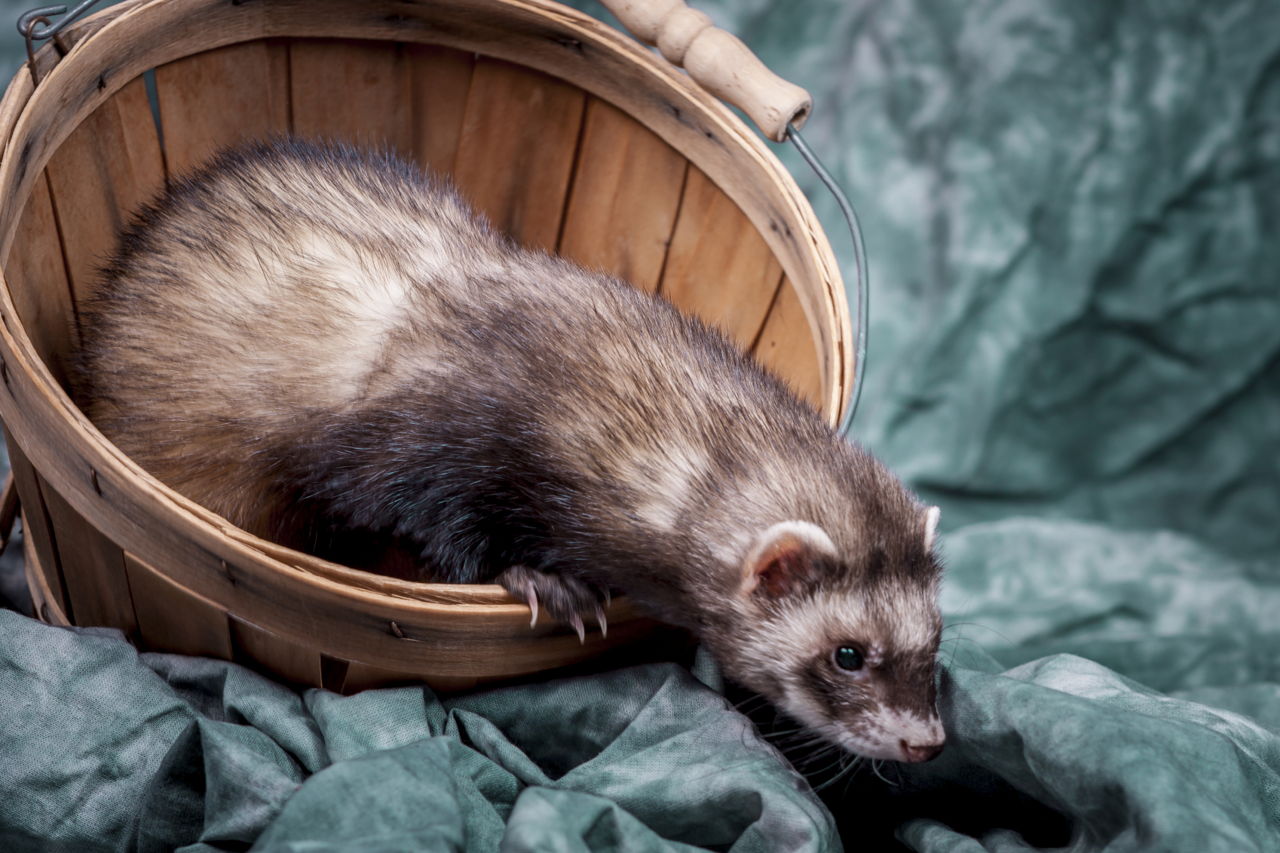 There’s so much misinformation out there about ferrets, and it’s gotten so bad that they’ve been banned in several states and cities because of it! Let’s uncover the truth… 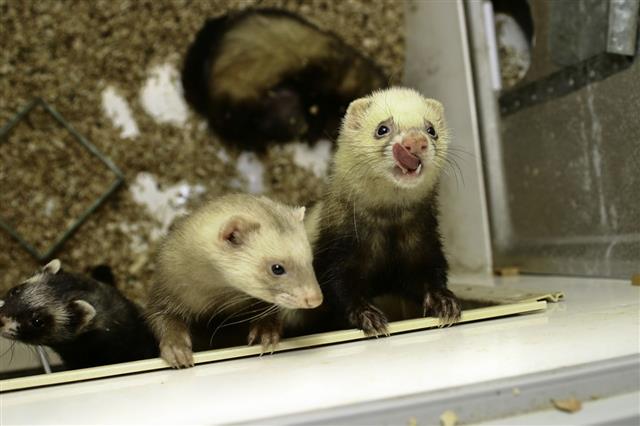 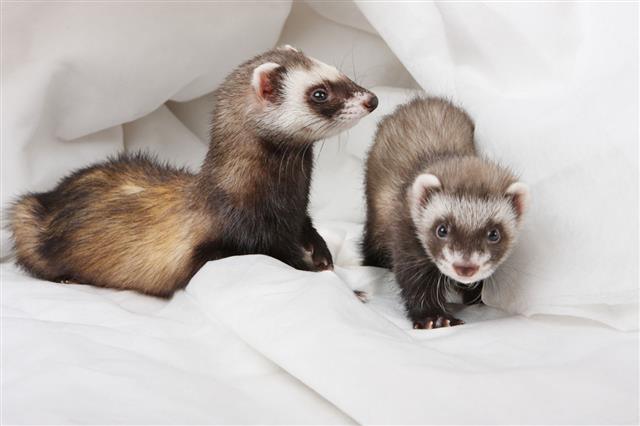 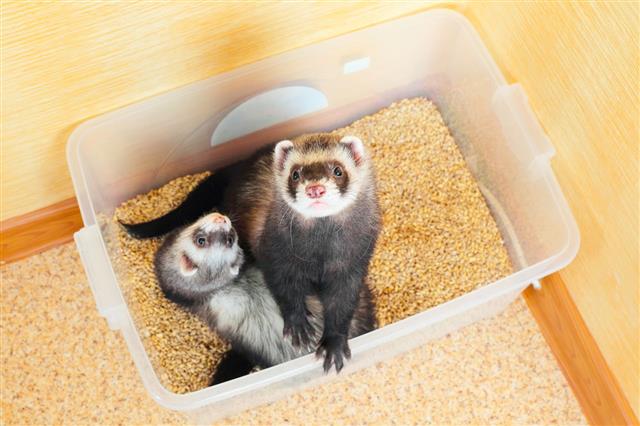 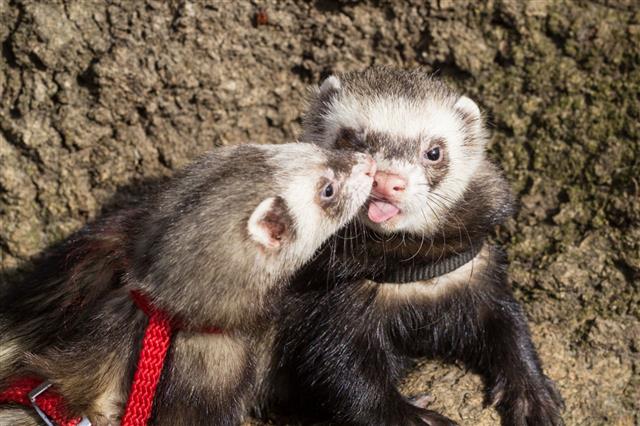 I’ll admit, I used to believe some of the rumors: ferrets stink, they’re mean, they’re destructive. These myths and lies have become so ingrained in the minds of many Americans that in the state of California and New York City, keeping a ferret as a pet is illegal. Both bans are the result of persistent myths that continue despite well-reasoned arguments by pet owners and advocates calling for their repeal. These myths, among others, need to be called out for what they are―lies!

Okay, let’s get one thing straight―ferrets can stink. They have a musk, just like their other cousins in the Mustelidae (weasel) family, like the polecat, mink, and badger. So, if you stick your nose right up to a ferret, it probably won’t smell the greatest. Complaints about ferrets stinking up someone’s home, however, are not the ferret’s fault.

The reason ferrets get smelly is largely due to improper care on the part of the owner. The owner is either
a) not cleaning their cage, bedding, and litter box frequently enough, including scooping said litter box once or twice a day,
or
b) feeding their ferret low-quality food, such as Marshall’s brand, that contains fish products, which increase the quantity of poops as well as causing more oil production on the ferret’s skin,
or
c) bathing the ferret more than once every couple of months in an attempt to rid it of its natural scent, thereby drying out its skin and causing it to overproduce the oils that cause the stench in the first place.

Oh, and don’t forget the all the above option!

There is, of course, the fact that many people are only exposed to ferrets when they visit a pet store. These ferrets are always fed Marshall’s food, not only because it’s cheapest, but because the vast majority of the time if a ferret is in a pet store, it comes from Marshall Farms in upstate New York. It’s not that the food is super bad for them, but the fish products in it make them smell worse.

So, while I can understand where this myth comes from, I’d like to come out here now and state that, no, not all ferrets smell terrible. If a ferret’s cage is kept clean, their bedding laundered a couple times a week, and their box scooped at least once a day, not to mention they are kept on a good, quality kibble, they will not stink up your whole house.

#2 – Ferrets are vicious, they bite, they’ll give you rabies, etc.

Ferrets are not vicious. In fact, if they ever do bite, it’s usually a playful, puppy-like nip, and you should learn to discipline them appropriately (more on that in another article). As far as rabies and other diseases go, no human has ever contracted rabies via a ferret. In fact, there have only been 12 confirmed cases of rabies in ferrets since 1958. Not only are they naturally resistant to it, but it’s generally unlikely they’ll be exposed to it anyway if you keep your pet indoors and you supervise them outdoors.

So, why do you still have to vaccinate them? To put it bluntly, for liability purposes. If your ferret were to bite someone and they weren’t vaccinated, despite the fact that ferrets are supposed to be quarantined for 10 days like cats and dogs, many cities will simply euthanize them anyway.

This is the argument California used to ban them, and it’s been pretty well proven that they do not. The domestic ferret is just that: a domesticated descendant of the European polecat that has never been able to establish a feral population in the United States. They have been domesticated for over 2,000 years, were used by the Romans for hunting small game, and will usually die within a week if released outside to fend for themselves. In addition, nearly all pet ferrets in the United States are spayed and neutered. Unaltered female ferrets will die if they aren’t bred or given artificial hormones to prevent them from entering heat, and unaltered male ferrets simply don’t make as pleasant of pets as neutered males because they can be mean.

Thus, it is simply impossible for spayed and neutered domestic ferrets to establish a feral population in California, an environment for which even their wild ancestors were entirely unfit, and they most certainly can’t handle after thousands of generations of dependence on humans.

First off, no, ferrets are weasels. They are obligate carnivores, meaning they eat meat and nothing but.

Second, rabbits are not rodents. They are lagomorphs. There is a difference.

While some small breeds, like terriers, might still have an instinct to hunt ferrets, if you introduce them slowly and don’t let them interact when they’re alone, you should be okay. Larger breeds can also become accustomed to having a ferret friend around, although if your dog is a hunter, it might be a little tricky. I’m no dog expert, but my opinion is that every dog is an individual and should be treated as such.

As for cats, most cats won’t see anything larger than a mouse as prey, especially if they are indoor only cats (as they should be if you want your cat to remain healthy). My cats actually play with my ferrets, and many ferret owners find their cats and ferrets become good friends. I think of my cat Wesley as being more ‘frenemies’ with the ferrets, though, he wants to play with them, but they don’t really ‘get’ each other. It’s rather amusing.

#6 – I can’t have a ferret, I have a rabbit/guinea pigs/chinchillas and the ferret would eat them.

Most domestic ferrets won’t see your small critters as prey unless that’s what they are taught – but it’s best not to chance it. I tried letting my first ferret out while the bunnies, pigs, and chins were caged, but the bunnies threw a bit of a thumping fit. Then, I tried blocking off half of our living room to let her out in a space away from the other critters. It didn’t work too well – she consistently found ways out of my playpen-turned-fence, no matter what I did. Eventually, I moved her in to our computer room/office, which she now only has to share with ferret number two.

So, if you want a ferret (or two or three) and you have other critters, it’s best that you have them in a room away from them. I find the computer room to be a great place, because unlike rabbits, ferrets actually dislike Bitter Apple spray and will stay away from any cords I’m unable to conceal. Bunnies think the stuff tastes great, somehow.

The last myth I’ll address is a doozy…

Wrong. Ferrets make GREAT pets! I think of ferrets as a best-of-several-worlds type of pet – they are litter trainable, and sleep most of the day like cats, but then they are exuberant, energetic, and playful like a puppy when they’re awake. When you’re away or asleep, you can send them home into a comfy cage like a rabbit or chinchilla where you don’t need to worry about their safety (or that of your belongings). Best of all, they are incredibly affectionate. You’ll be hooked once you get your first little lick on the cheek, trust me!

While some people may never like ferrets, I hope someday more folks will realize their dislike was based on myths rather than facts. I’ve already found one convert in my boyfriend, who now loves our two fuzzies, even though he once said he really didn’t like them at all, thinking they were smelly! Once he met our girl Kira, though, she ‘weaseled’ her way into his heart, and now we couldn’t imagine life being as fun without her. 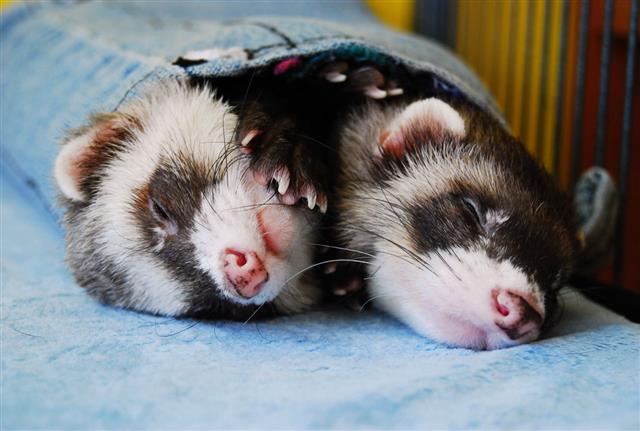