Facts Worth Knowing About Freshwater Stingrays 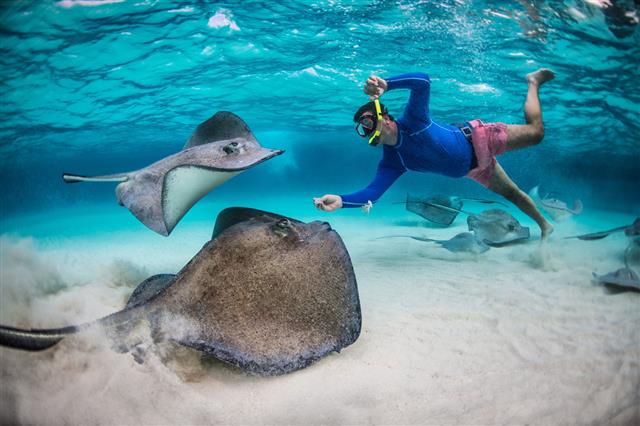 The giant freshwater stingray is a big fish. By big, we mean gigantic. You can sleep across its fins quite easily; not really a good idea, but you can―that’s how expansive they are. One very interesting fact about this fish is how it got its name. This species was supposedly discovered by Pieter Bleeker in 1852. He was an ichthyologist, a studier of fish. The basis of his study was a young stingray, who had a fin length of 12 inches. He named the species polylepis. However, this study never became very popular.

In 1990, another study was conducted and published by Tyson Roberts and Supap Monkolprasit. This time, the duo gave the species another scientific name, that of Himantura chaophraya. Later, research confirmed that this species was actually the same as polylepis, and hence, its scientific name was adopted as Himantura polylepis. Its Thai name is Pla kabeng nam djut. It is one of the largest fish in the world. PetPonder provides some more interesting facts below.

✦ As mentioned before, this is a really big fish. Its tail can grow as long as 15 inches (40 cm), and its fins as long as 6.2 feet (2 meters) wide and 16 feet (5 meters) long. The long tail is poisonous, and has the capacity to penetrate the human skin and bone!

✦ It has two small eyes on the top, that are spaced apart from each other. Its mouth is small and slightly-arched, and the teeth are small and rounded. It has five sets of gills on its fins. The color of this fish is grayish-brown on the fins, with white undersides.

✦ With such a huge size, its weight can’t be far behind. Some of the largest specimens caught weigh between 1,100 to 1,300 pounds.

✦ In the wild, the giant freshwater stingray inhabits freshwater areas such as rivers and estuaries. However, as this fish is not that easy to spot, catch, and study, not much is known about its habitat.

✦ It prefers areas that have sandy or gravelly bottoms, as it likes to hide under this layer, waiting for its next meal. It can breathe through special spiracles on the top of its fins.

✦ Geographically, this fish is found in Borneo, New Guinea, Thailand, and the northern parts of Australia.

✦ This fish can detect the electric field of a nearby animal, thus helping it to catch its prey more easily.

✦ The giant freshwater stingray has been declining in population for many years now. Loss of habitat ranks as the topmost reason.

✦ It is also hunted as a part of sport fishing, or sometimes gets caught in nets laid by fishermen. However, it is not really an aggressive animal and is not known to attack humans.

Pet Freshwater Ray
There are some species of freshwater stingrays that can be kept as pets. However, keep in mind that these fish require much more care than your regular pet fish, and some important aspects must be taken into consideration before you get your ray home. These important aspects are listed below.

Tank Size
✦ When you are buying a tank for your ray, first consider the size that it will attain as a full-grown fish. A minimum of 100 gallons is considered necessary per ray.

✦ Also, make sure that the tank is wide enough for your ray to be able to swim around in it comfortably. Ideally, it must be twice the width of the ray’s fins.

✦ If you have a large pond or pool in your house, then that may do too, with the required modifications like filters and heaters.

Decoration
✦ Remember that this fish is a natural digger, and its long fins are prone to injury. Thus, firstly avoid natural plants in the tank because your pet will uproot them. Plastic decorations are the way to go.

✦ Secondly, the overall look of a stingray tank must be minimalist because this fish is prone to injury by any sharp object in the tank.

✦ A pet stingray is also known to sit on tank heaters. Hence, to prevent burns on its skin, get plastic covers for the heater from the pet store.

Substrate
✦ As mentioned before, a stingray likes to hide underneath the sandy bottom of the ocean floor and wait for a fish to swim by, so it can become its prey.

✦ For your tank, avoid any sharp stones for the substrate. You can use sand if you have the time to check on it regularly so that it does not clog any of the tank equipment.

✦ Otherwise, you can use rounded, smooth pebbles or stones. The tank can also do without a substrate, but it will go against your pet’s nature, and your pet may not be so cool with it.

Water Quality
✦ Maintaining the pH level, temperature, and ammonia level of the tank water is very important. If there are severe fluctuations in any of these levels, it can be detrimental to the health of your ray.

✦ If you have a bigger tank, then the chances of any change affecting your pet adversely are lesser. Hence, a bigger tank is always better.

✦ Also, take care to clean the tank regularly, as stingrays are known to generate a lot of waste. Scoop this waste and any uneaten food at proper intervals, and change the water as and when you feel it is necessary.

Diet
✦ Food like shrimp and worms are suitable for this fish. You can also gradually begin feeding it frozen foods.

✦ As it is a carnivore by nature, foods like small fish, krill, prawns, pollack, etc., are suitable.

Tankmates
✦ The stingray is not exactly very social in nature. Two males cannot live peacefully in the same tank. Hence, preferably put one male and some females together.

✦ Other fish that are suitable to keep in a tank with stingrays are Oscars and Siamese Tigerfish. These species are calm and docile by nature, and hence make good tankmates. 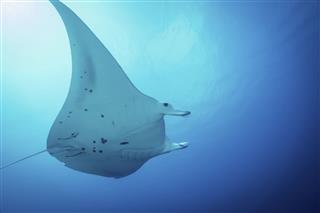 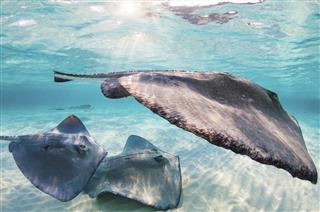