The gentle and affectionate vizslas need a lot of physical activity to thrive. Vizslas are highly intelligent and can be trained easily. 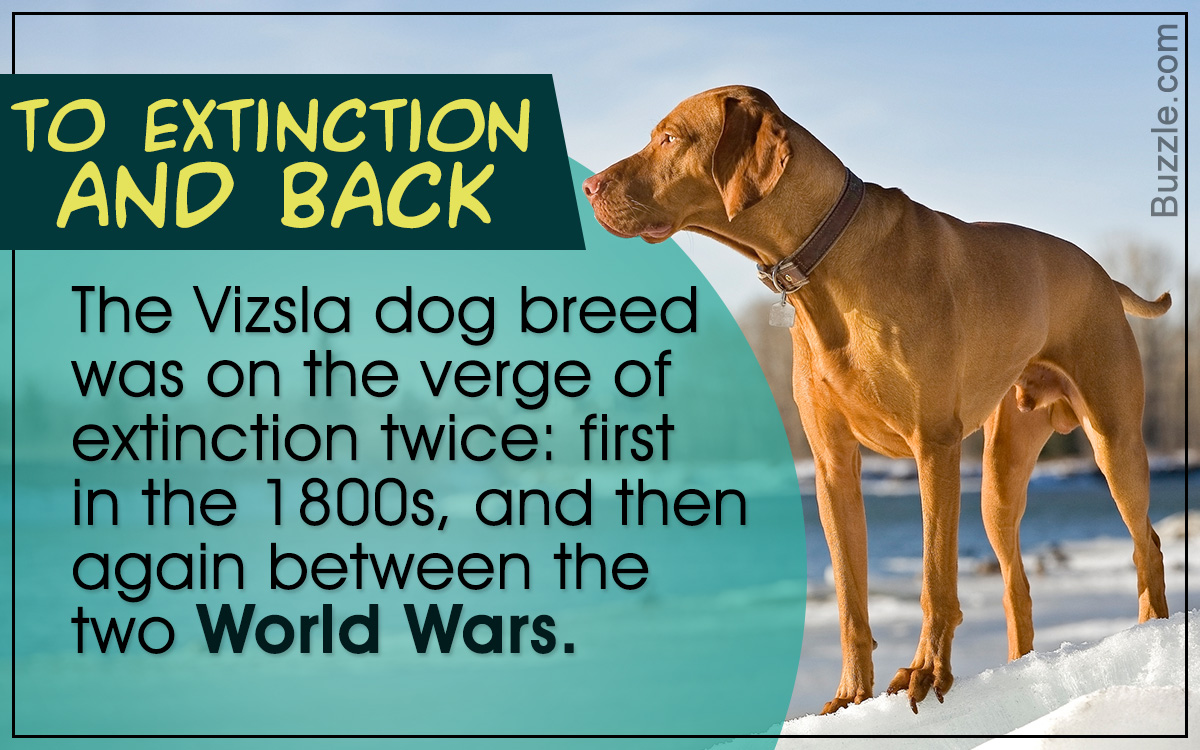 The gentle and affectionate vizslas need a lot of physical activity to thrive. Vizslas are highly intelligent and can be trained easily.

…that earlier, the vizsla breed was considered an elite breed that was owned only by Hungarian nobility.

The vizsla is an ancient dog breed that originated in Hungary. Vizslas are known for their muscular, yet elegant and athletic physique. This breed was developed in Hungary to be both a pointer and retriever for the hunters, and this is the reason why they possess the characteristics of both. The vizsla dog breed is also known as the ‘Hungarian Vizsla’, ‘Hungarian Pointer’, or ‘Magyar Vizsla’.

The vizsla dog breed is often confused with a few other breeds, like Redbone Coonhounds, Weimaraners, and Rhodesian Ridgebacks, as they closely resemble these breeds in physical appearance. However, vizslas can be distinguished by a much leaner, yet muscular body as compared to other dog breeds. Further, the nose of a vizsla is reddish in color that perfectly blends with the golden-rust color of its coat, unlike the other three dog breeds mentioned above.

Information about the Vizsla Dog Breed

The vizsla breed originated in Hungary. The ancestors of this breed were the hunting dogs of Magyar hordes, a tribe that settled in the Carpathian Basin (present-day Hungary). Vizslas were portrayed in primitive carvings as far back as the 10th century. However, the first written reference of this dog breed was found in the Illustrated Vienna Chronicle.

Vizslas were the companion dogs of warlords and barons of Hungary, who tried to keep the breed pure and enhance the hunting skills of vizslas. The breed managed to survive several major historical events, including Turkish occupation, Hungarian revolution, and World Wars I and II.

However, it was on the verge of extinction twice, first in the 1800s due to the rising popularity of the English Pointer and the German Shorthair Pointer, and again between World Wars I and II.

Vizslas came to the United States in the early 1950s. Soon, people developed an interest in this dog breed, which led to the formation of the Vizsla Club of America. On November 25, 1960, this breed was officially recognized by the American Kennel Club (AKC).

The vizsla dog can be distinguished by its lightly built and lean body with well-defined muscles, that gives the required endurance and agility to excel as a hunting dog. Despite having a short-coat, the vizsla dog does shed. However, it does not possess the typical ‘doggy’ smell’.

The most distinguishing characteristic of vizslas is their coat color. The standard coat color of this breed is solid golden rust. However, a solid rust color has also resulted from some breeding programs.

A coat color of solid, dark mahogany or red, that is pale and yellowish are considered undesirable characteristics. These shades are usually regarded as faults in the breeding program.

Some vizslas can have small white areas on their neck and forechest. However, such characteristics are usually not preferred. According to the AKC, the coat of a vizsla dog should be short, smooth, and dense. It does not have a woolly undercoat, which is why vizslas should not be allowed to live outdoors in winter.

Vizslas are known to possess long and low-set eyes and a reddish-colored nose. The ears are large and floppy, and are usually V-shaped. The ears lie close to their cheeks. The tail is held parallel to the ground, and is usually docked at two-third of its natural length, as per the guidelines of the American Breed Standard. However, in countries like United Kingdom, docking is banned.

Despite being an excellent hunting dog, vizslas are caring and affectionate. They need a lot of love and attention to thrive. These gentle and loyal dogs develop a strong bond with their owners, and this is the reason they are often referred to as ‘velcro’ dogs.

Vizslas are also friendly towards children and other dogs. They are known to interact by making noises, and moaning or whining. They can also cry if they feel neglected.

The vizsla dog is highly energetic and needs a lot of exercise to stay healthy and happy. Otherwise, it can become frustrated and develop destructive behavior. This dog is therefore not meant for someone who works for long hours. It can develop separation anxiety, which can also cause the development of destructive behavior.

Vizslas can be trained easily, as they are intelligent and love to learn new things. However, the use of harsh commands or physical corrections are usually not advisable for training these sensitive dogs. Rather, they should be trained with gentleness, consistency, and positive reinforcement.

Vizslas are excellent swimmers and fearless hunters. They are hardworking dogs who need to be kept busy. Their gait is smooth and graceful, and they have a tendency to trot instead of running, for which they are often compared to horses.

Some vizslas do have a tendency to become recreational barkers. This habit can become problematic if not checked early on. Vizslas love to chew a lot and it is best to provide them chew toys in order to protect your belongings.

Dog breeds like the Weimaraner, the Wirehaired Vizsla, and the German Shorthair Pointer were developed from the vizsla breed.

Vizslas are usually robust and healthy. But localized breeding programs that involve a small number of dogs may result in certain inherited diseases, like epilepsy, canine hypodysplasia, and lymphoma.

Vizslas are outstanding companion dogs. They are low to moderate shedders, and brushing their coat once in a week is sufficient. Vizslas are self-cleaning dogs and do not require frequent bathing.

Vizslas make excellent rescue and therapy dogs. You can make them your jogging partners as well, since they love long walks. A vizsla is an ideal companion for an active family, that can keep this dog occupied with different activities and exercise. However, along with exercise, vizslas also need your love and attention, as they love to stick to their human friends.