Facts About the Tokay Gecko

Leopard geckos are quite popular as pets in many countries, but when it comes to certain parts of Southeast Asia, Tokay geckos rule the market. So what is so special about this gecko? Let's understand some facts about the Tokay gecko, in the following article. 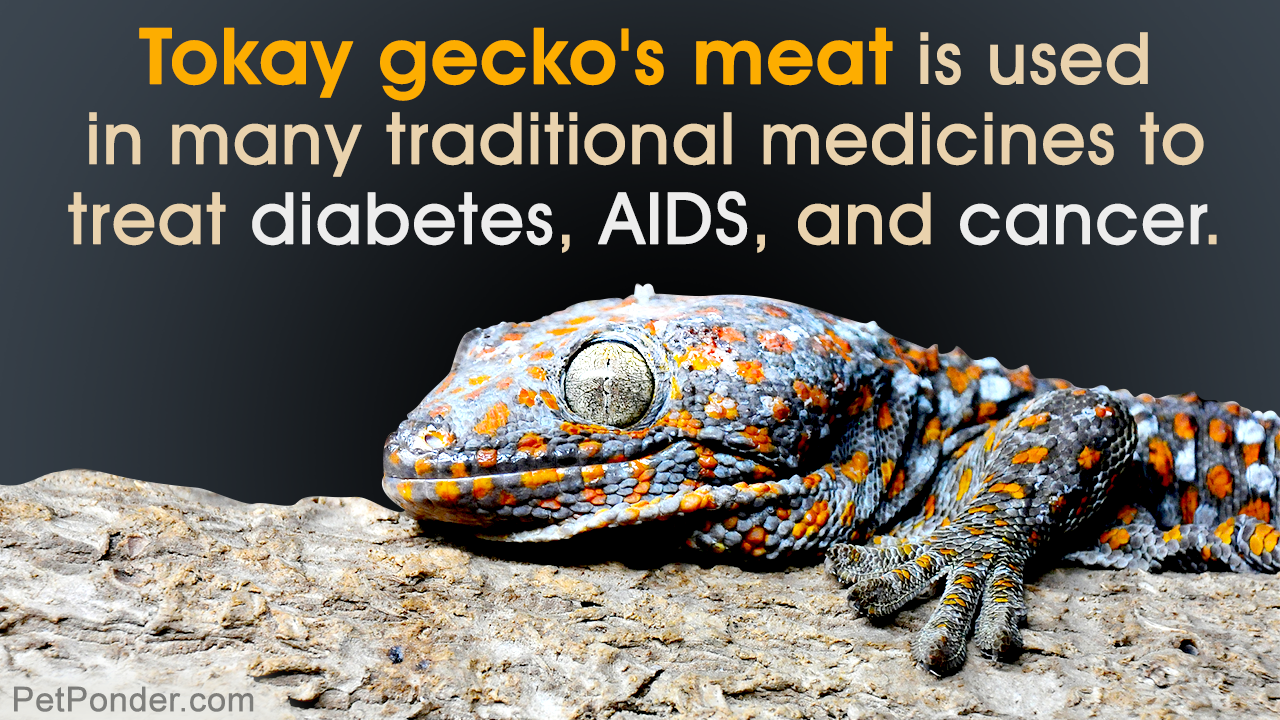 Leopard geckos are quite popular as pets in many countries, but when it comes to certain parts of Southeast Asia, Tokay geckos rule the market. So what is so special about this gecko? Let’s understand some facts about the Tokay gecko, in the following article.

An amazing fact about the Tokay gecko is its ability to cast off its tail when threatened. The dislocated tail distracts the predator by moving continuously for several minutes, thereby giving enough time for the gecko to escape. It takes almost 3 weeks for the gecko to get a new tail, and it is never as long as the original one.

With a length of 11 to 20 inches for males, and 7 to 19 inches for females, the Tokay gecko, also known as the Gekko gecko, is considered the second-largest gecko species in the world. It is a nocturnal arboreal gecko, with a cylindrical body shape, and its upper side somewhat flattened. It has a large head, and prominent eyes with vertically slit pupils. Tokay geckos are native to Southeast Asia, Indonesia, Northeast India, New Guinea, and the Philippines.

At present, the price of a Tokay gecko is almost $8,000 in the Asian market. Now, why would someone pay such a high price for a lizard? The answer lies in the world of traditional medicine, where the tongue of a Tokay gecko is seen as a cure for AIDS. Its meat is an important part of many traditional medicines that are manufactured as cures for diabetes, cancer, impotency, and various other medical conditions. Because of its high market value, catching and trading Tokay geckos has become a lucrative business option for many local tribes. As buyers are only interested in geckos that weigh 300 grams and above, those who come across smaller geckos rear them till they become adults.

An important thing to remember is that there is no scientific evidence that proves that the parts of a Tokay gecko can really help in curing these serious medical conditions. However, this superstition has been active since a long time, and refuses to die down.

Interesting Facts About the Tokay Gecko

► Tokay geckos were introduced in Texas, Belize, Hawaii, Florida, and several other Caribbean islands in the late 1980s, and hence can be considered an invasive species.

► The Tokay gecko was the first gecko to be scientifically named by Carl Linnaeus, the Father of Modern Taxonomy.

► They have a grayish or bluish body, with spots ranging from bright red to light yellow. The color of the eyes can be orange, yellow, and brown to greenish-brown. They also have a pineal body, or a ‘third eye’ on top of their head, that helps them sense light and darkness.

► Like every other reptile, even Tokay geckos display sexual dimorphism that helps differentiate males and females. The male is slightly larger in size than a female, and is also more brightly colored. Another blatant difference between the sexes is the minor swelling at the base of the tail in males, because of the two hemipenes.

► Tokay geckos are solitary in nature, and only meet the opposite sex during the mating season. They are extremely territorial, and will fiercely defend their space against other male geckos, and other animal species.

► The gecko gets its name ‘Tokay’ from its mating call which sounds like ‘To-Kay’ or ‘Tock-eh’. Its distinctive voice call resembles the call produced by the Large Forest Gecko.

► Tokay geckos have folds of skin that obscures its shadow while it rests on a tree. To protect themselves from predators, they open up the folds, which helps them blend in with the tree bark.

► They are insectivorous in nature, and feed on a variety of insects, small snakes, and other invertebrates that are small in size. Their only known predators are large snakes and humans.

► During the mating season, females release a liquid from their femoral pores to attract a male. The breeding season lasts about three to four months, during which males often mate with females, often grasping them with the mouth.

► Female geckos prefer sticking their eggs to walls, rocks, and holes. Eight to ten females often lay their eggs in a cluster together, each laying two. Many times, more than one female occupies the same nest. The eggs are extremely fragile and are covered with a sticky fluid; they harden up soon after they are laid.

► A Tokay gecko uses its nose for breathing, and for detecting several scents in their environment. The detection of scents is basically done by a large number of sensory cells found on a membrane in the nostrils. The task of detection is also performed by the ‘vomeronasal’ or Jacobson’s organ.

► Although the Tokay gecko is quite popular in pet trade, these reptiles are reputed to be tenacious, and can inflict a powerful bite if threatened, making them unsuitable for inexperienced keepers. The lifespan of Tokay geckos is estimated to be around 7 to 10 years in the wild, though in captivity, they can live for almost 10 to 20 years, if proper care is taken.

Although the IUCN lists them as a Least Concern species, the population of Tokay geckos is slowly diminishing. They are caught in large numbers in Asian countries due to their importance in the world of traditional medicine. They have already vanished from countries like Singapore, Myanmar etc., and if stricter laws for their preservation are not put in place, they will soon feature in the IUCN list of Extinct species.