Guppy fish give birth to live fry and do not lay eggs. They can survive in fresh as well as saline water, making them a truly unique species of fish. The guppy fish is adorably attractive, non-aggressive, and playful, and adds a whole lot of personality and color to any aquarium. 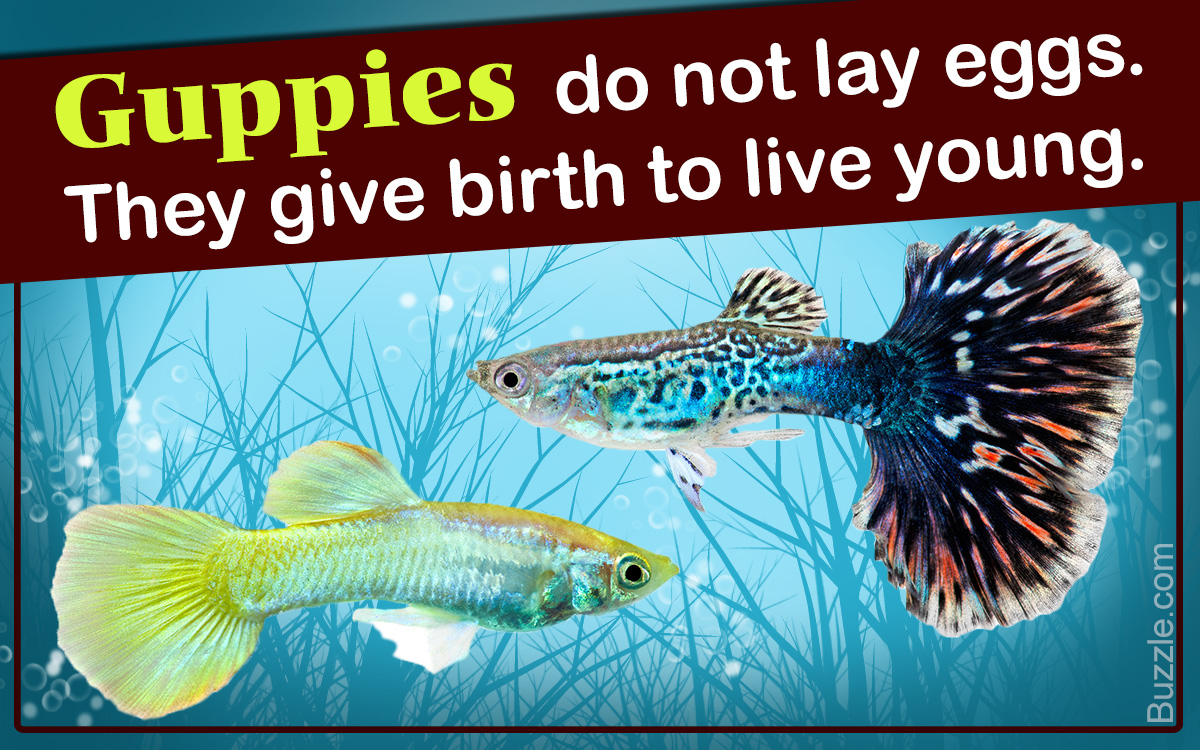 Guppy fish give birth to live fry and do not lay eggs. They can survive in fresh as well as saline water, making them a truly unique species of fish. The guppy fish is adorably attractive, non-aggressive, and playful, and adds a whole lot of personality and color to any aquarium.

The guppy fish (Poecilia reticulata) is a member of the Poecilidae species, which give birth to live fish and do not lay eggs. They belong to the order of Cyprinodontiformes, which are small in size, have ray shaped fins and are freshwater fish. The females are comparatively less attractive and larger than the males. Guppies are exquisitely colored and are a joy for people to watch.

Habitat and Feeding Habits of Guppies

Guppies were originally found in Trinidad, after which they have been introduced all over the world as an exotic fish. They are also used for controlling the spread of mosquitoes. The reason being that these fish feed on mosquito larvae, thereby significantly reducing the spread of malaria and dengue.

Guppies prefer living in warmer waters and enjoy dwelling in warm springs, canals, and ponds. They find temperatures of 23 – 24º C conducive for breeding and feeding. They will inhabit water bodies which have less predators, more green vegetation, and other smaller fish.

Guppies enjoy feeding on insects, algae and zooplankton (animal crust and fish larvae). These fish are able to survive in salty water as well if acclimatized, which is why many include them among marine fish in tanks. Guppies are able to breed in saline water with equal ease.

The gestation period for guppies lasts for 25-30 days, after which the live baby fish are born. During the gestation, the dimensions of the larvae can be seen through the translucent skin of the fish. Each female can give birth to 3-45 young ones, which takes about an hour and sometimes more.

Surprisingly, the females are ready for the next conception soon after giving her litter. The reason being that female guppies are able to store sperm for many months so they can reproduce without the need of males.

The baby fish are born survivors and are completely capable of looking after themselves. They must be kept in a separate tank because, bigger guppies eat the newborns, in order to control overcrowding of the water source. Males will sometimes attack females while giving birth, which is why the females in gestation must be placed in separate tanks. However if separated prematurely, the females can die of loneliness.

Guppies are prone to diseases such as fungal infection in the mouth. They can get infected in their wounds when nipped by other guppies and bigger fish. Tail and fin rot are caused due to bacteria, while viral hemorrhagic septicemia gets the blood infected. This causes sores and blisters to erupt, and causes the fish to tear from inside-out. Guppy fish cannot live in crowded tanks and will show their stress by swimming at a high-speed with erratic movements.

These fish make the tank look splendid, and their mostly non-aggressive nature will allow them to coexist easily with other small and peaceful fish.