The Egyptian fruit bat is a fascinating creature, and many people have started keeping them as pets. This PetPonder post enlists some interesting facts about this flying mammal. 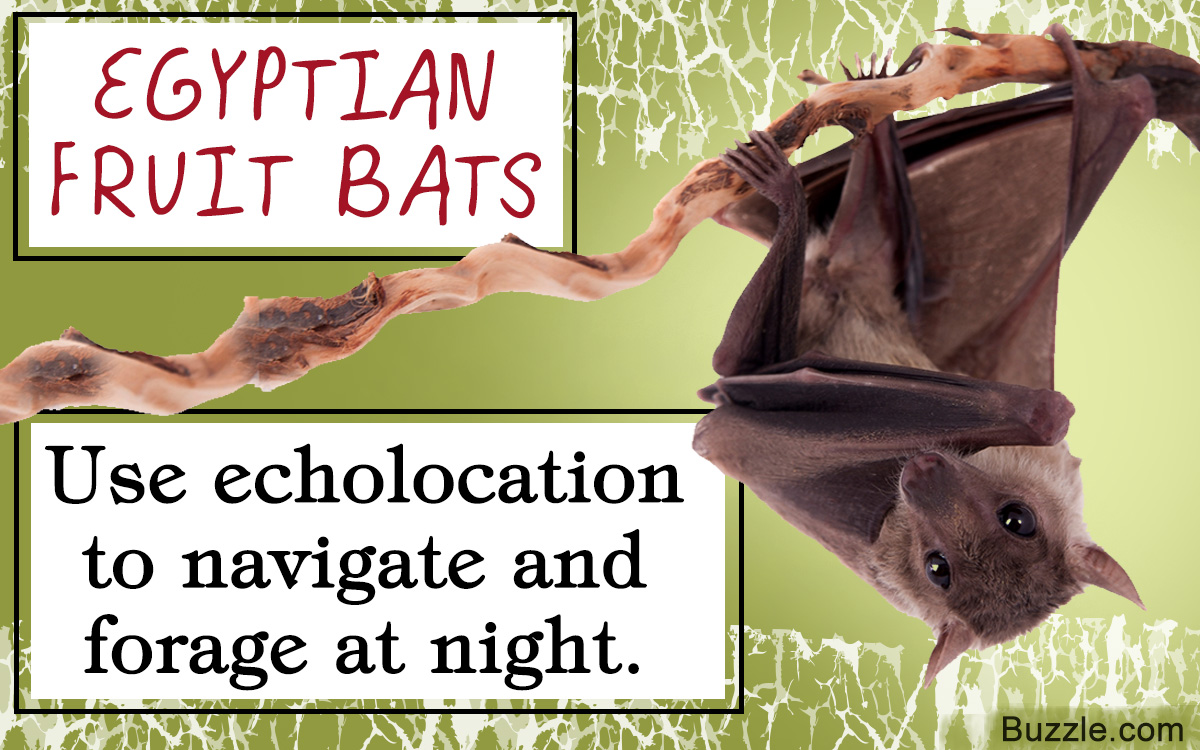 The Egyptian fruit bat is a fascinating creature, and many people have started keeping them as pets. This PetPonder post enlists some interesting facts about this flying mammal.

The Egyptian fruit bat is also called the Rousette fruit bat or the Egyptian Rousette. Its scientific name is Rousettus aegyptiacus. This nocturnal mammal feeds only on fruits. This bat does not hold any conservation status, as its distribution is very vastly spread over a large geographic area, and also due to its large population.

The Rousette fruit bat and other bats of the genus Rousettus are the only surviving species in the Old World fruit bat or megachiroptera bat, a.k.a. megabat, that use and rely on echolocation to help them navigate and find food. This feature of echolocation is present in only microbats, and not in any other type of megabat. So even though, this bat is very common, it has a few unique features that make it one of a kind. Given in this PetPonder write-up is a fact sheet of this nocturnal creature.

✦ The body length of the Egyptian Rousette ranges from 11-15 cm, and its wingspan is about 60 cm wide.

✦ The females in this species are smaller than the males.

✦ The males are easily recognizable due to their large scrotal sac.

✦ The average weight of these bats is around 160 grams.

✦ Their wings are very soft, as they are made up of soft skin with a layer of fine hair.

✦ They have a dog-like snout, due to which, sometimes, they are referred to as a flying fox.

✦ The Egyptian fruit bats have a light-brown colored body and dark-brown wings.

✦ Their colonies have thousands of members of their species and other bat species too.

✦ They are found in the sub-Saharan part of Africa, North Africa, east of Iran and Pakistan, and the Northern part of India.

✦ Their habitat ranges from arid biomes to deciduous, tropical deciduous, and rainforest areas.

✦ Even though they prefer forest cover, these bats are also found in urban and semi-desert regions.

✦ As their name suggests, these bats are frugivores, i.e., they feast on fruits.

✦ They feed on a wide variety of fruit, nectar, pollen, and fruit juices.

✦ For the sake of survival, this species of bats feed on insect- and fungus-damaged fruits, and are found in arid areas.

✦ These bats eat only the pulp and juice, whereas, the seeds are chewed and then spat out.

✦ Egyptian Rousettes are polygamous mammals, who mate twice a year.

✦ The bats of this species that are found in latitudes to the south of Egypt, have been
observed to have two distinct breeding seasons―spring to summer and fall to winter.

✦ The gestation period of Egyptian fruit bats is approximately 4 months, and they give birth to one pup. In very rare cases, twins are born.

✦ Newborn bats cling to their mothers for about 6 weeks, till they are strong enough to hang from the roost.

✦ At about 3 months of age, when the bat pups can fly, they leave the roost to gather their food.

✦ Since bats live in colonies, even when they reach maturity, they live in the colony that they were born in.

✦ Egyptian fruit bats are protective about their food, and tend to fight with other bats if any bat attempts to steal their fruit.

✦ They are nocturnal mammals, who forage for food from twilight till dawn.

✦ During the day, they hang upside down from their roost, with their body wrapped up in their wings.

✦ Other bats of the genus Rousettus, including the Egyptian fruit bat, make use of echolocation to forage and navigate at night.

✦ They emit a series of sharp clicks, (which are usually slow and constant, but speed up when they approach an obstruction or object) using their tongues.

✦ These bats also produce grunts and screeches if they have to communicate with each other.

✦ Their vocalization can get very loud and disturbing, because of the size of their colonies.

✦ The Egyptian fruit bats can easily adapt to a life in captivity; therefore, more and more people today, are keeping them as pets.

✦ Due to commercial farming, these bats are hunted, as they have a tendency to devour the harvest, due to their frugivorous nature.

✦ Farmers poison, trap, and kill them, as they are considered pests so that their farms are not affected.

✦ The Egyptian fruit bats living in Africa have a likelihood to carry the Marburg virus which is related to the Ebola virus.

Even though these bats are not listed by the IUCN, care must be taken about their conservation. They may look scary and weird, but they are very important for the ecology of the Earth, as they help in the pollination process.