Horses, normally, do not venture out in the open if they are provided with the basic necessities inside the yard. However, on certain occasions, a horse might be tempted to go out on the street, and that may turn out to be dangerous. Hence, it is important to keep them inside. How, you ask? An electric horse fence is the answer.

Horses, normally, do not venture out in the open if they are provided with the basic necessities inside the yard. However, on certain occasions, a horse might be tempted to go out on the street, and that may turn out to be dangerous. Hence, it is important to keep them inside. How, you ask? An electric horse fence is the answer.

Horses exhibit personality traits that are very much similar to human beings. They do not like to be trapped in enclosed areas and they love to roam freely, though within the yard. They hate walls and other opaque surfaces which prevent them from seeing the outside world. However, if they are supplied with adequate food and water, they are unlikely to break the barrier and go out. However, certain circumstances may force a horse to break the barrier and set itself free. Hence, it is necessary to install a fence that can successfully ‘contain’ the horse inside.

Invisible fencing does not work well with horses as they are likely to get tangled in the wires that are barely visible. Wooden or concrete barriers are dangerous, because the horse might try and break them if it is determined to go out. Horses act on instincts when they panic and get themselves seriously injured.

Electric fences have been criticized for being painful to animals. Yet, one can’t deny the fact that they are very much effective in keeping animals, like horses and dogs, inside the yard, where they are safe.

Modern fences come in broader braids and colored ribbons in order to provide better visibility. They have three components …

The working principle of this fence is fairly simple; the circuit completes only when the horse comes in contact with the fence and ground. The energizer and ground system have a gap between them, which prevents the circuit from completing. The horse touches the fence and the circuit is completed, allowing the charge to pass. This charge flows through the body of the horse, resulting in a mild shock. Though the shock is not very painful, it is enough to startle the animal and prevent it from coming anywhere near the fence in future.

The cost incurred on installing an electric fence will depend on the perimeter of your yard. On an average, it will cost you anywhere between 48 to 75 cents per foot. While critics call for a ban on this system citing the pain it causes to the animal, horse-keepers do vouch for the safety and effectiveness of this fencing. 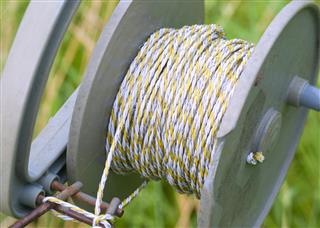 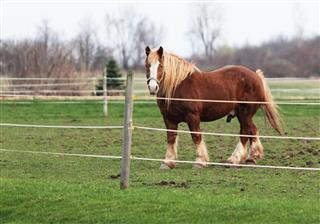