The Catahoula Leopard dog is an excellent working dog breed that can be tamed after providing it with proper training. This article lists some more facts. 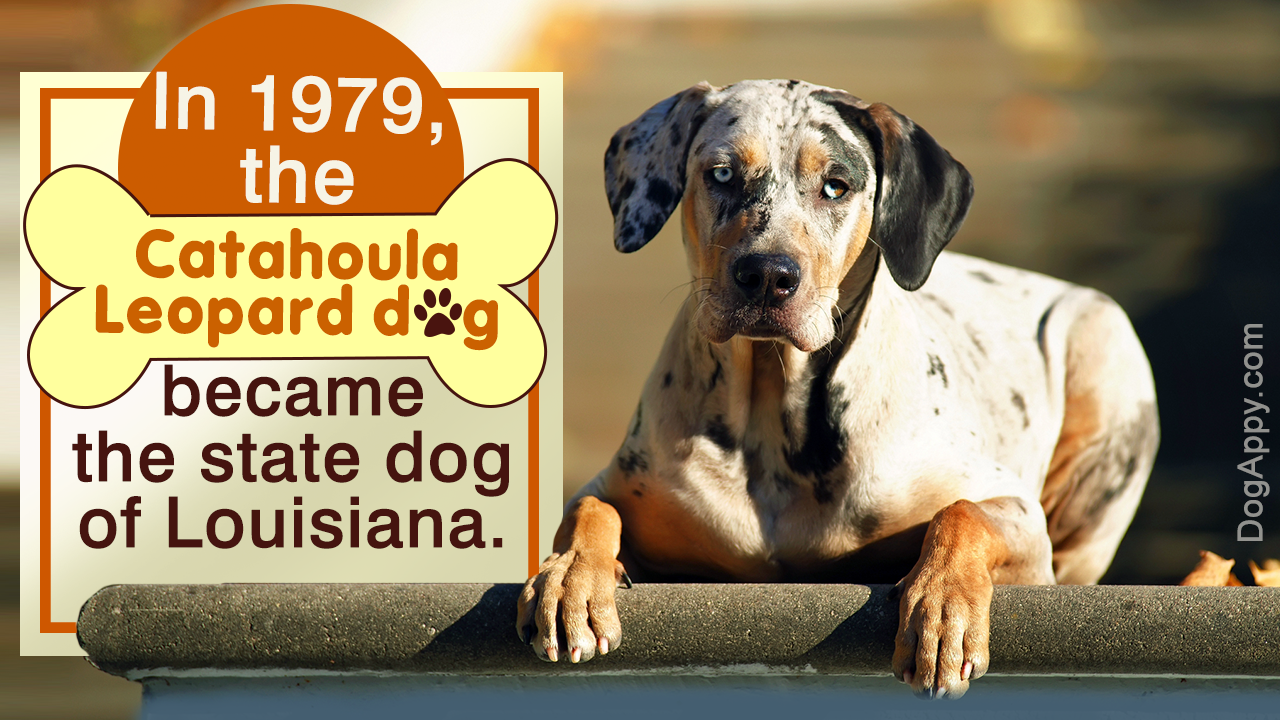 The Catahoula Leopard dog is an excellent working dog breed that can be tamed after providing it with proper training. This article lists some more facts.

Some dogs of the Catahoula breed can climb a tree. This dog has long, sharp, and hard nails, which assist it in climbing a tree. For this and its intuitive nature, it is also known as cat dog. It is also known as Catahoula Cur, Catahoula Hog Dog, and simply Catahoula. It is named after the Catahoula church located in Louisiana, United States. According to American native language, Catahoula means “beautiful clear water”. In 1979, this breed was designated as the state dog of Louisiana. It was brought to America by the Spanish explorers and first used to drive out wild animals.

This dog is almost up to 24 inches tall and weighs up to almost 90 pounds. It has a long tail, natural flop ears, and comes in a variety of colors with spots. All the curs have blue, glass, or marbled eyes. Some of them have cracked eyes too. This breed has prominent webbing between the toes, which helps it walk on marshy areas and swim.

This dog has a short, smooth, and dense coat in different colors such as blue, gray, white, black, brown, yellow, and patched. Usually, patches include a combination of prominent white and other colors. As it is a single-coated dog, it needs to be kept in a warm place during the winter and is easy to maintain.

This dog is independent by nature. It likes to roam freely in an open space and often feels caged in city houses. It can be tamed if trained and exercised properly. It is strong and assertive enough to defend itself from all kinds of counter attacks. The behavior of this breed is similar to that of guard dogs. It is protective towards its master. Besides, it is very much loyal and affectionate towards its master and remains aloof with strangers. It is friendly with kids. One interesting fact about this dog is that it is fierce by nature and likes to fight with the prey.

This breed lives up to almost 14 years. It has been seen that white-coated dogs fall prey to hearing loss or blindness. Other common illnesses which affect this breed are tunnel vision, hip dysplasia, and cancer.

As a Work Dog

It is mostly known as a working dog because of its herding, hunting, and climbing ability. It is intelligent and enthusiastic by character. Like the African wild dog, it can be engaged in all kinds of herding, searching, rescuing, and hunting. Generally, groups of dogs are engaged in hunting small animals like pigs, deer, squirrels, black bears, and sometimes raccoons. In case of herding, this dog is used for herding sheep, cattle, and pigs. However, it needs training lessons such as chewing garden hoses, digging large holes, and running. These training lessons can help it hunt and herd more efficiently. It is an expert and energetic working dog.