We all have heard that two is better than one, but what if you got two in one? Enter the Catahoula Bulldog, a mix of the Catahoula Cur and American Bulldog. DogAppy gives you all the information you need on this loyal and protective breed. 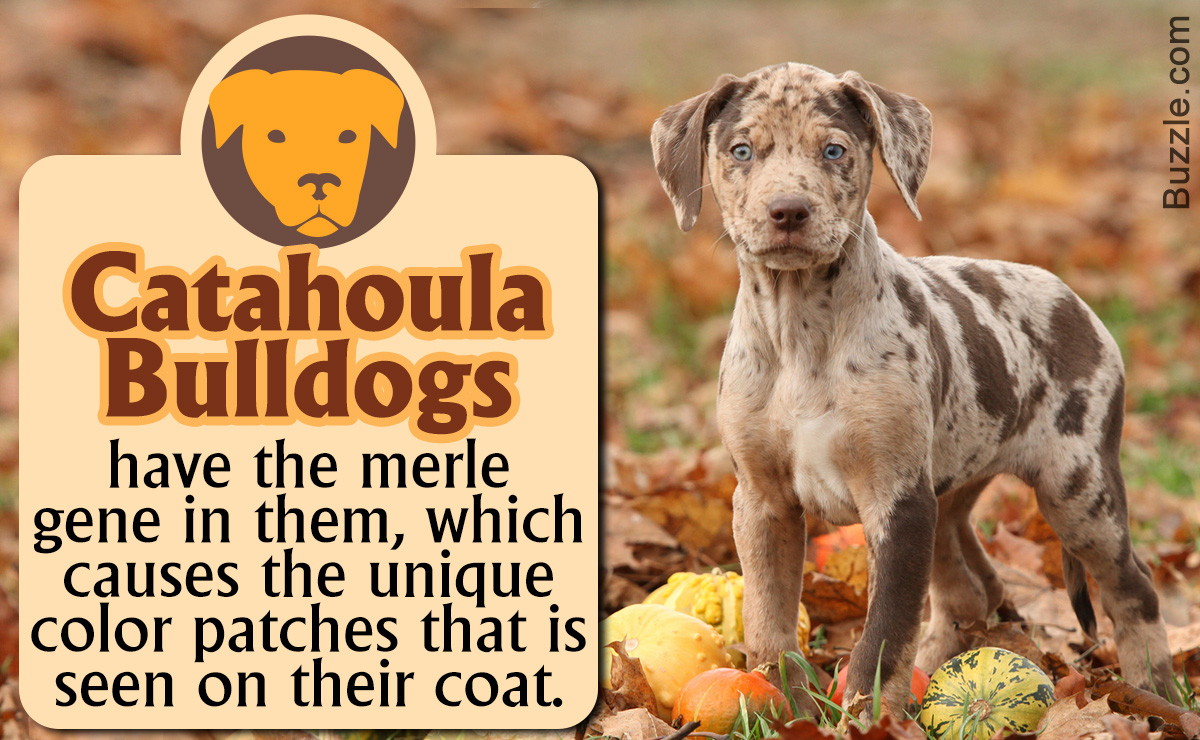 We all have heard that two is better than one, but what if you got two in one? Enter the Catahoula Bulldog, a mix of the Catahoula Cur and American Bulldog. DogAppy gives you all the information you need on this loyal and protective breed.

The Catahoula Cur, which is one of the parent breeds of the Catahoula Bulldog, had its name changed to the Louisiana Catahoula Leopard Dog in 1979, and was made the official state dog by then-governor Edwin Edwards.

Catahoula Leopard dogs are known to be intelligent, assertive, energetic, and mild mannered. They are protective and make for great hunting or tracking dogs. On the other hand, American Bulldogs are known to be great catch-dogs―aggressive when needed yet active, social, attentive, and emotional at other times. So, what happens when you mix the two?

You end up with a highly evolved and practical dog that can hunt and protect, while at the same time, prove to be the perfect companion! The Catahoula breed has been around for over a hundred years, mostly in Southern America and was bred for its unique hunting and guarding qualities. Mr. Stodghill of the Animal Research Foundation was the first to register Catahoula Bulldogs in 1951, and in 1968, Mr. Barry Perry of Texas became the first ARF Certified Breeder of the same. Has this piqued your interest? Read on to know more about the Catahoula Bulldog’s temperament, behavior, appearance, and other important information.

The Catahoula Bulldog weighs in around 65-100 pounds, with a height of 24-26 inches, making them medium-sized dogs. The first generation may be a 50-50 composition of both the parent dogs. The subsequent generations may be a 75-25% composition, leaning either more on the Catahoula Cur’s characteristics or the American Bulldog’s traits. They have short and smooth coats and are known to come in a wide array of colors ranging from black, white, or brown. Consequently, they may be black and white, black and brown, or white and brown. A distinctive feature is the merle gene, which they inherit from the Catahoula Leopard dogs, which give them red, blue, black, brown, or tan patches. They also have marble-like eyes, which can be either cracked (one eye with a combination of two colors) or heterochromic, ranging from dark brown, light blue, emerald green, golden, amber, or a combination of any of the mentioned colors. They generally don’t have undercoats, but may grow one depending on the climate they is grown and bred in. It has a medium-length snout and ears that may be button-like or flappy, and can be cropped based on the look you are going for.

The Catahoula Bulldog mixed breed are loyal and devoted to their owners and other people alike, with a need to be pampered. They are hardworking dogs, which are intelligent, agile, and energetic. They are mild-mannered and laid-back, but can be aggressive and assertive if they feel like the situation calls for it. The reason they were bred was to combine the hunting intellect of the Catahoula Leopard Dog with that of the aggressive, capturing skills of the American Bulldog, which also provides a strong body and jaw. They are also very alert, which makes them good guard dogs or tracking dogs also. The females tend to be more dominant than their male counterparts. They are fun-loving and quick learners too, which makes them easy to train from the get-go. It is one of the most unique-looking breeds around, a beauty if we may say so!

Being a highly energetic dog, Catahoula Bulldogs require a larger space, preferably with a nice open space or backyard around, where they can move around and expend their energy freely. Alternatively, they can be kept in apartments, provided their dietary and exercise needs are maintained.

Since these dogs exert more physical energy, they need to be regularly exercised for a minimum of two to three hours daily, and a well-balanced diet is required to ensure the dog remains healthy. They enjoy long walks and a lot of playtime, and your kids and you are sure to have an awesome time with this bubbly breed!

This dog makes your life so much easier, because it barely sheds and requires minimal brushing. But do make sure that you give it a good bath at properly timed gaps!

Catahoula Bulldogs are eager to please and highly intelligent, which make them easy to train right from the start. In case you plan to breed them, then you have to train them from an early age based on your requirements. They are aloof at times with strangers, so socializing and getting them accustomed to people at an early age is important, especially if you have kids.

This mix breed has a lifespan of 13-15 years and are generally healthy dogs, but they are prone to hip dysplasia, which it inherits from both parents, and may have loss of hearing or sight eventually (in only one year and either eye). This should be checked-up on every once in a while to make sure your dog lives a full and happy life!

Dogs are a man’s best friend they say, and wasn’t that a wise man (or woman)? But there is more to them than that, and there is so much we can both teach and learn from them. So if you’re looking to adopt a dog, this would make for a nice first breed.