Gripping Facts About the Armadillo Lizard

Though they are not related to each other, armadillos and armadillo lizards share a common trait - an armored body, which they use for defending themselves from predators. 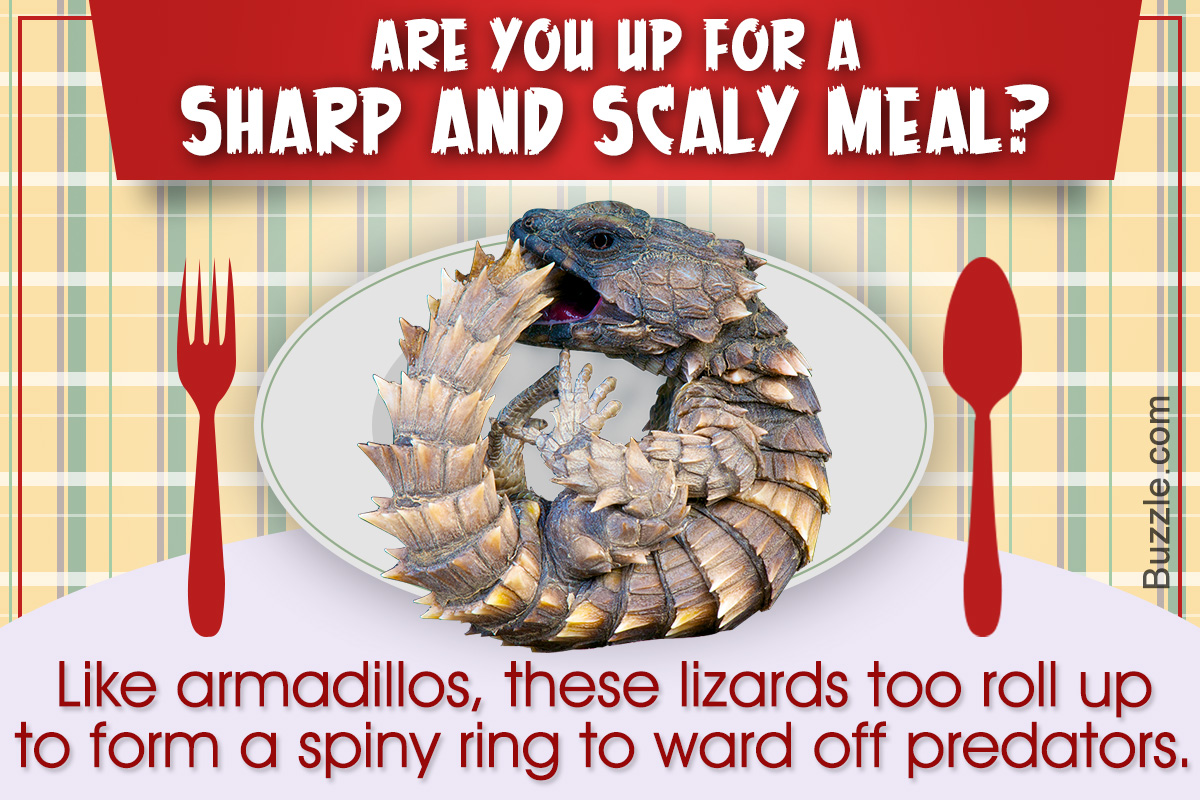 Though they are not related to each other, armadillos and armadillo lizards share a common trait – an armored body, which they use for defending themselves from predators.

Can you visualize a lizard with an armored body? No, the reptile does not have a helmet or a bulletproof vest, like the mighty humans. However, they possess an inbuilt armor in the form of a hard, scaly and spiny skin. Armadillo lizards (Cordylus cataphractus) are found in the African deserts. With the ever-increasing fascination for exotic pets, these lizards too are hunted for pet trade, which is one of the main reasons for their dwindling population. They are now listed ‘VULNERABLE’, by the International Union for Conservation of Nature (IUCN).

How to Identify These Lizards?

Spines: The defensive posture of armadillo lizards involves the display of spines to scare away predators and enemies. They have spiny scales covering almost the entire body, including the tail, limbs, neck, and head. The scales on the body are usually found to be arranged in girdles. So they are also known as girdled lizards.

Color: Armadillo lizards are usually brownish yellow in color. The color may range from grayish brown to dirty yellow with brownish blotches. The ventral part sports a comparatively lighter shade of yellow. The upper lip is usually dark brown. Their body color may slightly vary with different species.

Structure: Armadillo lizards have a slightly flattened head and a stocky body. The flat body structure helps them to squeeze in and crawl out of cracks and crevices easily, so as to escape from predators. The head is triangular in shape.

Why The Name Armadillo Lizard?

Do Armadillo Lizards Drop Their Tail?

Though tail autotomy is one of the strategies that lizards use to escape from their predators, this practice is not so common in armadillo lizards. This is because of their unique defensive posture, which requires the tail to be held tightly in the mouth. However, if there is no other way, they are found to drop the tail as the last resort. The tail will grow back slowly.

Range and Habitat: Armadillo lizards live in the deserts along the west coast of southern Africa. Their habitat includes dense vegetation (comprising shrubs and small trees) and rocky areas, as they require hiding spaces to escape from predators and to hibernate. These lizards are well adapted to desert life.

Prey and Predators: They usually feed on insects, especially termites. Their diet includes spiders, scorpions, millipedes and beetles. Primarily, they are carnivores, but these lizards may also eat plant material (leaves and fruits). Though the defensive mechanism of armadillo lizards is an effective deterrent for most of the potential predators, birds of prey feed on them.

Behavior: Armadillo lizards are mostly found in groups of around 2 to 60 members. Usually, a group comprises an adult pair with juveniles and sub-adults. Sometimes, all the members of a group share a single crevice. They change groups frequently, especially during mating. Males are highly territorial and are found to mate with females in their territory only. However, females may move out of the group and mate with other males. These lizards are active during daytime and are slow-moving. Communication is mainly through movements of tail, head and tongue.

Reproduction: While most of the lizard species are egg-laying in nature, armadillo lizards are among those who give birth to young ones. Usually, breeding takes place during spring. After a gestation period of around six to eight months, females give birth to a single (rarely two) offspring. During birth, the newborn has an average body length of seven inches. They are born with a thin membranous body cover, which they break open after birth. Mature lizards are ready to breed, when they grow to a length (snout-to-vent) of about ten centimeters. Though it is unusual for lizards to take care of their young ones, armadillo lizards are found to protect their offspring and even provide them with food.

Being docile in nature, armadillo lizards are preferred as pets. They don’t retaliate when threatened, and instead try to hide or roll themselves into a ring. However, it is better to let them live in their natural habitat, as they are listed as vulnerable species. Trade of armadillo lizards is illegal in South Africa. If you are really crazy about lizards and still want to adopt an armadillo lizard as a pet, make sure that you have a basic understanding about their requirements. You have to provide them with a suitable environment. If you have two to three armadillo lizards, you need a 20-gallon tank covered with a screen lid. The bottom of the tank must be covered with a thick layer of sand, rocks with crevices and branches. You must clean this substrate regularly and change it once every month. You have to use full spectrum reptile bulbs for this cage. A thermal gradient inside the enclosure will be beneficial. The enclosure must have an average temperature of 85° F. You must also create a basking area with a heat lamp set to 120° F. Place a bowl of clean water, which has to be refilled on a daily basis. Use feeder insects like meal worms and crickets for your pet. With proper care, these lizards may live up to 20 years in captivity.