Giant anteaters are listed among the 'endangered' species in the world. Their habitat is being destroyed by our kind continuously, which arises the need to work on some damage control. There are many people who are willing to take the initiative in order to conserve these creatures; many also keep them as pets. However, taking care of these exotic pets is a bigger responsibility, making it necessary for the owner to learn the prerequisites for the same. 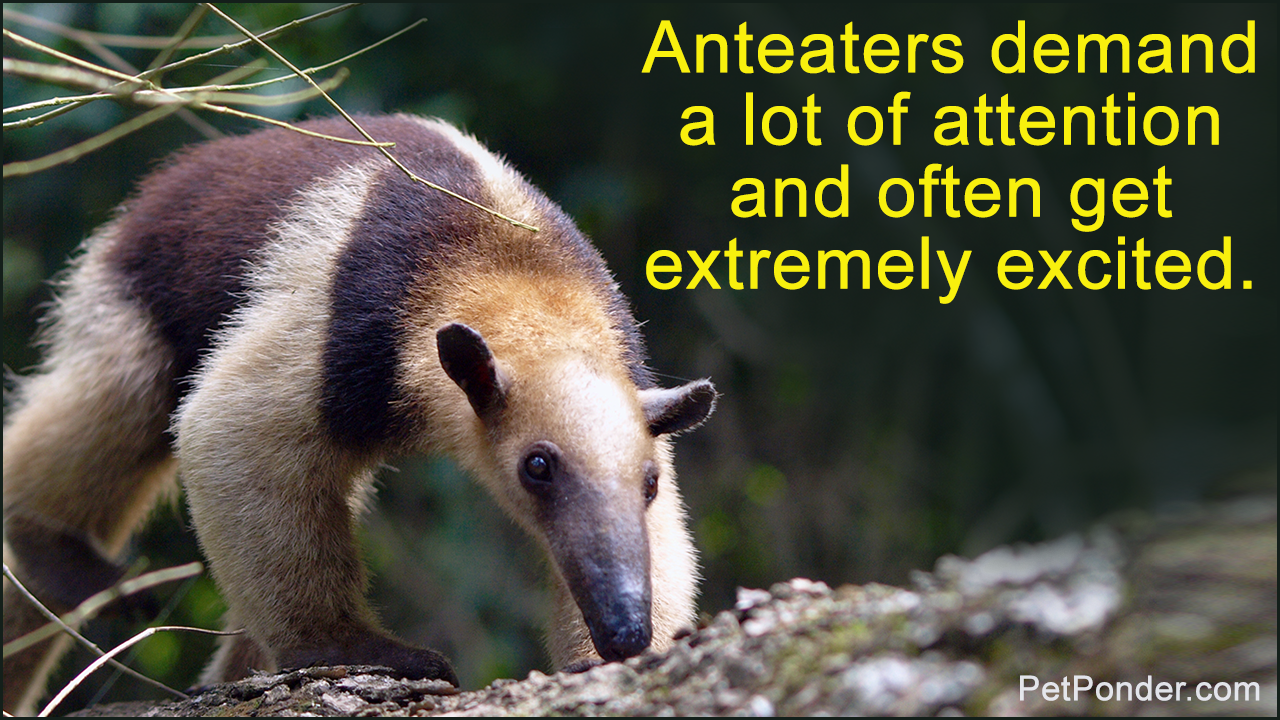 Giant anteaters are listed among the ‘endangered’ species in the world. Their habitat is being destroyed by our kind continuously, which arises the need to work on some damage control. There are many people who are willing to take the initiative in order to conserve these creatures; many also keep them as pets. However, taking care of these exotic pets is a bigger responsibility, making it necessary for the owner to learn the prerequisites for the same.

Anteater – who could have ever thought that such an animal could be so expressive? It’s all in their eyes. There are so many great storytellers other than humans.
– Robert Mitchum

Anteaters are wonderful creatures; contrary to how they appear to be, you will be surprised to know that they can be as loving and expressive as dogs. Once you keep them as pets and take good care of them, they will respond to you when you call out their names, they will also demand lots of attention from you, make different sounds depending upon how they feel … yes, anteaters are very expressive! It’s a shame that due to human intervention, their existence is under threat. Among the different species of anteaters is the giant anteater, which is listed vulnerable when it comes to its conservation status. Other species are the silky or pygmy anteaters, the southern tamanduas, and the northern tamanduas, which are not threatened as of now.

There are different species of anteaters that you can choose to keep as pets. The silky or pygmy anteaters are very small in size; the tamandua anteaters are medium-sized; and the giant anteaters, as the name suggests, are the largest species! Different species have different distribution. However, they are mostly located in parts of Mexico, Central America, South America, Colombia, Ecuador, Trinidad, Brazil, Bolivia, Argentina, Peru, etc. Many people go for the silky anteater to keep as a pet, which belongs to the tiny category and is equally cute and adorable.

Before you go ahead and choose them as your pets, you must be sure whether they would be ‘your’ ideal pet or not! If you are the sort who wants pets without the problem of taking extra-special care, attention, etc., then you must let go of anteaters, and opt for a fish bowl instead! Consider keeping anteaters, the same like keeping dogs as pets. They may be wild, but when they are at ‘home’, they need the extra care. What does the ‘extra care’ include? This is discussed as under.

Can they Live Where You Live?

For dogs, you can build a dog house, but as far as anteaters are concerned, their living space, depends upon the type of anteater! If you have a silky anteater, which is arboreal, then this tiny mate would need a place with lots of trees in the cage. You can use cat tree houses for your silky anteater. Even the tamandua would enjoy that ambiance, as it is semi-arboreal — thrives on both land and trees. As far as the giant anteater is concerned, it is very much terrestrial — it lives and thrives on the land. So the cage must be extremely spacious, accessorized with some interesting objects that will appeal to your pet. A hammock is a good choice to start with. They love relaxing on it! Also, adding some ropes in the cage is a must, since your pet can hang and swing from one rope to the other. Decorating the cage with some interesting toys, pillows, and blankets would make it more inviting and comfortable.

Can They Eat What You Eat?

As the name suggests, ‘ant’ eaters are the ones who eat ants, right? But if you think that’s the only food they survive on, then you are wrong! I mean, it’s not possible to find enough ants! Did you know that a giant anteater can eat about 30,000 ants in a day? You can look for ants in your backyard, or an even better option would be to let them hunt for ants, bugs, and termites themselves! They won’t be able to find 30,000 ants, of course, but they will definitely enjoy having them as a snack! The other food items ideal for anteaters would be blue cheese, wheat bran, fruits, vegetables, avocados, spinach, flax meal, thyme, etc. You can also feed them meat mixed with these ingredients, especially beef, which is something they really like to eat! Also, make sure that you don’t feed them with too much sweet. Sugar is bad for anteaters.

The most adorable thing about anteaters is that they love to play and roam around! They wrestle playfully, so you need to make sure that you trim their claws once in every 3-4 days, or else the playful gesture might end up hurting either you or the pet itself!

Another ‘important’ tip, a necessity rather, would be to take your pet anteater for long walks, at least once in a day. Their ‘pee’ has an extremely strong skunky smell, so taking them out for walks would be a good idea. It is also ideal to put a leash around their neck, just like a dog. They are harmless, but may be tempted to climb up the tree or run away chasing an ant or a bug!

Dosage of Love and Care

For starters, anteaters are very demanding, especially when it comes to ATTENTION! That’s right! Anteaters demand a lot of attention, and the best/worst part is that they are very expressive when they get (or do not get) the attention of the keeper!

They cry if you don’t attend to them, they also make the hissing noise when they feel protective. In short, the more attention and love you give them, the better it is. If you are the one who wants pets which are expressive and playful, then anteaters are among the best choices you have.

Unlike cats and dogs, anteaters aren’t “common pets”, they are exotic, and if you happen to have the giant anteater, then you need to be more cautious because it is a threatened species. Apart from the necessity that you need to have all the possible knowledge about this species, it is also important for you to know people, who professionally take care of anteaters, like zoo keepers and veterinarians.

Like all other living beings, even anteaters are prone to problems related to behavior, environment adaption, diet, and health. Some of the problems that owners may come across include – not consuming proper meals, digging the walls, urinating all over the place for markings, and so on. It is important to train them, which will only happen over time. Health problems may include diabetes, heat sickness, skin infections resulting from fleas, mites, etc. They are also prone to heart diseases, problems related to liver and kidney, obesity, and so on. Salmonella poisoning can also be encountered. Another common problem that I’d like to mention is the entangling of food around their tongue which could become fatal if not addressed on time; this is the reason why professional involvement is a must.

Anteaters are exotic pets and therefore, are costly. The younger, healthier, and prettier the anteater, the costlier would it be! They generally range from about $1,400-$5,000. Many a time, it takes about a year for someone to get their anteater pet, because they are so rare. This is why it is important for you to research properly, and decide if you would like an anteater as pet. They are known as the ‘delicate keeper’! If you are certain that you would be able to provide this animal with appropriate basic necessities, amenities, care, love, and professional assistance, only then take the initiative of keeping them as pets. It’s another life that you are dealing with, so make sure you have the ability to flourish it with justice.